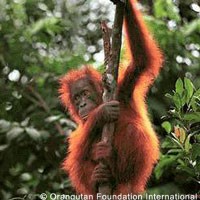 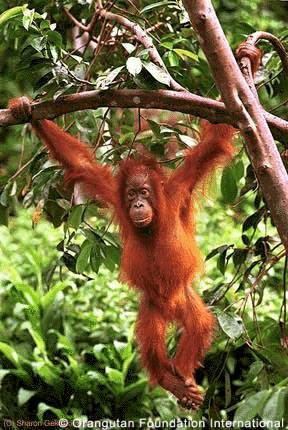 Seven year old Anthrax is a wild orangutan living a free and “normal” life in the forests of Borneo. Anthrax was born in the wild to Akmad, the first Camp Leakey ex-captive to give birth. Dr Birute Galdikas’ son, Binti, named him.

One afternoon last year in Camp Leaky, little Anthrax was the focal point of quite a commotion. My husband, Marty and I saw him cross paths with Unyuk and her baby near the cook’s house, while his mother Akmad, watched from a distance. Next thing we knew Unyuk, with young Uling clinging on for dear life, was chasing Anthrax through the trees and making some very threatening noises. We have no idea what caused her to chase after Anthrax, but he knew she meant business and took off screeching. Although very agile, he was no match for Unyuk’s speed and determination. A minute later she had him cornered in a tree and he looked scared. That’s when Akmad quickly went to his rescue. She made some threatening noises of her own and chased Unyuk away from a very relieved Anthrax.

Orangutan of the Month for August, 2018: Robina