*The most recent survey, however, indicates 14,000 individuals. 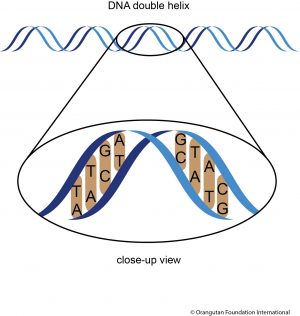 Figure: DNA
Each DNA molecule consists of two strands that form a double helix. The specific order of the four letters A, G, C and T in each strand encodes the information contained in the genetic material.

Genetic information is stored in the form of DNA. The alphabet of the genetic code consists of the four letters A, G, C, and T, which are abbreviations for the chemical names adenine, guanine, cytosine, and thymine. The specific order of the four letters encodes the genetic information and serves as a template for the production of the molecules that are required to build every single cell in the body and to keep it functioning. Every time a cell divides, its DNA is copied so that each new daughter cell receives a complete set of instructions on how to build the molecules of the cell. In a similar way, instructions are passed on from parents to their offspring, and DNA is accordingly known as “hereditary material”. Since DNA is passed down from generation to generation, it provides a record of our evolutionary history. New DNA sequencing techniques have enabled us to sequence whole genomes (the entire genetic sequence of an organism) and facilitate their detailed analysis. Comparisons of DNA sequences between species and within individuals of the same species have, in recent years, provided surprising new insights into the evolutionary history of the great ape family that had previously been difficult to obtain via other methods. 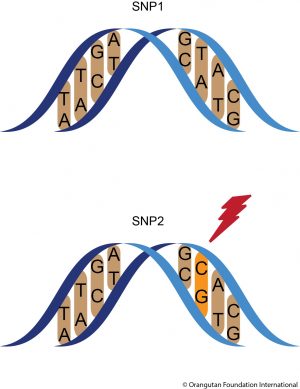 Figure: SNPs
A single nucleotide polymorphism or SNP is the change of a single letter in the genome. While the first individual maintains the original T, the second individual carries a C at the same location in its genome. In the human genome, SNPs occur on average at every 300th letter. In the orangutan genome, SNPs occur twice as frequently, as they are found at every 149th letter.

Since orangutans and humans shared a common ancestry until about 14 million years ago (see part 1 for a family tree of the great apes), long stretches of their DNA are very similar, meaning that the order of the four letters is almost the same, with only minor differences. Although the cellular process of duplicating DNA is very accurate and cells also have repair mechanisms to correct damage and copying errors, sometimes a different letter is incorporated (e.g. a C instead of a T). The incorporation of a different letter is called a mutation, and it can lead to what scientists call a “single nucleotide polymorphism” (short SNP, pronounced “snip”). As a result, certain individuals in a population retain the original T, while others carry a C, making their DNA distinct at this specific location. Comparison of SNPs is an important tool that helps researchers estimate how closely related two individuals are: a person will have many of the same SNPs as their sibling, but fewer matches when their DNA is compared to the DNA of a cousin, and even less when compared with an unrelated friend. In the orangutan genome, SNPs occur, on average, twice as often as they do in the human genome. At first thought, one might have expected the opposite: after all, humans show great variation in their outer appearance such as color of their skin, hair and eyes. Compared to these stark differences, the variations between Sumatran and Bornean orangutans appear quite subtle: the hair of Bornean orangutans is darker than that of their Sumatran counterparts, and the size and shape of the male’s cheekpads maybe somewhat different.

*Latest as yet unpublished data

The answer probably lies in the distinct evolutionary histories of humans and orangutans. According to the “out of Africa” hypothesis, ancestors of modern humans first emerged in Africa [6, 7]. Around 150,000 years ago, modern humans first emigrated from Africa and started spreading around the globe. Since the emigration process often goes hand in hand with combating disease, fighting wars, and struggling to obtain food, emigrant population sizes typically become very small before new subpopulations can be established. The individuals who eventually settled on other continents brought with them a much-reduced pool of genetic material to pass on to their offspring. In evolutionary biology, this is known as a population bottleneck. The size of a population shrinks, resulting in less genetic diversity. The result of this bottleneck is still evident today in our DNA. Africans are much more genetically diverse than people of European or Asian descent [8].

The evolutionary history of orangutans is complex and has been shaped by different factors such as changing geology, population movements, and more recently, human intervention. The greater genetic diversity of Sumatran orangutans is most likely the result of the dynamic geology of the volcanic Malay Archipelago over the last two ice ages. While the current Bornean population has been relatively stable and likely descended from ancient ancestors that first populated Southeast Asia, the current orangutan population in northern Sumatra has a more complicated and fascinating history. The orangutans that inhabited the area initially were likely all wiped out when the Toba volcano exploded approximately 74,000 years ago. During the following ice age, sea levels fell, and northern Sumatra was re-colonized by orangutans migrating across land bridges from Borneo, mainland Asia, southern Sumatra, and Java. Land bridges appear during ice ages when water becomes locked up in expanding glaciers and sea levels drop as a result. The coastal areas of modern Indonesia are very shallow, leading to the formation of extensive land bridges between its many islands when sea levels are low. When the glaciers melt, sea levels rise and the islands become isolated again. The orangutan populations on mainland Asia, Java and southern Sumatra later became extinct, but the current northern Sumatran population provides a living genetic record of all of these ancient subpopulations. 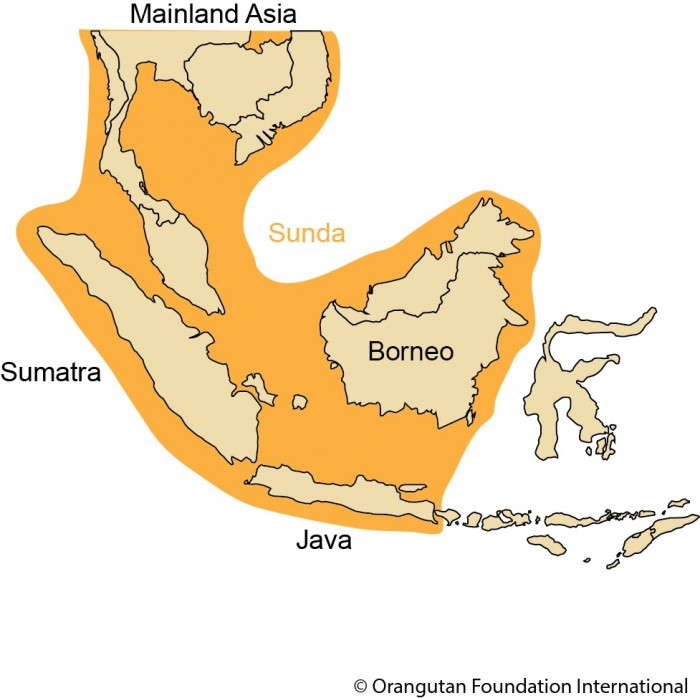 Figure: sunda_map
During the last ice age, Sumatra, Java and Borneo were connected through land bridges with each other and the Asian mainland. The connected land mass known as Sundaland is indicated in orange. 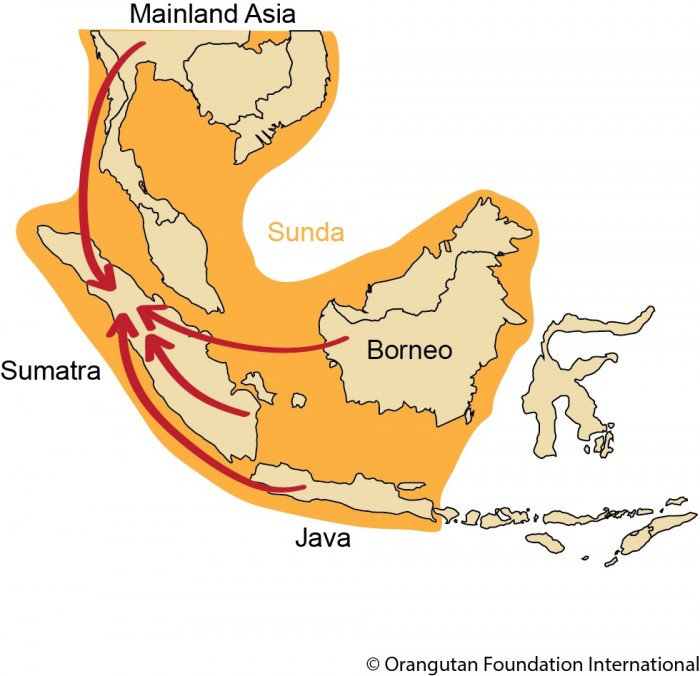 Figure: sunda_map_migration
The land bridges between Sumatra, Java, Borneo and mainland Asia allowed orangutans from these areas to re-claim habitat in Northern Sumatra after the explosion of Toba volcano eliminated the original population. When sea levels rose after the last ice age, the islands and the mainland became isolated from each other again. The orangutan populations on Java and the mainland later became extinct. Today, orangutans are only found on Sumatra and Borneo.

The great genetic diversity in the orangutan genome might compel someone to suggest that orangutans are exceptionally well prepared to adjust to changes in their environment. We know that evolutionary pressure leads to the selection of advantageous mutations in the DNA, allowing organisms to gradually adapt to changing environments and to develop into new species over time. Thus, having a greater genetic diversity for evolution to ‘choose from’ could be beneficial. But is this also true for orangutans in their rapidly changing environment today? Unfortunately, the remaining orangutan habitat in Sumatra and Borneo is not only changing at an alarming pace, but disappearing quickly, leaving orangutans neither the time nor the space to adapt. The Leuser ecosystem in Sumatra, home to the densest and most genetically diverse orangutan population in the wild, is under threat of being converted into yet another palm oil plantation [9]. Despite the fact that the Leuser ecosystem was identified as one of the “world’s most irreplaceable protected areas” due to its exceptional biodiversity [10], its future is far from certain. Conversion of primary rainforest into palm oil monocultures deprives orangutans and other forest dwelling animals of the trees and fruit they need for survival. They have no choice but to starve to death or, since they are often seen as pests, be killed by plantation workers. Eventually, rainforest destruction affects not only animals and plants but also humans who rely on balanced ecosystems for clean water, fresh air and food.

In Borneo, the situation is not much different, with precious habitat lost every day. Orangutans, sun bears, elephants and rhinos, who all once freely roamed the vast forests covering the third largest island in the world, are now restricted to the few remaining patches of rainforest. Orangutan Foundation International (OFI) is working hard to protect as much habitat as possible, but it is a race against time and against big international palm oil conglomerates. Whether orangutans will be able to take advantage of their great genetic diversity does not depend on them, but on whether or not we decide to give them a chance to do so. For us, it’s a matter of paying a little bit more for responsibly sourced or entirely palm oil-free products at the supermarket. For them, it’s a matter of life and death. As one of the seven billion people on this planet, I am ashamed of what we are doing to one of our closest living relatives. As a scientist, I am saddened by the rapid loss of many of the world’s most biodiverse areas. These areas hold many secrets. We are depriving ourselves of the exciting discoveries, whether scientific, medicinal, or biological, that could be made in these biologically rich areas. We can’t reverse what we have done in the past, but it’s about time to start working towards a sustainable future that gives all species on this planet room to live – not only for their own sake, but also for the benefit of the 11 billion people who are predicted to live on planet earth by the end of this century.

Note: Dr Susanne Kassube served as a long-term volunteer during 2013 at OFI’s Care Center and Quarantine in Borneo. She is a PhD physicist.