Wild orangutan populations in both Malaysian and Indonesian Borneo (Kalimantan) are in crisis and are considered highly endangered. Throughout the entire island of Borneo orangutan habitats are diminishing or vanishing.

Ironically, the main localities where massive habitat destruction is not yet pervasive are the tropical rain forests of the rugged, mountainous interior of Borneo. These magnificent forests tend to have lower population densities of orangutans than the peat swamp forests of Borneo’s coastal regions. It is here in these coastal regions where habitat damage and forest destruction are most intense. It is here that local extinction of orangutan populations has been the most pronounced.

Palm oil plantations are a primary, but not the only, cause of the massive deforestation currently occurring in Borneo. The establishment of rubber plantations and small land holder gardens of various sorts, housing complexes, strip mining, road building, legal and illegal logging, and the conversion of forests for various other purposes all contribute to massive deforestation and forest fragmentation.

Orangutans are the largest arboreal creatures on the planet. They spend over 95% of their time in forest canopy and find virtually all their food in the trees, vines, fungi, and insects of the various levels of the forest. Although male orangutans can travel long distances on the ground, orangutans are almost totally dependent on forest for food.

Once the forest is gone, orangutans begin to starve. They begin scavenging for food wherever they can. There are stories of wild orangutans foraging in village garbage dumps. In desperation, hungry orangutans wander to the edges of towns and enter fruiting trees in people’s yards. (We have rescued at least two wild orangutans in this situation). We once rescued a flanged adult male orangutan who was walking down the street in the thriving town of Pangkalan Bun!

OFI responds immediately to calls relating to wild orangutans in dangerous or unusual situations. We receive these calls anywhere from 5 to 10 times per year.
We know that if we don’t answer these calls immediately, then there is a good chance the orangutan will eventually die of starvation if chased off, or be killed.
We need to move the orangutan to a safe, secure forest where there is seasonal abundance of food, preferably to a protected primary rain forest with few people.

The translocation of a wild orangutan is a complex undertaking and requires a specialist Orangutan Rescue Team led by the Orangutan Care Center and Quarantine (OCCQ) manager Pak Tumin backed up by one of the three veterinarians who work at the OCCQ. Most of the following photographs in this article have been taken by Pak Tumin with his small, digital pocket camera during rescue operations over the past few years. Since it is often difficult to obtain photos during rescue operations, I have combined photos from two rescue – translocations to illustrate the process as much as possible. 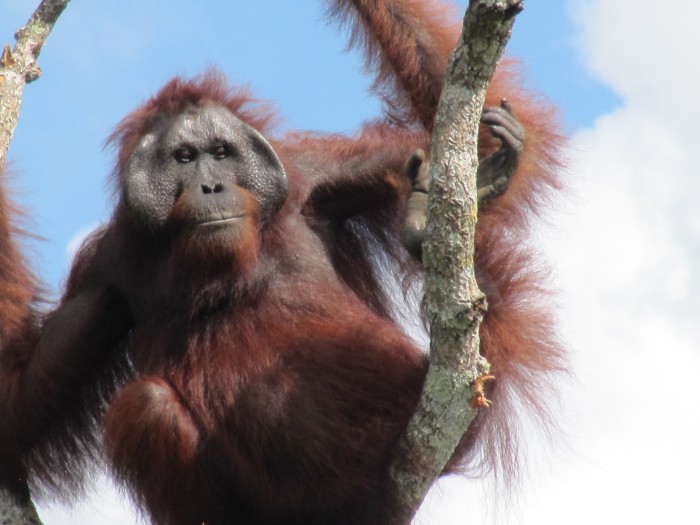 Bornean orangutans live in a feast or famine environment, eating ripe fruit when available and subsisting primarily on bark, vines, and young leaves when there are few fruits in the forest. When the forest is gone, orangutans are often in deep trouble.

The flanged adult male in Photo 1 is not doing too badly. His ribs are not visible and he has a fine coat of red hair which is just beginning to look a bit shaggy. However, he has started foraging in people’s gardens and is eating the inner hearts of young oil palms which means he is regarded as an agricultural pest by palm oil workers. Orangutans are frequently killed in this situation. It is also difficult for orangutans to subsist and survive on this kind of diet. 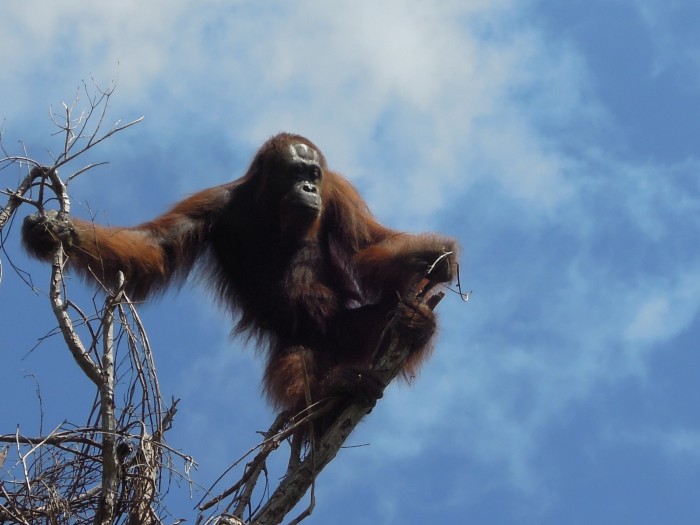 Photo 2 represents another wild orangutan, a subadult male, in need of rescue and translocation. As palm oil plantations decimate the forests of Borneo, wild orangutans have “nowhere to run, nowhere to hide.”

With palm oil plantations demolishing the virgin rainforests of Borneo, wild orangutans find they have nowhere to go. This sub adult male orangutan is perched in the top branches of a tree devoid of leaves or life. There are no other trees surrounding him and it is a stark and bleak contrast to the canopy of the lush forest where wild orangutans normally live.

The location of wild orangutan rescues is never predictable. Sometimes the OFI rescue team needs to travel deep into swamp or into difficult, degraded shrub habitat in order to locate the wild orangutan in need of rescue. Rescues often happen on fringes of forest fragments where the remaining rainforest stops and cleared land begins.

However, most rescues occur in palm oil plantations where orangutans are desperately searching for food. The most difficult part of a rescue operation often consists of simply locating the wild orangutan. Orangutans may quickly flee when they are first sighted by plantation workers or local people, long before the Rescue Team arrives.

Upon arriving at the rescue location, the rescue team first has to dart and sedate the wild orangutan in order to relocate him or her. One of OFI’s Rescue Team members, a traditional Dayak blow pipe expert, has to get within range of the wild orangutan in order to safely dart him or her. Photo 3 depicts one such expert, Pak Ateng. Depending on the size of the orangutan, Pak Ateng sometimes has to dart the orangutan multiple times to ensure that there is enough sedative to keep the rescue staff and orangutan safe during medical checks and the relocation process. But it is also crucial not to overdose the orangutan. 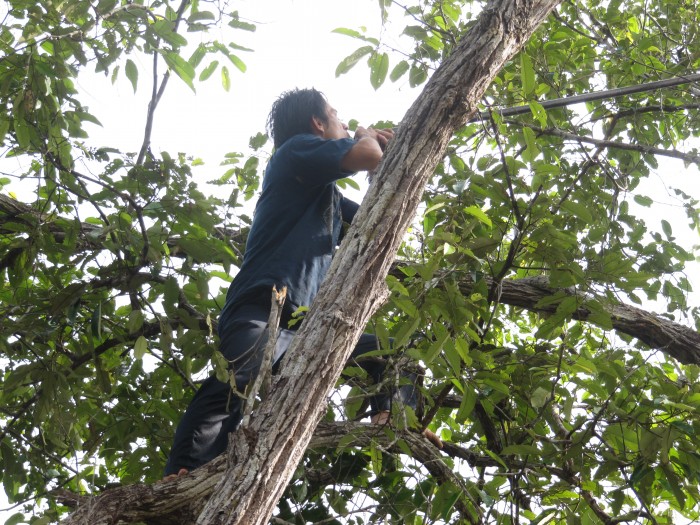 The Dayak people are expert tree climbers and have a seemingly innate ability to move through the forest. The blow dart is a part of their traditional Dayak culture. Pak Ateng remarked, “When I was seven years old I began to learn about blow darting with my father. I would follow and watch my father using his blow pipe in the forest, hunting for pigeons, parrots, hornbills and woodpeckers not only for food but also for traditional medicine and rituals.”

With an ability to climb trees with ease and skillfully using blow pipes with amazing accuracy OFI Dayak Rescue Team members are able to make the most of near impossible rescue situations. Even when the orangutan in need of rescue is positioned high up in the forest canopy, Pak Ateng is able to climb a tree and safely dart the orangutan. 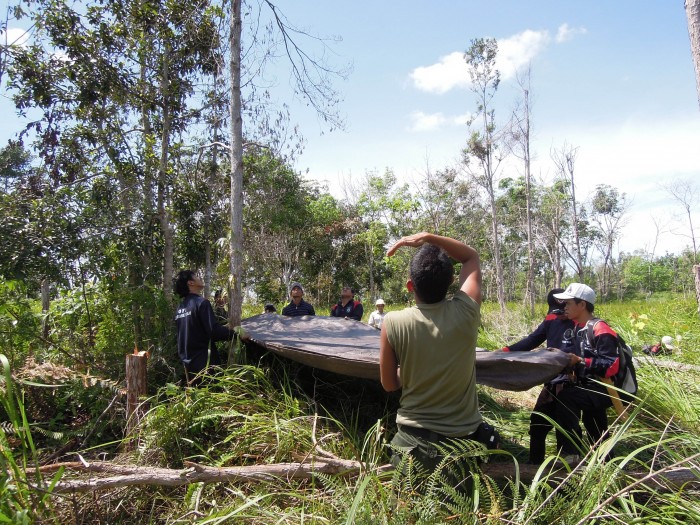 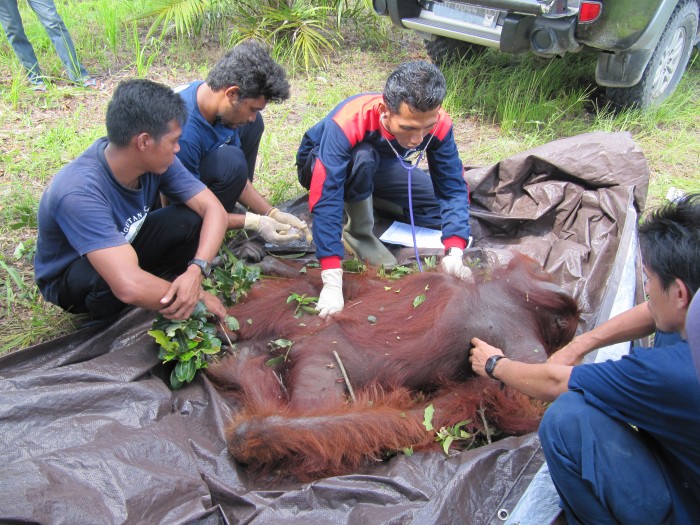 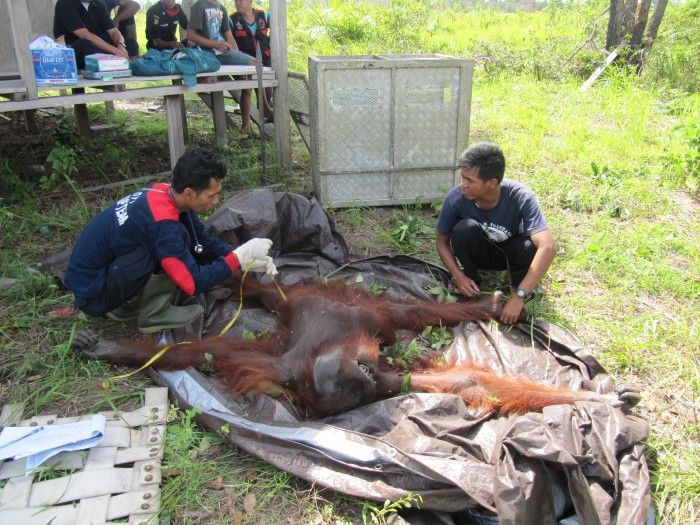 During these medical checks the vet measures and weighs the orangutan as well as takes hair and blood samples. These are medical procedures similar to what orangutans undergo upon first arrival at the Care Center and Quarantine. Similar procedures are in place when orangutans are on their way to be re-released into the forest. Here Dr.Prima takes the male orangutan’s measurements with assistance from a member of the Rescue Team. 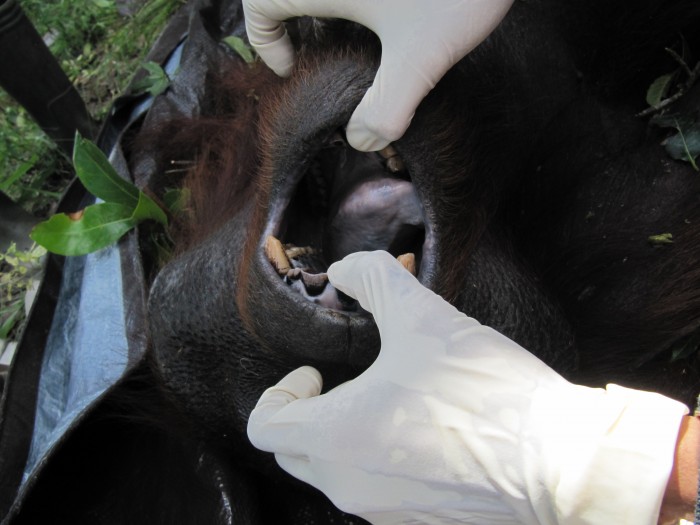 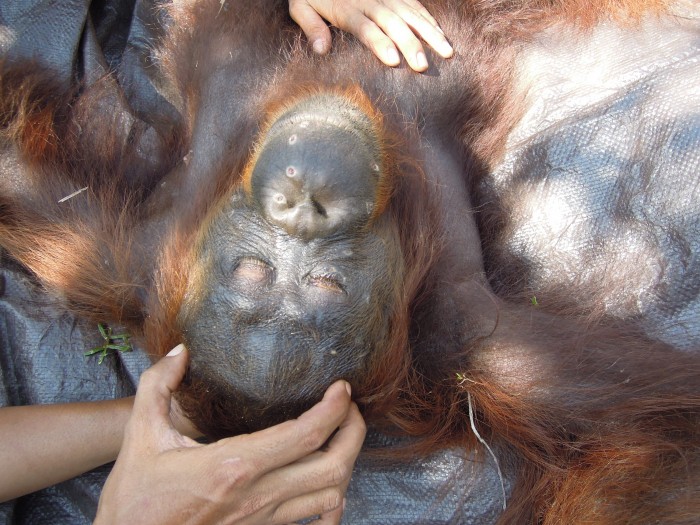 Sometimes rescued orangutans have wounds resulting from attacks by people. A wild orangutan foraging for food in unlikely places, like someone’s garden or yard, can be perceived as threatening. Sometimes local people react aggressively and will try to get rid of orangutans by shooting them with air guns or home made shotguns. This rescued orangutan had been shot with rubber pellets which hit his face. Thankfully, due to OFIs presence in the region more and more people call the Care Center for help rather than attack orangutans directly. During the most recent translocation and rescue operation, the owner of a small palm oil plantation contacted Pak Tumin and then kept watch on the orangutan’s location without frightening him. The next morning a Rescue Team scout was sent to check and confirm the orangutan’s presence. After the orangutan’s location was confirmed, the Rescue Team immediately went out into the field. 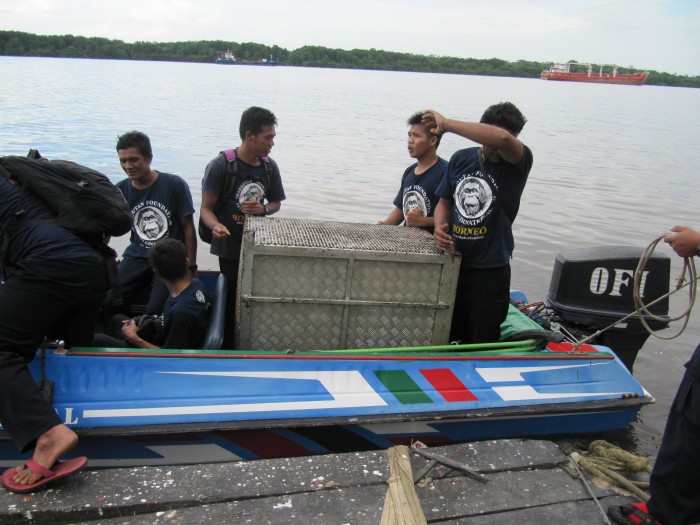 Once the medical checks have been completed, the still sedated orangutan is placed into a transport cage in order to safely translocate him or her to the safe location. The slowly awakening orangutan is closely monitored while in the transport cage.

In order to reach the relocation site where the rescued wild orangutan will be released, the Rescue Team often needs to travel by boat. 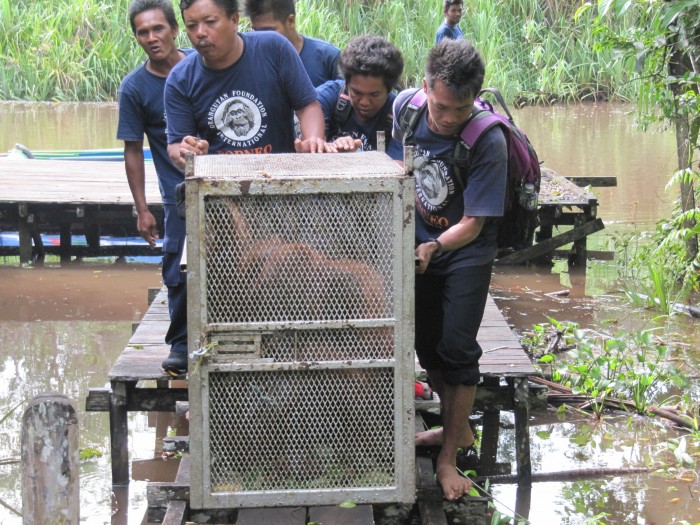 OFI’s Rescue Team consists of many staff members from the OFI Care Center who attend rescues on a rotating basis. Most of the Team members are Dayaks or local Melayu, native to the island of Borneo. These staff members have all spent many years with the organization and have worked both at field sites and at the Care Center.

Here in Photo 10, Team members cautiously move the transport cage along a narrow bridge after lifting the cage from the boat. 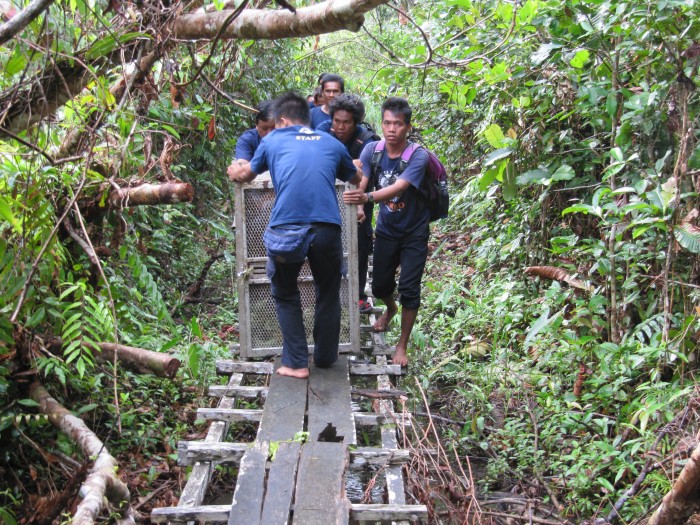 The Team gingerly moves the transport cage into the forest. The cage is of steel and remarkably heavy. Moving it involves demanding physical labor. By this time the rescued orangutan has awoken from the sedative and is eager to return to the forest. 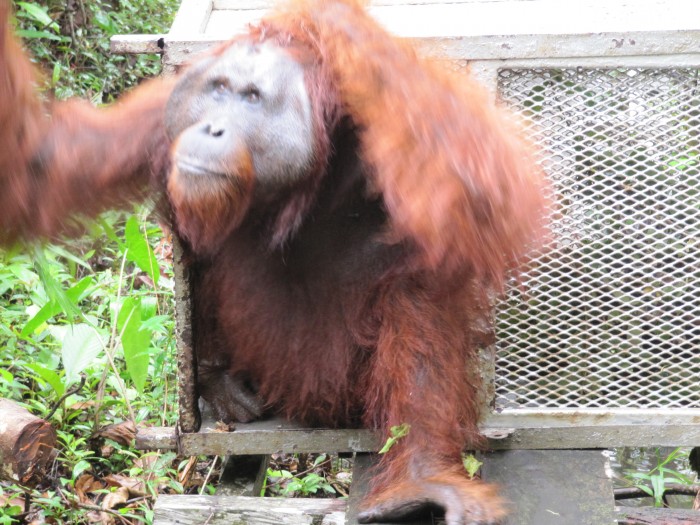 Once the transport cage has been opened, there is no telling what the wild orangutan will do. On the rare occasion, an orangutan has left the cage, sat down on the ground, and looked at his rescuers for a while as if contemplating them before finally moving up into the canopy. This doesn’t happen very often! Usually the rescued orangutans bolt out of the cage and climb into the canopy as if being chased.

So it was with this rescue. The adult male quickly moved out of the transport cage without so much as a glance at the Rescue Team and climbed into the lush canopy. He didn’t even wave good-bye. 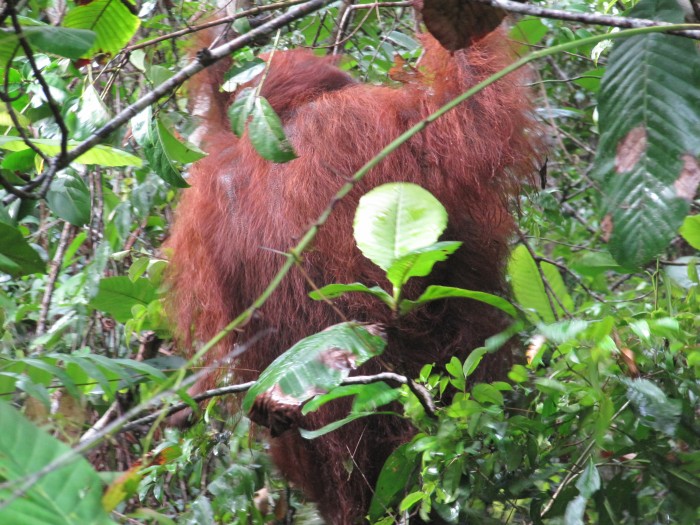 The happiest of sights: a wild orangutan safely translocated and released back into the forest where he belongs. Notice his back is turned. He wants nothing more to do with those pesky humans. We can’t blame him. He is one of the lucky ones. He survived his close encounter with humans.

The reader may notice that the orangutans mentioned in this article are males. In the wild subadult and adult male orangutans wander long distances looking for receptive females and food, and avoiding areas with dominant males. Females set up their own home ranges close to and/or overlapping their mother’s home range. Males roam. Females stay. Although both males and females need to be rescued from palm oil plantations, male orangutans are the ones whom we find needing rescue in odd or out-of-the-way locations. If you see an orangutan walking down the street, it’s likely to be a male. The female rescued from a palm oil plantation was probably born there before the forest at that location was converted to industrial agriculture. The male, more likely, wandered in.

Rescuing wild orangutans is only a small part of OFI’s activities and mission in Borneo but it is very satisfying. We hope it is equally satisfying for the rescued orangutans as well.

Please consider a donation to the OCCQ to help fund programs like this
Donate Now!