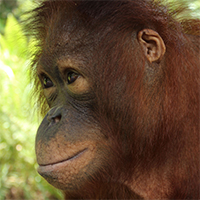 There are currently over 300 orangutans at the OFI Care Center, and no two are the same. It’s never easy selecting one “Orangutan of the Month” but at certain times one individual will stand out. For her great courage and resilience, Jalin has earned the spotlight this month. 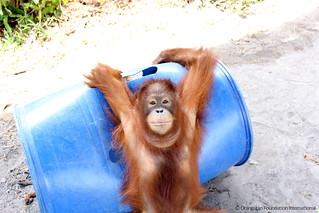 Jalin arrived at Orangutan Foundation International’s (OFI) Orangutan Care Center and Quarantine (OCCQ) when she was just about one year old. A palm oil plantation worker brought her in, claiming to have found her on her own while workers were clearing rainforest to be converted into a palm oil plantation. During her medical examination, the OFI veterinarians noticed her severely bruised hand and two pellets in her body, one of which was behind her ear. These wounds are clear signs that she had been shot at, along with her mother, whom she was likely gripping tightly at the time. Her mother was most likely killed, but fortunately Jalin managed to escape the fate of becoming an illegal pet by being brought to OCCQ.

Since her arrival at the Care Center, Jalin has thrived. She quickly adapted to her new environment and peers, joining the others in play on her very first day. She eventually graduated forest ‘kindergarten’ and joined the juveniles at Pondok Cempedak. While the smallest of this new group, she has a big personality.

Jalin’s calm nature stands out as the orangutans prepare to leave their sleeping enclosures for daily forest school. While her peers jump and squeak excitedly around her, Jalin seems to be the eye of the storm. As the group reaches the playground, some of her peers begin playing with each other, but Jalin has a heart for climbing. She makes her way up to the hanging ropes and starts swinging. She also enjoys playing with the big blue barrels or practicing her nest building skills on the wooden platforms. After exploring the playground, it’s time for some real climbing in the forest canopy. 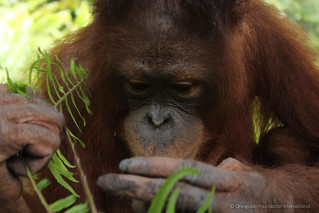 When the orangutans first venture into the Learning Forest, they often begin wrestling with each other out of excitement, and sometimes the activity can become rough. When some of her larger peers grabbed Jalin’s legs trying to pull her down from climbing her first tree of the day, she fell to the forest floor and was about to be wrestled when she pulled a complicated roll to free herself from their grip. She quickly but gracefully made her way up the tree and looked down with a satisfied expression.

After climbing her favorite tree, it isn’t long before Jalin finds her favorite forest object, a long vine that she uses as a swing. Hanging upside down on one leg from the vine, she shows her playful side. Swinging back and forth with enthusiasm and agility, this juvenile expresses her youthfulness. She is having so much fun that she has attracted the attention of her friend Meli who comes to join her. The pair eventually leave the forest swing to venture deeper into the bushes where they begin to collect branches to build a nest. Jalin carefully watches the slightly older Meli, and copies her skills of breaking branches of a certain thickness and length. In the wild, orangutans would learn these skills from their mothers, whom they stay close to until they are about eight to nine years of age. At the OFI Care Center, orangutans mainly learn from one another.

After some time of learning nest skills, Jalin spots a puddle of water nearby. Both girls climb down for further inspection, picking up some branches from the bottom of the water. Letting the water drip from the sticks into their mouths, they enjoy a refreshing drink after all their hard work in forest school! Their playful interaction with the water is so similar to a young human’s, everything from the way they use their arms, to their reactions while teasing each other splashing water.

During their playful moment at the puddle, a call in the distance comes from an OFI caregiver. Forest school is coming to an end for the day, and it is time to return to the playground. Jalin plays with her friend for 15 more minutes before making her way back into the trees to travel back. By this time, Jalin has exhausted most of her energy and is happy to climb down onto the back of her caregiver Ibu Eteng for a ride back to her sleeping enclosure.

Jalin’s success at the Care Center is remarkable given the tragedy she faced as a young orangutan. OFI will continue to support this brave young orangutan until she is ready to be released into the great forest ready to thrive in the wild.

A Second Chance at a Wild Life