Bear of the Month: Desi
Please read our Covid-19 status and policy update

By Philip Stubley | In Bear of the Month, Stories | 3 Comments 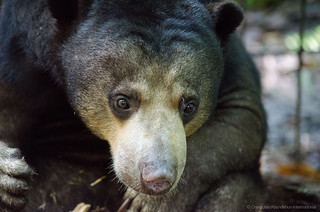 Coming to the beginning of a new year allows time for reflection. This monthly update is something slightly different, reflecting the diverse range of animals that Orangutan Foundation International (OFI) has rescued or received over the last few years.

Bornean rainforests are home to many other species of large mammals beside orangutans: species that face the same threats as orangutans do, including deforestation and the illegal pet trade. In addition, one of these species, sun bears are particularly vulnerable as poachers hunt sun bears in order to sell their bile for its supposed medicinal purposes. Sun bear bile fetches a “pretty penny” not only in China but also in Indonesia.

In the future we will occasionally feature wildlife other than orangutans as our animals of the month. In this first “Bear of the Month” it seems appropriate to start with Desi, a female adult sun bear living at the Orangutan Care Center and Quarantine (OCCQ).

Desi was the first Malayan sun bear that Dr. Biruté Mary Galdikas rescued and the first bear to arrive at OFI’s Care Center in Central Kalimantan (Indonesian Borneo). Dr. Galdikas rescued Desi, a small female adult bear, in 2008 but it had taken her several years to reach that point. Some years earlier a senior staff member had taken Dr. Galdikas to the local zoo where she was horrified at the conditions under which Desi was kept and vowed to rescue her. But it didn’t come easy. This is a story that only Dr. Galdikas can tell and much of the information in this article comes from her. 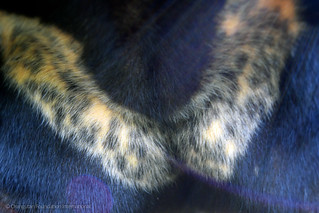 Desi has a light golden muzzle and sports the crescent shaped patch associated with sun bears. Each sun bear patch is unique and Desi’s patch brings to mind leopard print. Her black coat has a few areas where her hair is missing, most likely due to age and quarrels with the other bears. Desi’s expressive eyes tell the story of the stress she was put through during the first part of her life. It has been a long life; her exact age is unknown but estimates put her at around twenty at the very least. She seemed old when she first came in 2008 so she could easily be 25 years of age or more.

Previously Desi was a long term resident at the old Pangkalan Bun Zoo, located on the other side of town. She was kept in a concrete pit into which food was unceremoniously tossed. Dr. Galdikas was persuaded to visit, although she had no particular love for zoos, and encountered Desi, half covered in mange. The owner wanted to keep Desi although he showed no particular interest in her as an individual animal in his private zoo.

Dr. Galdikas vowed to rescue Desi but other issues beckoned. It wasn’t until 2007 that Dr. Galdikas entered into negotiations to buy the entire zoo which the owner now wanted to sell. Dr. Galdikas went back to North America and raised the forty thousand US dollars that was the negotiated price for the zoo. She knew many animal activists wanted to close down zoos. Her first appeal was to PETA (People for the Ethical Treatment of Animals) which was not a grant-making organization. PETA raised six thousand dollars. Celebrity actor Goran Visnjic, who once played Dr. Luka on the popular TV series “ER”, and his wife Ivana contributed more. 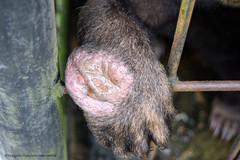 Upon arrival Desi’s front right paw was examined. It was badly broken and all the claws were missing. Sun bears claws are very long and curved, to allow for climbing and tearing into logs. Desi still utilises her good paw to do both of these. As for her right paw, Desi now walks on her wrist where the skin has formed a pad. She still manages to walk around, a little slower than other bears, but this doesn’t hold her back.

Being the first bear to be housed at the OFI presented the staff with a variety of new challenges. Her care was different to the orangutans, and the OFI staff and volunteers worked hard to ensure her needs were met. To this end new enclosures were designed and built.

Desi was understandably shaken and wary to begin with. Once she was introduced into her new environment and enrichment such as rotten logs provided, she started to express instinctive bear behaviours. It took some years but Desi’s mood and behavior improved and she mellowed towards her caregivers showing them a gentle affection. Soon enough, more sun bears started to arrive at the OFI and Desi finally had some bear company. An adult female, Hilda, arrived in 2012 (another interesting story for Dr. Galdikas to tell) and the two bears accepted each other very quickly. Desi has been with Hilda for some years now and the pair regularly play together. Desi can be very selective about who she accepts so once she has welcomed you in, it’s for life.

As of 2017 Desi is housed in an enclosure with Hilda and a huge male bear, Raja. They share a communal space and also an enclosed one-hectare forest where they are able to roam freely. (We thank colleague and bear volunteer Patrick Rouxel for helping mastermind the building of this forest enclosure). Desi spends most of her time in the forest enclosure among the trees. She is making up for lost time, enjoying foraging around the lush greenery she was denied for so long. She will normally find a nice shaded area to make a nest and rest there. On hot days she will come back from the forest and take a soak “in the tub”, curling herself up snugly to cool off. 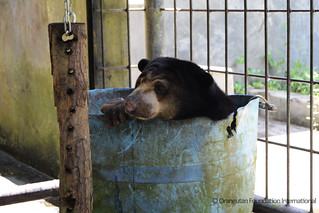 The sun bears are also known as “honey bears” and Desi lives up to this name. Bears have an excellent sense of smell. As soon as Desi catches a whiff of honey in the vicinity, she shall be there as quickly as possible.She also has a taste for bananas and jackfruit.

Desi is the dominant presence in her enclosure, surprising to any onlooker from her small size and somewhat aged appearance. Being brought up in harsh captive conditions, she has learnt to look after herself. At meal times she always ensures that she is in front of the queue and will put Raja in his place. With bears it is not always down to size; it is attitude and seniority that count. Despite being the oldest bear in the OFI she seems to grow younger every day, a result no doubt of a much more natural location than she ever had before in captivity.

Desi is a testament to OFI’s continuing efforts to care for all animals who need help. No animal is ever turned away. Desi is unfortunately unable to be released back into the wild but she finally has the chance to live a comfortable and happy life.