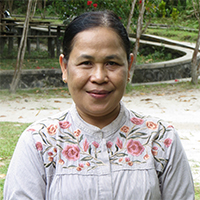 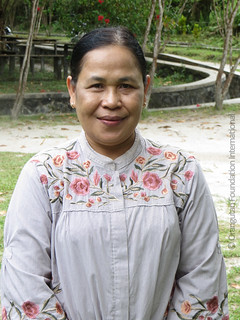 “Oh, please come in and have a seat,” she says in perfectly spoken English. “It’s a hot day, isn’t it? Would you like some water? I’ll be just a minute. I am trying to make a quick phone call to Camp Leakey but sometimes it’s not possible.” This busy Senior Administrator is approachable and available to everyone. While at work, there are several knocks on the door and heads pop in.

Born and raised in a small city in Central Java, Ibu Waliyati might not have imagined that she would one day be living in the jungle and working as the Senior Administrator for a wildlife organization. At a young age, she showed an eagerness for learning. After completing high school, she moved to Jakarta to study Office Administration as well as spoken and written professional English. She took on her first job as an office secretary for a small consulting agency working on a nuclear power plant. While she learned a lot from this position, she was ready for a new adventure after finishing college, and that adventure certainly came!

Just after graduation, Ibu Waliyati found a job advertisement in a national newspaper looking for a secretary with English reading and writing skills to work in Kalimantan, Borneo. The ad stated that the candidate would be working at a hotel in the town of Pangkalan Bun. As it happened, the hotel owner, a local lady, did not hire Ibu Waliyati. However, she was impressed by Ibu Waliyati’s application letter. The hotel owner thought that her good friend, Dr. Galdikas, might be interested in this exceptional applicant. The local lady handed Ibu Waliyati’s application letter to Dr. Galdikas who then wrote a letter to Ibu Waliyati offering her a job.

Feeling adventurous, Ibu Waliyati replied. Communication at this time was still by post or telegram, and because Dr. Galdikas was often in the middle of the jungle, Ibu Waliyati addressed her letter to Dr. Galdikas in care of the lady who owned the hotel in Pangkalan Bun. While the hotel was the most reliable post-address, it was still hours away from Camp Leakey, and the interviewing and hiring process, all by post, was slow. At the time there were no phones in the area. For Ibu Waliyati, the process took over six months, but her patience and persistence eventually landed her the job. 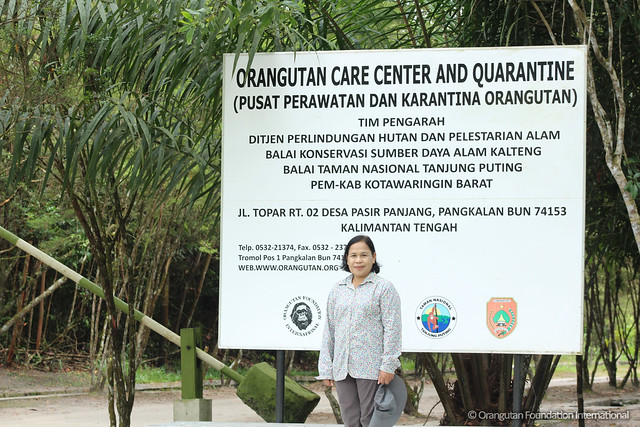 A few months following the final interview, Ibu Waliyati boarded a small 12-passanger plane that would take her to the tiny airport of Pangkalan Bun in Indonesian Borneo. Dr. Galdikas picked her up at the airport near the village of Pasir Panjang where they began their trip together, over land and water, to Camp Leakey. Ibu Waliyati recalls her journey by boat, amazed at her new surroundings: “It was such a different world. I came from the big city of Jakarta, and all of a sudden I was in the middle of the rainforest. It is not like nowadays where you can watch TV or ‘google’ what another place in the world looks like. So, I just let it all happen. It was definitely a great adventure!”

I came from the big city of Jakarta, and all of a sudden I was in the middle of the rainforest. It is not like nowadays where you can watch TV or ‘google’ what another place in the world looks like.”

When she arrived at Camp Leakey she soon encountered her first orangutan, named Supinah. Ibu Waliyati laughs and says “Actually I met Supinah when I was introducing myself to the kitchen staff of the camp. When Supinah approached me from behind, they warned me saying ‘Watch out, Supinah doesn’t like cooks and can attack!’ Then Supinah walked up to me; I didn’t know what was going to happen. Supinah sniffed me and looked at my face, but she must have known that I was not a cook” she laughs “because then she just turned around and started to climb into the trees.”

After her first encounter with an orangutan and meeting the staff at Camp Leakey, Ibu Waliyati started to help Dr. Galdikas with administrative tasks and logistics planning. Camp Leakey was mainly a research site back then, but already open to the public as well, though the number of visitors was much less than it is today. Her first weeks at the camp were both amazing and overwhelming. She stayed in a small wooden house in the middle of the jungle where all the sounds, smells and sensations were brand new to her. These things eventually became familiar to Ibu Waliyati, and she worked with great passion and dedication in Camp Leakey for the next 2 years.

Ibu Waliyati’s career would soon be impacted by the rise of the palm oil industry. It first began to boom in Borneo in the 1990s, and the first orangutan victims of the industry were rescued by OFI, and rehabilitated at Camp Leakey. With the number of injured and orphaned orangutans increasing every day and now at a total of 35, OFI began building the Orangutan Care Center and Quarantine (OCCQ) in 1997 near the village of Pasir Panjang. In 1998, when the Care Center opened its doors, the number of orangutans in OFI’s care had already risen to 100 individuals, mainly due to large forest fires which swept through Kalimantan at the time.

While the OCCQ was being built, Ibu Waliyati continued to work at Camp Leakey on administrative tasks as well as caring for the orangutans who were in desperate need of loving care. She has special memories of orphaned orangutan Thomas, whom she took care of for many months. “It was so special and sad at the same time to take care of such a tiny, innocent creature who is so human-like. I needed to feed Thomas every few hours because he was still so young. I built up a very special relationship with him. Luckily he made it and is now living in the wild. Sometimes I think about him and wonder how he is doing. I will never forget him.”

Around this time, Ibu Waliyati’s ‘adventure’ had transformed into her life’s mission. “I remember feeling so touched by what was happening to the natural habitat of these amazing animals I had worked for and with over the past years. I knew this was something that I could never just give up.” When the OCCQ was finished, Ibu Waliyati did not hesitate to relocate to Pasir Panjang to fulfil the role of Care Center Administrator. Twenty eight years later, she continues to work for OFI, now as Senior Administrator and with almost 3 decades of experience, overseeing over 220 employees, and caring for over 320 orangutans.

Ibu Waliyati has grown with OFI, as she says in her own words, from an inexperienced 24-year-old into the confident Senior Administrator she is today. Her favorite part of working for OFI are the releases. “It never gets boring to see an animal who we have taken care of for years and years to be given a second chance in the wild. That is what it is all about, the reward of our work.” She also finds enjoyment in OFI’s commitment to and pursuit of land and forest acquisition. “It might not be as exciting as releasing an orangutan but without new release sites, there will be no space to release the orangutans. So, whenever a new release site is found, I am so happy. These moments give you the hope you need to keep on working with a species that is threatened so badly.”

It never gets boring to see an animal who we have taken care of for years and years to be given a second chance in the wild.”

Ibu Waliyati’s search for ‘adventure’ transformed into a career and life’s mission. Apart from missing good bookshops like the ones in the city, she has no regrets in accepting a job with OFI in the forests of Kalimantan. “It is the best decision I could have made and I wouldn’t have wanted to miss this for anything in the world.”

The Joy of Scent