Today I am making a special, deeply urgent, and very personal appeal to you.

Many of you are long-time supporters of Orangutan Foundation International (OFI) and you already know my story. In 1971, I traveled to Borneo and established Camp Leakey in what is now Tanjung Puting National Park and began my lifelong field study of orangutans. Immediately, I felt compelled not only to study but also to save these beautiful, solitary, and gentle beings. I understood that saving them meant saving their habitat.

Tanjung Puting was a game reserve in those days and logging was common. One of my first victories in protecting this wonder of biodiversity came with a condition: as long as I remained in Tanjung Puting and continued my work with orangutans there, government officials would make every effort to halt the logging. As I wrote in my book, “Reflections of Eden,” I accepted this condition because I understood that every forest needs a guardian.

I stayed in Tanjung Puting and continued to work with Indonesian authorities, partners, students, and friends, to protect it and in 1982 it was designated as a National Park. But deforestation in Borneo has been relentless. By one estimate, only 37% of the forests of Borneo were still intact by 2010. The fires of 2015, considered by many to be one of the worst environmental disasters in history, caused almost incomprehensible damage and made Indonesia one of the biggest carbon emitters in the world. Then in 2016, the status of Borneo’s orangutans was raised to critically endangered.

The deadly seriousness of the challenge makes our victories that much more important. With your support, OFI has rescued and released almost 600 wild born ex-captive orangutans back into the wild. In addition to safeguarding the million acres of Tanjung Puting, OFI worked with Infinite Earth to establish the Rimba Raya Biodiversity Reserve, protecting an additional 160,000 acres. Your donations have also helped OFI establish the Orangutan Legacy Forest and purchase and protect another 17,000 acres of tropical rain forest. With your support, we fought the fires and it was with your support, too, that we built a nursery, where we saved and nurtured 35,000 precious seedlings from about 20 different, important tree species and began the slow process of turning barren ashy ground into forest again.

I have seen many things in my years in Borneo. The bulldozers, fires, and poachers have taken their toll on “Eden.” I have seen ancient trees felled in an instant for a passing profit. I have heard the unceasing whine of chainsaws in the near distance. I have seen starving orangutans looking for food beaten to death for approaching villages. I have heard the music of the forest fade as rare songbirds are captured, caged, and sold. But that song has not been totally stilled. With your help, it never will be.

The future of the orangutans, the forest, humanity, and the planet that we share are inextricably intertwined. I am asking you to make a special commitment to that future by helping to preserve one of the most unique ecosystems on earth, the tropical rain forests of Borneo. We have a critical need to purchase, protect, and patrol these forests. The urgency is real. When forested land becomes available, it is essential to buy it before the palm oil and timber companies grab and destroy it.

We are in that situation right now. OFI has just been offered two thousand hectares of primeval rain forest in the hills above Tanjung Puting. A Korean company intends to begin operations in this region, clear-cutting timber and turning it into plywood. Once this forest is cleared, the land will be turned into a palm oil plantation. When primal forest is lost, it lost forever. 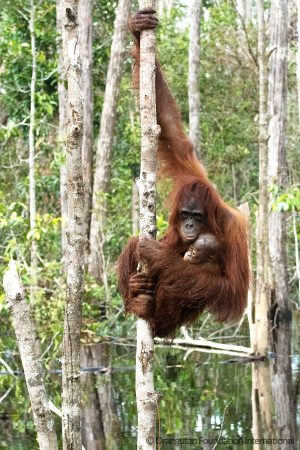 Who are the real guardians of Tanjung Puting and the Orangutan Legacy Forest? You. OFI’s contributors and supporters.

The conservation of orangutans and their Eden, this hauntingly beautiful rainforest wilderness, has been the work of my life. But I cannot and could never have done this work alone.

We need your help now more than ever to save the forest, for the orangutans and other wildlife, in Borneo.