A Biological Treasure and an Important Orangutan Refuge 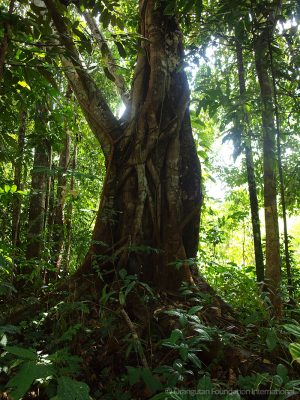 The Orangutan Legacy Forest is a biologically-rich forest area home to more than a hundred orangutans and other endangered wildlife species. Its acquisition and permanent protection is key to ensuring the health and safety of the region’s last remaining wild orangutan population.

OFI started purchasing land to save as much forest as possible, beginning with forest land near the traditional Dayak village of Pasir Panjang. OFI has continually expanded the area by purchasing neighboring tracts of forest as they have come up for sale, particularly in the areas of Semonu and Mentawa.

Piecing Together a Safe and Secure ‘Sanctuary’ 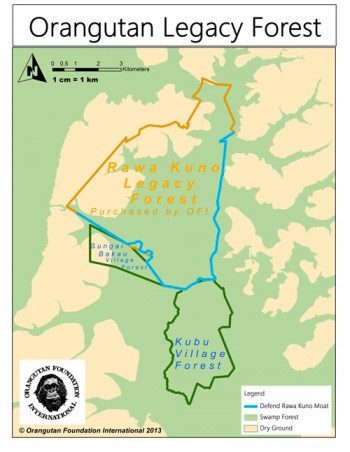 In 2015, OFI purchased or paid advances for over 586 hectares of land (1448 acres). This includes land in the areas of Rawa Kubu, Rawa Kuno, Mentawa, and Semonu (all of which are considered part of the Orangutan Legacy Forest) as well a down-payment on an 895-acre piece of land along the Sekonyer River, against the edge of Tanjung Puting National Park.

More than one hundred displaced wild orangutans have found refuge in the Orangutan Legacy Forest region. Their presence is readily visible within the peat swamp areas where the verdant forest canopy is festooned with orangutan sleeping nests. A biodiversity hotspot, this forest is also home to sun bears, clouded leopards, wild pigs, as well as several species of deer and monkeys. Some of these animals are found nowhere else in the world and are endemic to Borneo.

The region also boasts an amazing array of plant species. A short walk into the forest reveals carnivorous pitcher plants, trees with girths larger than the arm span of three grown men, and a variety of fruiting plants that sustain this diverse ecosystem. On a larger scale, the forest is an important ‘carbon sink,’ a natural carbon offset safely sequestering carbon deep below the swampy waters. 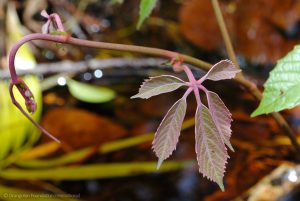 By purchasing the land, OFI takes on the tremendous responsibility of protecting the forest in the immediate and far off future. Illegal logging, mining, and poaching, as well as forest fires during the dry season, threaten the forest and its endangered species inhabitants. OFI invests in patrol teams to guard and monitor the forest. We continue to purchase land that provides ideal locations for patrol posts and water towers to help protect this critical region.

Additional land purchases will go towards developing the Wildlife Forest Corridor by connecting the three pieces of forest owned by the OFI. This corridor will allow wildlife to move safely through the region so that populations are not “trapped” in one area but may follow seasonal food resources as they fruit and flower throughout the three areas. At the very least, this large, interconnected, and protected habitat will buy the orangutans, the forest, and OFI that most precious of commodities: time.

A Future Home for Rehabilitated Orangutans

As Borneo’s rainforests are cleared for palm oil plantations, orangutans are left homeless and vulnerable to starvation, disease, and predation by humans. Orangutan mothers are killed and their infants fall victim to the cruel and illegal pet trade industry. If they are lucky, they eventually find their way to an orangutan rehabilitation facility, such as OFI’s Care Center and Quarantine. 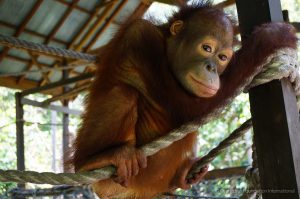 For the 320 orangutans currently being cared for by OFI, the Orangutan Legacy Forest truly is ‘the promised land.’ Each month orphaned orangutans enter OFI’s rehabilitation program. Yet with so little protected forest remaining (and with many national parks off limits to ex-captive animals), it becomes increasingly difficult to find suitable release sites for those ready to return to the wild.

Portions of the Orangutan Legacy Forest damaged by the devastating fires in 2002, 2006, 2012, and 2015 will be reforested through an aggressive, long-term Reforestation Program carried out by OFI staff and volunteers in the years ahead. This will transform existing open swampy grasslands back into lush tropical rainforests capable of supporting an expanded population of orangutans. A vast, wild, and fully reforested ecosystem, the Orangutan Legacy Forest will become home to orphaned and rehabilitated orangutans—giving them a second chance to be wild.

A Unique Conservation Opportunity and a Special Fundraising Challenge

The pace of development in Borneo is accelerating. OFI’s outreach to local land owners who are willing to sell their land for conservation has intensified but prices continue to increase. Land in the critical Mentawa area and in the Wildlife Forest Corridor is becoming especially expensive.

For OFI, the Orangutan Legacy Forest initiative is a race against time in a must-win battle against the powerful forces of wealthy and influential palm oil and timber industry elites. Keenly aware that the vast majority of land sold by local landowners is converted to palm oil plantations or pulp and paper concessions, we have made a firm promise to our many stakeholders that we will not only purchase, but also protect critical orangutan habitat as best we can.

Thanks to you, OFI has been successful in keeping the Orangutan Legacy Forest and surrounding buffer and wildlife corridor land out of the hands of short-sighted developers since 2011. However, our fight to protect the forests of Borneo and our need for your support is far from over. 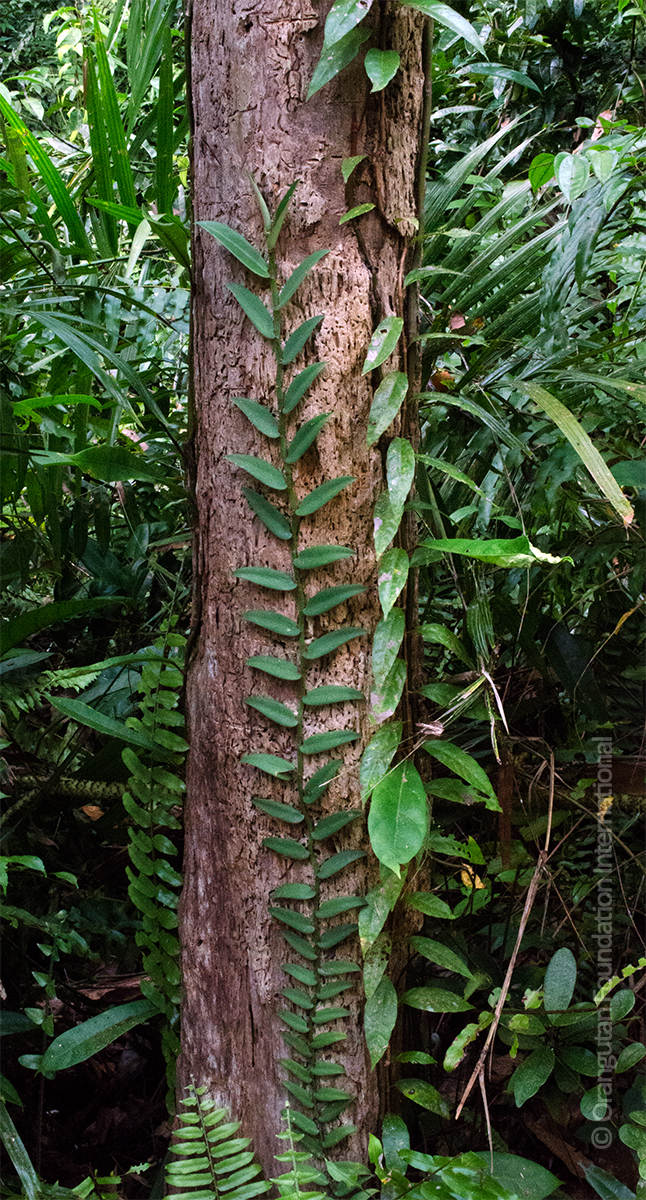 Your generous financial donation will ensure the permanent protection of the Orangutan Legacy Forest and its population of wild orangutans. It will also create a much-needed sanctuary for the release of orphaned and rehabilitated orangutans back into the wild. Let this be your legacy!