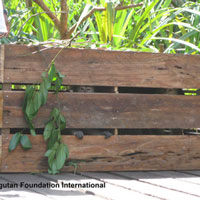 Central Kalimantan, Indonesia – For a place called the Orangutan Care Center and Quarantine (OCC&Q), there is a surprising number of animals around that are neither orange, long-haired, nor gentle. Apart from animals rescued from a zoo OFI bought and closed down, we regularly accept confiscated, surrendered, and injured animals from local people and government. A recent temporary resident of OCC&Q was a feisty Crab-Eating Macaque male, who was later joined by a bigger and more aggressive cousin, a Pig-Tailed Macaque. Both males were kept in enclosures and fed thrice daily, as well as provided with fresh branches and browse, and included in the Environmental Enrichment program intended for orangutans. The macaques showed excellent physical health and behavioral vigour, and left no doubt of their intense desire to be set free.

A decision was made to release the macaques at the Buluh Release Station in Lamandau Wildlife Reserve. On July 10th, 2010 Dr. Biruté Mary Galdikas and OFI assistants travelled to Lamanadau with the two macaques. Wooden transportation cages were constructed and lined with acacia branches. The macaques passed behavioral observation and health checks with flying colors. On the morning of the release, Herman the Crab-Eating Macaque calmly allowed himself to be transferred from his living enclosure to the transportation cage as if he knew the process was for his own good. Willie the Pig-Tailed Macaque made no such concessions to people and acted like a proper member of his species, grabbing, grimacing and baring his teeth at anyone who tried to handle him. He was tranquilized and also put in a transport cage.

The day of the release dawned hot and clear, a nice change from the atypically rainy July this year. The journey to freedom for the releases involved over an hour’s car ride and an hour in a speedboat. The macaques accepted these travels with admirable composure and lack of fuss. Once the release party arrived at the chosen site, fruit was prepared for the animals.  To minimize the stress for the macaques, we switched from our speedboat to a canoe and paddled upriver. At the chosen spot, the transport cage was pulled from the canoe, with some difficulty, to the wooden jetty, almost flooded by the extremely high river. In keeping with OFI release tradition, Dr. Galdikas said a ceremonial prayer for the macaques’ survival in the wild, expressing our shared hopes for their foraging, social and reproductive success. Willie and Herman looked out curiously from between the planks of the cage.

We decided to release Herman first, to give him time to make a break for the jungle before Willie got out. (During their time at the OCC&Q they were fond of rattling their cage bars and grunting at each other. It did not bode well for their friendship in the forest). Everybody who had cameras with them got them out and suspended their fingers over the shutter button. Of course, after Mr. Kusdi opened the cage, Herman showed zero interest in leaving the cage and just sat on the floor of the cage and benignly looked around. Feeling a little anti-climatic, we coaxed him out with bananas – and eventually Herman started walking down the jetty into the forest.

Next, the prayer for Willie was spoken and Dr. Galdikas asked for his cage to be opened. The reaction was quite different  from before. All the assistants shrank back and Mr. Ukim, fierce-looking and very experienced, was volunteered by his colleagues to do the honors. As soon as Willie’s cage door opened, he jumped on top of his cage and grimaced at the assembled group of spectators. Then he rapidly climbed down and charged us, sending men who had faced down three hundred pound adult male orangutans scrambling into the moored canoe. Everybody enthusiastically pushed off, and an angry-looking Willie kept pacing the edge of the jetty until we were well out of reach.

Observing from the other side of the river, we were surprised to see Herman come back out of the forest and approach Willie from behind. Anxiously, we watched as he circled around and started walking towards Willie face-on. We were more than surprised when Herman crouched down in front of his much larger cousin, did a quiet vocalization, and hugged Willie’s chest. When Willie acknowledged him with a quick pat, our jaws dropped with surprise. This behavior was the opposite of what it had been towards each other at the Care Center.

The next day a follow-up team returned to observe the macaques and track the release progress. Both Herman and Willie appeared at the release site throughout the day, especially around the time of supplementary feeding. Herman ate bananas peacefully alongside the released ex-captive orangutans, while Willie was much more interested in grimacing and chasing assistants away from the feeding platform and off the jetty. Both macaques appeared in excellent health and spent most of the observed time foraging and climbing.