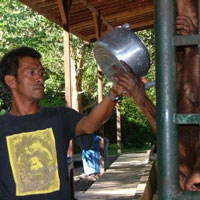 I want to work with orangutans till the day I die.

At nineteen years old, young Sia defied his father’s wishes and began a job which he had wanted since elementary school.

When Pak Sia was 10 years old, Dr. Biruté Mary Galdikas was already hiring Dayaks (natives of Borneo) for her Orangutan Research and Conservation Program (ORCP) in his home village of Pasir Panjang. Dr. Galdikas was Louis Leakey’s third primatologist protégée, following the footsteps of Jane Goodall and Dian Fossey in studying wild great apes. The program’s original research site was (and still is) the Camp Leakey study area, in the heart of Tanjung Puting National Park, southern Central Kalimantan (Indonesian Borneo).  Sia started work in 1989, when the ORCP had already established three rehabilitation and release centers in the national park where orangutans, orphaned by illegal loggers and miners, were being nurtured and trained for return to the wild. It was at one of these facilities that Sia started his orangutan career as carer and rehabilitation assistant. That year, there were six young orangutans at Tanjung Harapan Station.

Today, forty-year-old Sia is responsible for over 300 orangutans as Feeding Coordinator of OFI’s Orangutan Care Center and Quarantine in Pasir Panjang. His tasks of finding fruit and vegetables to feed the apes, balancing the food budget, and overseeing the five times a day feeding are no small peanuts. When asked about the challenges of his job, he frowned for a while, clearly trying to find an answer for me, since his initial response of “Oh, I love everything about my job” didn’t satisfy me. Finally he nodded. “It’s very sad for me when we can’t give food to the orangutans on time. They get hungry like us and it isn’t their fault they are in cages; it’s people’s fault, so we are the ones that must feed and help them”.
In his twenty years with OFI Sia has helped orangutans in Tanjung Harapan as care giver, in Camp Leakey as a forest research assistant, in Jakarta as  care giver for ten captive orangutans being repatriated from Taiwan to Indonesia, and in the Care Center as all of the above and more. In fact, the father of three (soon to be four) children once proved his dedication when he informed his former wife that if she didn’t like his work with the orangutans (which she resented), she would be the one doing the leaving.

Indonesians are a very clean people. It is not uncommon to wash four times on a hot day. I asked him to recount his first day at work for me and he animatedly described how he bathed once in the morning, and then became progressively covered in the urine and feces of his clinging charges. Smirking, I remarked that he must have had some second thoughts by nightfall. He said that he didn’t take a day off for the next three months because he couldn’t bear to hear the babies crying when he tried to leave.

Sitting on a fruit crate across from the Dayak with the deceptively fierce face, I wrap up with asking him what he intends to do next in his life. He replied simply “Nothing. I want to work with orangutans till the day I die”.