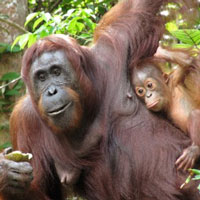 Today, October 15th, is Thor’s first birthday! Thor was born in Camp Leakey. The very first photographs we have of him and his fragile twin brother who died shortly after birth were taken in the trees near and on the ironwood causeway leading to Camp. Now that he is fully a year old, Thor is moving more steadily in the trees and beginning to explore the world around him. Sometimes, while his mother Tut rests, Thor moves as far as 5 meters away from her! He often plays non-stop, twisting and hanging from twigs and branches in the most unusual positions. It is mesmerizing to watch him; his energy and curiosity are extraordinary. In this he is very little different from many orangutan infants his own age. However, he’s still only one year old so most often he clings tightly to his mother Tut as she eats, sleeps, and travels through the rain forest canopy.

Here are some recent photos of little Thor….