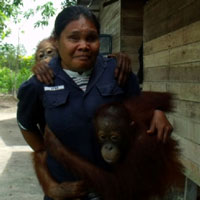 After repeatedly telling her that I have it on good authority that she can speak English well, Ibu Ipuk simply replies in English: “I don’t speak English! Who told you that?” With everyone at the forest facility laughing about her reply, Ipuk herself is probably laughing the hardest. It is a perfect example of the shy but funny character that is Ibu Ipuk.

When visiting the Care Center, there are a few caregivers that are certain to leave lasting impressions. Three of these very distinct employees are Ibu Ipuk, Ibu Juni and Mr. Lagu. These three staff members have two major things in common: they are siblings and they are completely blind! It is an unexpected disability for caregivers who look after orangutans and follow them on their daily outings in the forest. Amazingly however, these three siblings have overcome their condition and are able to perform their jobs just as well as every other OFI staff member.

Born sighted, Ibu Ipuk has lived with her condition for fifty years. It is an exceptional sight to see her walking, as she doesn’t use a stick or her hands to reach out in front of her. Even with two orangutans clinging to her body, she easily finds her way from the night enclosures to the playground behind the facility. She says, “I never use a stick for walking, I just feel everything with my feet.” As usual, she is laughing while she tells me this, and she makes it seem like the easiest job in the world and I’m silly for asking.

Ipuk is a very cheerful woman with a special sense of humor. Often she is joking, laughing, or quietly chuckling about something. When asked if she remembers any specific funny situation or moment on the job, she tells me: “There are too many funny moments! But it is funny when we take the orangutans to the forest. Sometimes they nip me and sometimes they poop on me!”

Like so many times before, we share a laugh. I think to myself that it’s certainly a blessing to be able to laugh about these things when working with orangutans.

It is said that when a person loses one of his/her senses, their other senses become stronger than usual. I wonder about this while Ibu Ipuk talks about the forest and her love for nature. It is the sound of the forest, the warm touch of the sun on her skin, or a light breeze on her face that makes her appreciate being outside so much. While in the forest with the orangutans, Ipuk likes to find and collect young leaves to feed to her “favorite animals, the orangutans.”

Besides fighting for the conservation of orangutans and their rain forest habitat, Orangutan Foundation International (OFI) is also committed to creating positive and sustainable employment opportunities for the local residents of the small village of Pasir Panjang and other Dayak and Melayu towns and villages. With almost 200 local assistants, OFI has helped several villages and locales to become educated about, and actively involved in, combating the environmental and conservation-related problems facing Indonesia. OFI tries very hard to give opportunities to as many local people as possible, especially the aboriginal people of Borneo, the Dayaks, as well as disabled people. We understand that, in the end, it is the local people who will have to save the orangutans and their habitats from extinction.

But again, don’t think that Ibu Ipuk is any less good at her job than anyone else! One last example:

While spending my day with Ipuk and her coworkers, there was one orangutan, Morgan, who kept nipping everyone except Ipuk. She told me that she and Morgan have a special connection and that Morgan never nips her. Morgan does like to hide from her sometimes though, and although I cannot help but laugh about this to myself, in reality Ibu Ipuk has no problem retrieving Morgan, drawing Morgan close with some food and then hugging Morgan, just like her colleague caregivers would do.

Ipuk and her siblings are an example of the ability of humans to adapt to special conditions and their environment. As a matter of fact, they are not just an example… they are a great example!