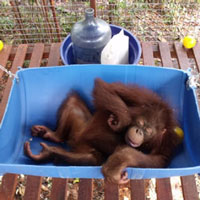 The work of enriching and improving Hockey’s home continued long after the actual construction was finished (see “A New Home for Hockey”). Indeed, a lot has changed since Hockey first moved to the new sleeping enclosure built especially for her. In the beginning, Hockey and her friends were given temporary enrichment items, such as rattan balls, to keep them occupied. Now, however, there is a large bucket hammock and rope from which four tires are suspended, along with many tubs, water bottles, and balls. These stimulating sets of objects were designed and installed by Ibu Mariyanti, the OCCQ’s Enrichment Coordinator, and Kylise, our current long-term Enrichment Volunteer.

After the hammock had been installed, Hockey immediately took to this ideal sleeping place. As Hockey loved to literally hang out and lay around, she could often be found resting in the blue barrel hammock. Unfortunately, getting in and out of the hammock turned out to be difficult for her and Hockey repeatedly got her underdeveloped left arm caught up in the iron chains holding up the hammock. This left Ibu Maryanti no other choice but to increase the height of the hammock, making it impossible for Hockey to reach the chains. Sadly, the hammock is now out of reach for Hockey, but fortunately she quickly decided that resting in an old fruit basket was just as comfortable. We are working on an arrangement for the chains and hammock that will be safe and comfortable for Hockey. Does anyone have any ideas?

After some weeks in her new home, Hockey is getting used to having roommates. At first, there was a lot of playful biting. Due to Hockey’s large size relative to her roommates, this was initiallyworrisome. Now, however, everybody has adjusted to living together peacefully.
Hocky is the queen of the enclosure, and the other orangutans leave her alone if she doesn’t want to play. However, when she is tired and lays flat on her belly to rest or nap, her smaller friends often seek comfort by lying against or on top of her. She seems to enjoy this.

Recently during her daily outings to the forest, Hockey has seemed more tired than usual. Perhaps this is because of the hot weather or perhaps Hockey is now getting so much exercise while in her night enclosure that she doesn’t need as much exercise while outside. Either way, in the forest, Hockey loves to lie on her stomach and relax for long periods of time. Sometimes she explores the forest slowly and reaches out for branches or leaves, sometimes she eats a bit of mud, but most of the time she likes to rest.
It seems like resting is important for this friendly orangutan because too much exercise or excitement sometimes results in her having what appear to be seizures. These attacks can last for several minutes and Hockey’s eyes roll back in her head and her body shakes violently.
It is a scary sight and all that her caregivers can do is gently hold her and make sure that she doesn’t hurt herself. These are stressful moments for everyone and cannot be over quickly enough, but at least Hockey is in the comfort of loving hands when it happens.

In the future, Hockey will develop increased physical abilities and fitness, thus lessening the frequency of her seizures. Right now, all we can do is carefully take her in to the forest and closely monitor her. Hockey’s new enclosure is a good beginning to our ongoing effort to stimulate and enrich her life.

Orangutan of the Month: Gistok