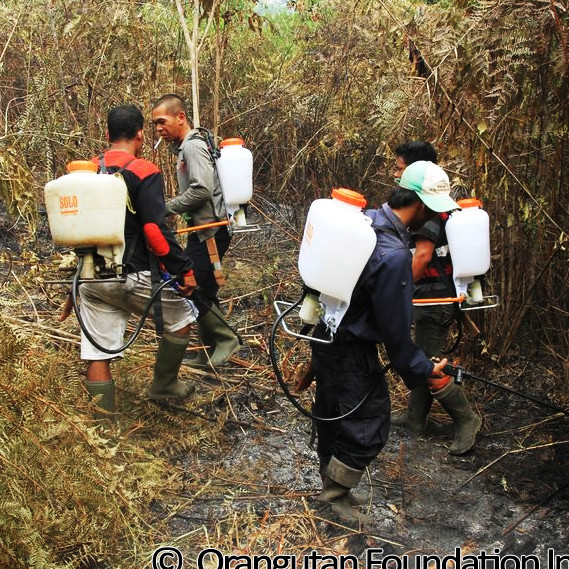 It’s fire season again! This is the time for which OFI prepares each year. This is the time we all dread! The dry season was slow to come this year, but all it takes is a solid week with no rain to get the forest to burn. When it came, it came, as it always does this August and September, with a vengeance! 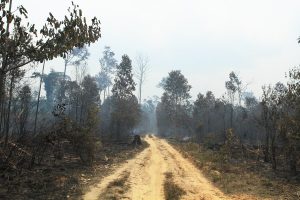 OFI is no stranger to fire fighting and prevention. It seems to be always in our thoughts, even during the long wet season when we often dream of being dry. We often greet the returning rains with comments like “At least it means no fires”.

Since May this year at OFI’s remote release camps on the edge of Tanjung Puting, where the palm oil plantations meet the forest, our staff have been preparing for the coming fire season.

In May 2014 our OFI construction volunteer team helped build a fire patrol and prevention post near the boundary of the forest to help staff identify fires early. Since May OFI staff has been rotating days at this post and going on patrols looking for local encroachment and identifying fire risk areas. 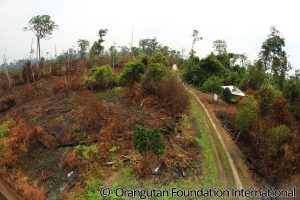 Our busy but small field staff spent weeks in July and August cutting two fire breaks several miles long at the forest edge to try to get ahead of the burn and prevent fires in open areas spreading into the forest. We hoped these efforts would prevent the fires from approaching our release camp and threatening the forest home where we have recently released wildborn ex-captive orangutans. But the fires came, as they always do. 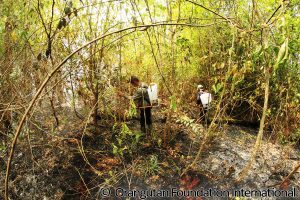 So far, four fires have been fought and extinguished by our OFI field staff this year. The most recent blaze started September 14, 2014. OFI staff fought this fire for over three days with backpack spray equipment as nearby streams and swamps had dried up, preventing the use of pumps and fire hoses. Staff managed to put out the fire just before nature lent a helping hand and it finally rained. The rain put the stop to this fire spreading. This one fire in September burned an area of over 84 ha on the edge of our release forest. This fire reached within several hundred meters of our latest release camp in the Seruyan forest. We have no doubt that this fire was started intentionally. We believe that fires of this sort are most likely started by locals working with nearby palm oil concessions in order to open up and claim new agricultural areas for palm oil!

Despite personal and financial costs, OFI and local field staff will continue to defend the Seruyan forest and camps, to the best of our ability. We plan to cut wider fire breaks that seem to work well. We now have plans to dig wells to help provide water during the height of drought. In August 2014 we built another fire patrol post in a different area of the Seruyan forest for further fire prevention. We are constantly buying new equipment including pumps, hoses, and shovels. 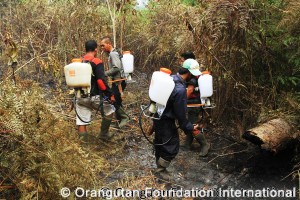 Unfortunately, as I write this in October 2014 new fires have started both in our Orangutan Legacy Forest and in the Seruyan forest.

You can help! Please donate to our fire prevention efforts. This annual reoccurring threat is one that we must fight. Your dollars can help us hire new staff, buy better equipment, and lift monetary restraints on a job that is physically and emotionally draining.

OFI sends many thanks to our tireless local staff and to you for supporting OFI’s efforts to protect orangutans and the forests which are their only home.