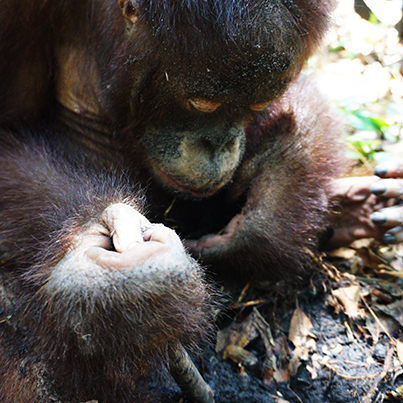 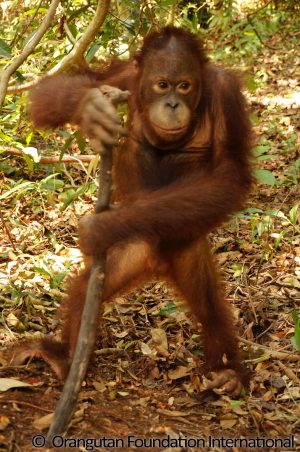 Every morning in the grounds of OFI’s Orangutan Care Center and Quarantine, young orphaned orangutans on their daily release take to the trees for a day of riotous, energetic play. The forest canopy shakes with their tree-top romps as orangutans of all ages wrestle and chase each other to exhaustion. In this sea of exuberant youngsters, it might be hard to spot Ariel. His quiet, deliberate movements could almost go unnoticed amidst the more chaotic theatrics of his peers. As one of over 70 young orphans currently living at the OCCQ, Ariel is certainly not the most out-going orangutan. He is rather shy, especially with newcomers. He is neither the loudest nor the wildest. He often keeps to himself, and rarely instigates conflicts. Yet it is precisely these reasons why Ariel is so captivating. No matter the circumstances, Ariel remains an island of steady calm. 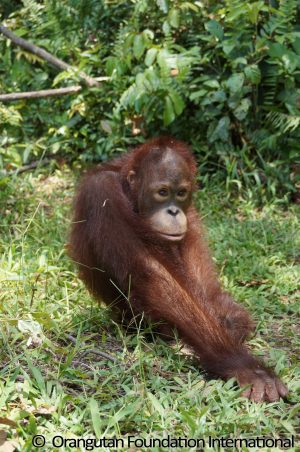 Growing up at the Care Center isn’t the life Ariel was supposed to have. Like all orangutans currently under the care of OFI, (one exception), Ariel was born in the wild. He had two precious, irreplaceable years with his mother where he learned from her about the ways of the forest. Had she not been shot and killed in a palm oil plantation, Ariel would have had many more years to grow and learn by her side. Orangutans typically stay with their mothers until 8 years of age, Ariel only had two! Following her death, Ariel was kept as a pet in Pangkalan Bun by a local store owner. His owner gave him bottles of milk to drink and he spent his days sitting on the floor, watching television. At night, he slept in a bed with a pillow and blanket- far removed from his childhood sleeping on his mother’s chest high in the forest canopy.

After a year of indoor living, Ariel was surrendered to the Orangutan Care Center and Quarantine in Pasir Panjang. He arrived as a shy and quiet toddler, hesitant to make friends or interact with his caregivers. Slowly he adjusted to life at the clinic. Over the years, Ariel has flourished and become a handsome, thoughtful juvenile orangutan. With regular outings to OFI’s “forest school”, Ariel rediscovered his place in the jungle. 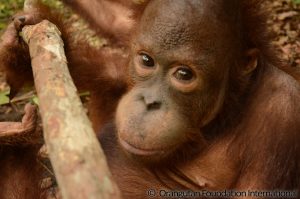 The first thing you notice about Ariel is his stare. His large, chocolate brown eyes will always look directly into yours, like he is trying to tell you something. But his face remains impossible to read. He’d probably be a great poker player if he ever took up the game. Ariel’s deep auburn hair is darker than his peers and he is also considerably larger as well. This makes him relatively easy to tell apart from the other youngsters who at times look indistinguishable from one another. However, his understated presence keeps him somewhat of a mystery. 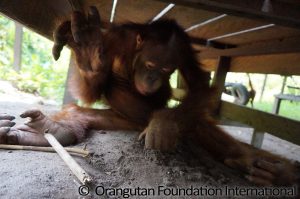 In the mornings, Ariel likes to hitch a ride to the OCCQ forest on the back of his caregiver. He is very easy to carry, usually wrapping both arms around their shoulders in a snug embrace. But once they reach the forest, Ariel makes it clear that he won’t be needing any hand-holding! He seems immediately consumed in his own world. With strong arms he leaves his caregiver’s back and pulls himself to the top of the OFI playground to observe the surrounding forest, quietly making his plan for the day. In no time, Ariel is off, heading directly into the thick of the branches. He waits for no one as he marches confidently into the woods. Where does he go on these solo expeditions into the forest? Many of OCCQ orphans will head straight for the canopy, but this is not the case with Ariel. He dabbles in tree climbing but much prefers to traverse the forest floor. After all, this is the best place for him to gather tools for his favorite activity- digging! 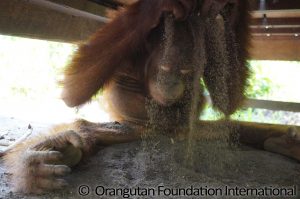 Around the middle of the day, when the sun is at its highest point in the sky, Ariel starts to dig. And Ariel digs like he’s a child on the beach getting ready to build the biggest sand castle! He digs like an archaeologist looking for dinosaur bones! He seems to have big plans for these excavations but what these plans are we do not know. Walking around the forest floor, he gathers sticks in preparation for a later dig. Regardless of their practicality, Ariel likes to shovel with the largest, longest branches he can find. He sits down and works with a quiet, diligent focus. Once he breaks through the hard crust of soil on the surface he uses the slightly finer dirt underneath to toss onto his head and face, giving himself a forest facial. The other orangutans become curious of his activities and will occasionally stop to participate in the dig. Ariel certainly doesn’t mind the volunteer labor. Digging in the hot Borneo sun is hard work! But long after the others have grown bored and move on, Ariel will continue to quietly dig on his own! 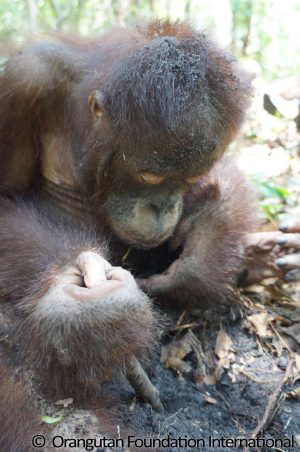 It’s not all work out in the forest. Like every juvenile male orangutan, Ariel can’t resist a good bout of feisty playing-wrestling. He makes a well-suited opponent for Mason, a fellow orangutan that is small but known for playing rough! Mason has the tenacity but Ariel has size on his side and he knows how to use his strength wisely. He likes to lead play-sessions into the lower hanging trees where he can climb up the branches and over-power his opponents on the floor. While, Ariel won’t pass up an invitation to play with his friends, he is happy to spend most of his forest time alone. He is more focused on discovering his environment than rough-housing with his peers.

Every day, Ariel continues to gain strength and competency in the forest from his extended periods out on release. Ariel’s slow and calculated responses to his surroundings indicate a growing maturity. One day, he will make a great alpha male. We hope Ariel gets his chance to return to the wild. Like so many others, Ariel was robbed of his natural life. Growing up at the Care Center provided him with the second chance he otherwise may not have had but ultimately, it is not where he belongs. Orangutans are the people of the forest and it is in the forest where they belong. And hopefully that is where all will soon return.

Orangutan of the Month for March 2017: Lumley

Orangutan of the Month: Daring Dominique