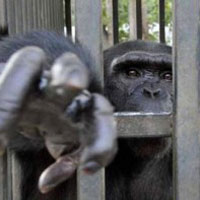 The Threat of Illegal Capture

Most people who read this website are probably aware of how dire the situation facing wild gibbons like Auri and other primates is, but I’ll remind you anyway. According to the International Union for Conservation of Nature (IUCN), nearly half of all primate species – including apes, monkeys, and big-eyed prosimians like lemurs – are threatened with extinction. Orangutans, gibbons, and all of the other apes (except humans, of course) fall under the IUCN Red List endangered status. Over the past century, orangutan numbers have dropped from about 500,000 to 50,000; most tragically, our awareness of this 90% loss of our cousin species has not slowed down their rate of human-related decline in the wild. A UNEP report entitled “Stolen Apes: The Illicit Trade in Chimpanzees, Gorillas, Bonobos and Orangutans,” reveals that between 2005 and 2011, about 22,000 great apes were captured or killed in the wild. This translates to about 3,000 great apes per year, and the trend is not slowing down.

Over the past century, orangutan numbers have dropped from about 500,000 to 50,000; most tragically, our awareness of this 90% loss of our cousin species has not slowed down their rate of human-related decline in the wild.

The UNEP report attributes these staggering numbers to the burgeoning illegal wildlife trade which has become a multibillion-dollar international enterprise. Hundreds of orangutans at the Orangutan Care Center and Quarantine (OCCQ), and probably the gibbon Auri, are victims of this very trade. In the case of most primates, the threat of the wildlife trade is amplified by another major threat to survival – habitat destruction. Frequently, wild primates are captured by the very people logging tropical forest habitat or extracting other valuable resources. When these encounters happen, humans tend to either see the other primates as a threat to their safety or a potential profit as they can sell them as meat or pets. Infants are typically left unharmed so that they can be sold as pets but to obtain an infant, the mother and/or several members of a group are killed or injured while defending the infant. To make matters even more dire, the extremely low reproductive rate of most primate species means that every single animal that is captured or killed is a significant blow to the survival of wild primate populations.

In many countries where the illegal trade in endangered primates is most prevalent, there are laws in place against these actions. Unfortunately, because of the corruption of governments and the difficulty of law enforcement in wild or remote areas, the killing of endangered primates largely goes unmonitored and unpunished. The UNEP report states that during the seven-year period in which 22,000 great apes were captured or killed, only 27 arrests were made. And only a small handful of those were prosecuted.

How Your Television Hurts Primates

Thankfully, countries like the United States make it illegal to import primates into the country and are effective in enforcing these laws. But even the US is not innocent in this troubling global problem. The country still has large captive populations of primates that have been bred for decades for use in biomedical research, circuses, entertainment, roadside zoos, and as pets. There exists a whole number of serious ethical and safety concerns around these practices. Readers are encouraged to learn more about those concerns by looking into the links at the bottom of the page, but for the sake of this article I want to focus on the impact that the pet trade – even when it is based on breeding rather than wild-catching – has on wild populations of primates.

Chimpanzee “entertainers,” like the ones pictured above, are tragically popular in advertisements, films, circuses, roadside zoos, and greeting cards. Chimpanzees are highly endangered in the wild, but for several decades a sizable captive population has existed in the United States for use in research and entertainment, practices that have recently shown to affect the conservation of their wild counterparts in Africa. In a 2011 article published in PLoS-one, researchers found that study participants who were shown photos of chimpanzees in the presence of a human or in a human setting (like an office) were significantly more likely to think that chimpanzees make good pets, and also that wild chimpanzee populations are fairly stable. In contrast, participants who were shown images of chimpanzees in more natural contexts had a more realistic understanding of their grim status in the world’s remaining wild habitats. Indeed, chimpanzees are one of the most threatened primates in Africa, with habitat loss and a lucrative illegal hunting trade threatening to wipe out entire populations.

While this study focused on chimpanzees because of their prevalence in entertainment, the same conclusions could likely be drawn for the many other primate species used in similar ways in the media. Every time we endorse primate entertainment by watching an advertisement in which they appear, or buying a gift card of a “smiling” chimpanzee (who is actually displaying a fear grimace), we are perpetuating the practice and perpetuating the (false) perception that primates are obedient creatures meant to meet our own needs and wants, not endangered animals who desperately need our help to survive in the wild.

The need to avoid portraying apes as ideal pets or objects for our entertainment has been a challenge for me as the OFI Communications Volunteer over the past several months. I have written several articles in which I try to convey the inner lives and personalities of the orphaned orangutans in OFI’s care. When I write about their endearing quirks and show photos displaying their captivating faces, my hope is that readers will come away feeling some sense of compassion or empathy that will compel them to find out what they can do to help wild orangutans. But any time that I show a baby orangutan’s sweet face, or talk about how much they love to cuddle, I know I am running a risk as well. Once you see one photo, you want to see more, and you might stop differentiating between photos of apes in a wild or rehabilitation setting, and those who are being exploited in captivity.

What You Can Do

Luckily, EVERY person can have a say in the fate of the many primates who are victims of the pet trade. If you live in a country with issues in the illegal wildlife trade, urge your government to enforce its laws, and educate your fellow citizens on the moral and conservation concerns of this dangerous practice. For those who work with wild or rehabilitating primates, or who have the privilege to visit a country where you can interact with primates, only publicize your photos if you are simultaneously making clear the context of the photo and the conservation status of the species. And if you live in a country without an illegal pet trade but a where primate “entertainers” are shown in popular media, educate yourself and your peers on the un-amusing implications of the primate entertainment and pet business. Avoid giving your money and attention to media sources that use primates in entertainment, and let companies who use primates for entertainment know that you don’t think it’s OK. Finally, please give your support to groups like OFI, who are working to educate the public, protect wild primate populations, and give a second chance to those who were taken from their wild homes.

Gibbons are the uncontested masters of a specialized mode of movement known as brachiation, or hand-over-hand swinging. When I first saw a gibbon swinging through the trees near Camp Leakey, I was mesmerized by the beauty and precision of her movements. Waking up in the morning to the ethereal “ouwa-ouwaaa” duets of gibbon mates and the dew on my skin made me stop, breathe deeply, and catalogue the sensation in my memory. For me, gibbons are such a perfect representation of the wild beauty of the rainforest. Seeing how serenely they fit into the forest environment made it all the more difficult to be in Auri’s presence at the OCCQ . Somewhere along the line, the opportunity to live a natural life was yanked away from her by humans. She likely was forcibly separated from her mate and her baby, bonds that are meant to go deep and last long. Now she sits alone in a cage. Obviously we hope that the OCCQ is a temporary home for Auri. She continues to improve, and we think she is now healthy enough to move to a gibbon rehabilitation center some hours away from the OCCQ. At that center, veterinarians and caregivers would better be able to assist her when she is released into the wild. Because gibbons are monogamous pair-bonders, they will try to match her up with a male gibbon with whom, hopefully, she will produce offspring, increasing both their chances of survival in the wild as a pair.

But there are some uncertainties about whether Auri could ever be released. She does not make the same vocalizations that wild gibbons do. We have not been able to observe her foraging on her own, and are concerned about whether she has the ability to eat a variety of foods and defend herself with so many teeth missing or damaged. It may be that Auri was held in captivity too long to remember what her natural behavior is supposed to be. But we will let the gibbon experts make that call and hope for the best for her.

For the hundreds of thousands of primates like Auri who have been taken from the wild, or who never even got the chance to experience it, we may never be able to restore them to their old lives, the lives they were meant to live. But we can do our best to improve their conditions, return them to a fresh start in the wild, and prevent more of our fellow primates from suffering the same loss.

“Fact and Fiction: Monkeys and Apes as Pets”

“Primates as Pets, in Entertainment and in Research”

“The world’s 25 most endangered primates: nearly a quarter in Madagascar”