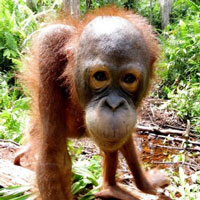 When I am with the infant and juvenile male orangutans at the Orangutan Care Center and Quarantine (OCCQ), I sometimes picture what they will look like when they are fully grown. In their first years of life, all orangutans develop slowly and maintain a fairly small size. But once they enter adolescence, male orangutans in particular hit a huge growth spurt. In a matter of 3 or 4 years they are virtually unrecognizable in appearance, and sometimes in behavior as well. It is just so hard to imagine some of the wide-eyed, affectionate young boys in the nursery and the playpen growing into sub-adults of immense strength and autonomy. Dominique is one of those boys – a carefree orangutan on the verge of the transformative stages of adolescence.

You might expect someone named Dominique to have a suave personality, and this guy certainly fits the standard. When I first met Dominique, he climbed up into my arms so that he could look me in the eye. He then smoothly wove his fingers into my hair and pulled my face forward until our foreheads touched and his dark, enchanting eyes were gazing deeply into mine. This felt quite intimate for a first encounter, and I couldn’t help but feel like Dominique was trying to charm me! If a human male acted so forwardly toward someone he’d never met before, he might find himself on the receiving end of some indignation. But I found Dominique’s advances amusing, and soon learned that he plays quite the Don Juan with all the ladies – both human and orangutan! Indeed, Dominique seems to have cast some sort of spell over the female orangutans who stay in sleeping enclosures near him. When he is carried past female orangutans on his way to or from daily forest release, they regard him as if he was the most dashing fellow around. They even push each other out of the way to get a closer look at him!

But for now Dominique is kept separate from the girls who are enthralled with him so he finds other ways to entertain his fun-loving personality. I once happened upon Dominique after he had discovered (or stolen) a caregiver’s jacket. It was an old, torn jacket that he dipped in a swampy puddle until it was soaking wet. He then put the jacket on over his head, and got his arms into the sleeves. Standing up straight on two legs like a human, his head lost somewhere inside the jacket, he staggered around a bit, holding his arms high in the air and flopping his hands about. It looked like he was doing some silly dance or imitation of his caregivers. Dominique spent a long time rolling around and hiding in this jacket until a caregiver came to reclaim it.

When he is not being mischievous with caregivers’ belongings, Dominique is quite amiable. He often comes down from the trees to be carried around by caregivers or to just to sit in their presence playing lighthearted hand-slapping games. He is good friends with another orangutan named Karbank. When he spots Karbank, Dominique follows him into the forest and initiates a playful wrestling match. Karbank has a unique wrestling method. He dangles upside down from a branch (by his feet) and grapples with his arms, while Dominique stands on two feet on the forest floor and slaps his hands up at him. With the help of gravity, Dominique usually gets Karbank down to the forest floor where the shenanigans continue. While many of their companions are reaching an age where they lose their desire for lighthearted diversions, Dominique and Karbank find a sameness of spirit – and an outlet for their playfulness – in each other.

But that’s not to say that Dominique isn’t developing into an individual who will one day be a proficient wild orangutan. He is a good, calculated climber who seems to know exactly how he will get somewhere before he sets off. It’s as if he pre-plans where he will forage that day to find the most food, so that he can leave as much time for amusements as possible. Once he has his fill of fruit and leaves, Dominique’s climbing becomes noticeably less purposeful. Some orangutans swing back and forth on vines to gather up enough momentum to move between trees, but Dominique seems to do it just for the fun of it, and often recruits other orangutans to swing with him.

Imagining Dominique as an adult orangutan is bittersweet. Once he is released into the wild, I know he will have no problems courting females, creating progeny, and finding enough food to get by. I just hope he finds a way to maintain some of his innocent, lighthearted perspective on the world despite the ever more pressing concerns of survival as a wild orangutan. Whatever the coming years hold, I will always remember the flirtatious and lively juvenile orangutan who never failed to brighten my day.