Look at these photos of infant orangutans. What are the first thoughts that come into your head? My guess is that your reaction is something like, “So cute!” or “I want to cuddle them!” Maybe you’re even thinking, “I want one!”

Unfortunately, the charms that orangutans and other primates possess push too many people to take their instinctual reactions to extremes. Because monkeys and apes are so similar to humans and are quite adorable when they are young, humans often capture them to be kept or sold as “pets” or similar objects of entertainment. As human development destroys more and more natural habitat, obtaining primates to keep or sell as pets is becoming ever easier. Beyond the individual harm this practice may bring to both the humans and “pets” involved, it has been a major factor in bringing some primate populations to the brink of extinction.

Before I delve into this topic too much, I’d like to tell you about one of the non-orangutan residents at the Orangutan Care Center and Quarantine (OCCQ). While the OCCQ’s main purpose is to rehabilitate orangutans, we have a policy of accepting every injured, orphaned, or displaced animal that is brought into our care.

On February 20th of this year 2013, a van pulled up at the OCCQ with a gibbon on board. Orangutans, chimpanzees, bonobos, and gorillas are great apes. Gibbons are also apes but, because of their smaller size, are commonly known as “small apes” as opposed to the great apes. Gibbons are monogamous creatures, establishing lifelong male-female partnerships that are central to the care of their infants and the protection of home territory.

As the gibbon was brought out of the van, veterinarians and caregivers hurried to retrieve her. She was seriously injured which the people delivering her attributed to “falling out of a tree.” But she had a large gash above her left eye, two bullet pellets lodged in her body, and complete loss of mobility in her lower limbs. She was lethargic, extremely thin, dehydrated, in a state of shock, lacked proper depth perception, and had apparent brain damage.

All of that does not happen just from falling from a tree, especially given how stunningly and with what great grace agile gibbons move in their arboreal habitat .

Our veterinarians immediately tended to the wound above the gibbon’s eye and administered fluids to help her regain hydration and strength. Two volunteers, Kat and Rachel, did not leave the gibbon’s side. They tried to create a comfortable environment for her, but she was clearly very distressed and disoriented. Whenever anyone tried to move her even slightly to change her diaper, feed her, or give her fluids, she would start vomiting. Kat reported that carrying the gibbon around was “like carrying a rag doll” – she had no ability to move her legs, and did not even seem to have feeling in them. 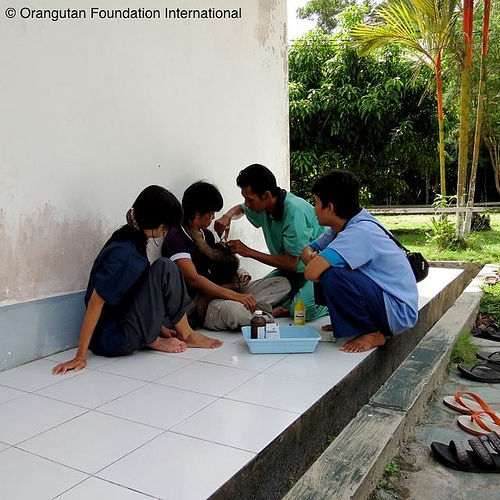 The veterinarians checked the gibbon regularly to continue giving her fluids and medication. As they made more observations, they estimated her to be a young adult female. They also noticed that she was lactating and had swollen breasts, indicating that she had recently lost a baby. One of her canines was missing, and several other teeth appeared to have been filed down. Removing or blunting teeth is a common practice for people keeping primates in captivity.

A caregiver gave the gibbon the name “Auri,” after the region she came from. Auri was still very unwell as darkness fell, so Kat and Rachel remained with her through the night. They were so worried about her condition that they stayed up all night to monitor her and hand feed her because she was unable to eat on her own. She survived the night, but remained lethargic and disoriented for multiple days. The volunteers, veterinarians, and caregivers worried that all their efforts would be for naught. After spending many sleepless and stressful nights with Auri, the volunteers started noticing that she seemed to be regaining much of her mental awareness. She started moving her legs a bit, eating on her own, and even threatened to bite the volunteers when they tried to change her diaper.

Noticing these improvements, Kat and Rachel started taking Auri outdoors so she may sit in the grass, observe her surroundings, and generally receive more stimulation. After a day she started crawling around by herself on the ground, and then even started to climb the short fruit trees around the veterinary facilities. As it became more and more difficult to get Auri down from the trees, the volunteers and veterinarians decided she was ready to live more independently, though she was still far from being ready for a wild life. So after two tireless weeks of giving Auri constant attention, the volunteers started to refurbish an old outdoor enclosure for her to live in. They placed branches and ropes in the enclosure for climbing and platforms and a tire swing for resting and sleeping. By the time her enclosure was completed, Auri was starting to get really irritated by human company, which is a good sign because it means she was coming back into a wild gibbon’s mindset. When she was put in her new enclosure, she immediately seemed more at peace having her own space. She continued to eat well on her own and enjoyed exploring in her enclosure, which was made easier by the fact that she had regained full use of all of her limbs.

There are a few possible scenarios, based on Auri’s initial condition, of what might have happened to her before she arrived at the OCCQ. As mentioned above, she likely had a suckling infant shortly before coming into our care. Her bullet wounds were much older than the gash on her head, and she had clearly been through serious trauma quite recently. This could suggest that she had been caught twice in her life, or that she was beaten for “misbehavior” after her original capture. She may have been captured so that her baby could be taken and sold as a pet, or she may have given birth while in captivity. If the latter is true, her more recent wounds may have occurred when she lashed out against the people trying to take the infant from her (again, to sell as a pet). This is all speculation, but we can say with certainty that Auri was harmed by humans, and can say with confidence that her injuries were related to her and/or her infant being captured as pets.

There are stories like Auri’s for every primate that is caught in the wild to be kept in the human world. Most of the 320 plus orangutans at the OCCQ have haunting backgrounds. Baby Bim Bing was taken from her mother and kept in a tiny, dirty chicken cage until she was confiscated. She was full of parasitic worms when she first arrived at the OCCQ, and still shows a lot of vulnerabilities. Adult female Joy once used to hold cards above her head announcing the bout number between rounds in circus-like orangutan “boxing matches” put on in Thailand as a form of entertainment. Infant Steppenwolf arrived at the OCCQ with severe burns on his hands and feet, suggesting that he lost his mother in a fire meant to scare the pair out of a particular tree or area. Each of these stories is a harsh reminder of how horrible the illegal wildlife pet trade is.

The more I learned about the histories of the animals at the OCCQ, and the more time I spent with the traumatized and confused Auri, the more heartbroken I became. I wondered how much the infant orangutans thought of their mothers, how much Auri thought of her infant, and what had actually become of all these lost family members. Those musings pushed me to delve further into the topic of primates as pets, because the damage that is done to individual creatures is just one component in the enormous threat to the survival of wild populations.

To read about the perils of the primate trade, and for more on Auri’s fate, wait for “Part 2” of this story.