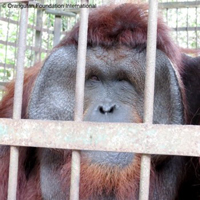 The Orangutan Care Center and Quarantine (OCCQ) in Borneo is a temporary home to hundreds of young orphaned orangutans building up the skills and confidence they need to be released back into the wild. But the OCCQ is home to a small handful of fully-grown adult male orangutans as well. One of these big guys is Montana, a strikingly benevolent and quick-witted orangutan with a painful past and a complicated future.

Adult male orangutans are quite distinctive. They have large cheek pads flanking their face, great sagging throat sacs, and they vocalize what is known as a “long call.” All of these traits are likely linked to their mating system in the wild. The “long call” resonates throughout the forest. It serves as a way for males to establish dominance. The adult males at the OCCQ long call as well, and we take the frequency of their long calls as signs of which orangutans are “dominant” at the Care Center. Montana used to long call frequently, but now he does so least of all the adult males.

Most of the adult males at the OCCQ were already adults when they arrived at the Care Center, but Montana has been here since he was young. He was severely injured when he first arrived. He had shotgun pellets lodged in his head that had caused blindness in his left eye, and the entire right side of his body was lame except for his stiff arm. These injuries could have been the result of falling from a tree after being shot, or from being brutally beaten. Whatever ordeal Montana suffered, his mother probably did not survive it. His lameness and blindness have stayed with Montana his whole life. He walks with a limp and has some difficulty climbing.

We would hope that one day Montana could vie for dominance in the wild, but his injuries make the plausibility of release back into the wild complex. For now he remains at the Care Center near the people who have been with him for the majority of his life. Unfortunately, we can no longer take him out on daily releases into the Care Center’s forest. Because of his immense size and strength, Montana could severely injure both humans and fellow orangutans without even trying. Thus, we work to make Montana’s life stimulating in other ways. He lives in a tall sleeping enclosure with platforms, wooden beams, and multiple large tires. Despite his limited mobility, Montana frequently manages to get himself up to the highest parts of his enclosure so he can better survey the happenings of the Care Center. On the floor of his enclosure, he likes to sit upon one of the large tires, grab the outer caging for leverage, and then use his good leg to lift the tire and flop it hard to the side, thus scooting himself throughout the enclosure. This behavior is likely an adjustment to account for his limited mobility. Beyond the permanent enrichment of his enclosure, we are always looking for new ways to keep Montana stimulated.

Montana is a very observant and manipulative orangutan. Whatever you bring him, he figures out a way to keep himself entertained. All of the orangutans are given branches at the end of each day to build a sleeping nest. Montana is a good nest builder, but he likes to use his branches for other purposes as well. I have seen him sweep the floor of
his enclosure with leafy branches, or break off sticks to use for special “projects.” Once, by coincidence, I noticed Montana doing something quite remarkable. It was a day when a new sleeping enclosure was being built nearby Montana’s enclosure. As the sound of hammers hitting nails droned on, I noticed from afar that Montana seemed diligently occupied in some activity. Getting close enough to observe but not disturb, I saw that Montana was using a short, thick stick to hammer a flatter stick. He would do this for a bit, look over toward the cage construction, and then continue, going at the exact same rhythm of the construction workers. Of course, Montana’s work did not turn into anything of practical use, but this apparent attempt at imitation and modification of his surroundings is an indication of his high intelligence.

Other favorite types of enrichment for Montana include termite mounds, iced treats, and food challenges. He works his way through every bit of enrichment without faltering. But one of the best ways to enrich Montana’s life is just to give him some personal interaction. His sweet nature comes out when he interacts with his caregivers. The relationships he has developed with a few select caregivers are good enough that they can hold his hands and playfully grapple with him through his enclosure’s iron bars. In the wild, Montana would not have so many pleasant interpersonal interactions. Wild adult male orangutans live totally lives, only consorting with females for a short period of time to mate. If fully-grown adult males confront each other in the forest, it can result in vicious fights and/or flight. Because of his disabilities, we are not confident that Montana would be able to defend himself in the wild. But we are diligently looking for ways to get him released. As OFI buys more and more forested land, we are looking for areas where there are not currently dominant adult males. Another option would be to build a large enclosure in the forest so that Montana could move through the trees more freely. We would probably have to supplement him with food, but at least this would be a life much closer to freedom than what is he is living now.

When Montana was shot at and severely injured as a youngster, the people holding the shotgun surely were not thinking about what the act would mean for Montana. He could have spent more years under his mother’s care, learning forest skills and observing adult males when they crossed paths. Today he could be roaming freely as a strong dominant male, king of his own tract of forest. We are fighting to make at least parts of this life come true for Montana. Such a sweet, intelligent guy deserves all the restitution we humans can offer.

Orangutan of the Month: Ari