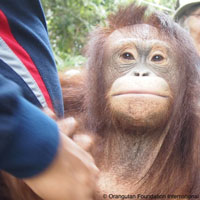 Jade on the morning of her release.

A tangible sense of excitement sets in at the Orangutan Care Center and Quarantine (OCCQ) in the days leading up to orangutans being permanently released back into the wild. OCCQ staff start cleaning and preparing transport cages, veterinarians do the final medical check-ups on the orangutans slated to be released, and caregivers spend some last tender moments with the orangutans they have watched grow up over the years. Surely the orangutans can sense the buzz of anticipation, but those who have been chosen to be released can never know how much their lives are about to change.

On February 15th, 2013 OFI returned four rehabilitated female orangutans to their forest home. In the week leading up to the big event I was able to get to know the personalities and histories of Jade, Liana, Kimba, and Noni – the four lucky orangutans set to be released. Jade and Liana had been in the same enclosure for a long time. Jade is a restless and curious adolescent who is always good-natured with her human and orangutan peers. Liana is a healthy, spry juvenile who often imitates the older, more skilled Jade. During daily forest releases at the OCCQ, both of these girls would move over great distances and build their own sleeping nests. They were always reluctant to return to their sleeping enclosures at the end of the day. As I got to know them, I knew that their companionship and love of the forest would help them immensely in their new wild life.

Then there was Kimba and Noni, who had also lived in the same sleeping enclosure during most of their time at the OCCQ. I was particularly touched by their story. Both arrived at the OCCQ as infants after their mothers were killed when rainforest was cleared to make way for plantations. Noni was sick when she arrived, but with daily treatment she eventually regained her health. Throughout their infancy, one of Kimba and Noni’s primary caregivers was Ibu Sumi, who has worked with OFI for many years and now is Deputy Manager at the OCCQ. Ibu Sumi was still a teenager attending school at the time. She would sleep through the night with Kimba and Noni and then would return to their side as soon as she was done with the school day. She still remembers how Kimba would cry every day as she left for school. She and the infants’ other caregivers had become the best possible replacements for the mothers the babies had lost.

Over the years Kimba and Noni continued to live and grow together. Today Noni strikes me as a smart, responsive orangutan who never loses her calm. She has beautiful eyes and a healthy coat of orange hair. Kimba is more restless and devious. She always gets what she wants, and what she wants is usually food. She once escaped from her sleeping enclosure while caregivers entered it to put in some large enrichment. She made it all the way to the Care Center’s kitchen, where she did a bit of plundering before being taken back to her sleeping enclosure. Her headstrong personality and diligence in obtaining food will bode well for her in the wild, where finding food and asserting dominance will be of the utmost importance.

Ibu Sumi has remained friends with Kimba and Noni over the years and speaks especially fondly of Kimba. When I asked her how she felt about them being released back into the wild, she said she would be sad for them to leave, but she would be more sad if they didn’t have the chance at freedom again. With tears welling up in her eyes, she patted her chest and simply said, “I’m very, very happy.” Of Kimba she said, “She wants to be free.”

Then the day of freedom arrived. By this point all four orangutans had been in pre-release quarantine for over thirty days. They were kept away from other orangutans and only a few caregivers were allowed contact with them in order to prevent them from obtaining any communicable diseases before their release. They were tested for TB and hepatitis and all four came back with negative results. In fact, one of the reasons these females were chosen for release was their excellent health. Noni, Kimba, and Jade are all large, strong, and active. Liana is a bit behind the others in size, but otherwise is skilled and energetic. Ultimately, we knew she would do best if she was released with her long term friend Jade. At the end of thirty days of confinement, these orangutans were very restless. But soon they would be out of cages for good.

In the morning on the day of the release, Liana, Kimba, and Noni were taken out of theirquarantine enclosures and moved into transport cages. Only two cages were used so that the roommates could make the long journey together. OCCQ staff had matted the floors of the transport cages with leafy branches. As the cages were loaded into the trucks, staff tied more branches over the tops of the cages to provide shade during the drive. Several caregivers who had been selected to monitor the girls for their first ten days in the wild jumped into the trucks, while the caregivers who stayed behind passed on some last-minute treats to accompany the orangutans during the journey. Like parents sending children off for college, they seemed reluctant to let the orangutans go.

The trip to the release site is a long and bumpy one. The orangutans held on tight to their respective companions throughout the journey, and caregivers rode with them in the backs of the trucks to ensure safety. When we arrived at the release station, several men were needed to haul the transport cages into the forest where the girls were to be released. After a long day of travel, milk and fruit were waiting for them on a feeding platform to help ease them into their first night in the wild. Kimba and Noni were released first, followed by Jade and Liana. Their behavior was consistent with their personalities back at the OCCQ. Kimba and Noni went straight for the feeding platform. Noni remained calmly on the platform for quite a while, feeding leisurely and observing her surroundings nonchalantly. Kimba filled her mouth with as much milk as she could and moved immediately into the trees, as if she thought someone might try to take the milk back if she lingered. Jade and Liana, who had always been happiest in the forest canopy, bypassed the feeding platform completely and went promptly into the surrounding trees.

In time all four orangutans were mingling in the trees together. They wrestled in the vines and shook up the trees, causing several large branches to fall to the forest floor. We were pleasantly surprised to see them forming new friendships. The four climbed through the trees feeding on leaves with orangutans who were not their normal sleeping roommates. Liana and Kimba especially took a liking to each other and climbed together for a long time. Hopefully, these new bonds will make the transition to the wild easier.

It was not until after dark that the four females stopped playing and foraging and instead began to build their sleeping nests high up in the trees. The caregivers who would be monitoring and taking notes on the orangutans’ progress over the next ten days stayed behind to make sure they knew where to look for the girls in the morning. When the ten days were up, permanent field staff would continue keeping track of the orangutans’ progress during supplemental feedings, as long as the orangutans chose to stay nearby.

It was late at night when we loaded back into the trucks to make the long drive back to the OCCQ. I gazed out of my window into the surrounding trees, happily thinking back over how each orangutan reacted to her new home, and feeling optimistic about their future. But as we made our way along the quiet, empty roads, every now and then our headlights would illuminate big yellow trucks filled high over the brim with fruits from palm oil plantations. Sometimes I counted up to seven palm oil trucks passing in a row. Seeing the trucks was a sobering reminder of the challenges we still face in orangutan conservation. As we fight to rehabilitate and release orangutans, rainforest continues to be destroyed to make room for palm oil plantations, pulp and paper plantations, and agricultural expansion. As rainforest disappears, more orangutans are killed or injured by the humans who encounter them, and more orphaned orangutans wind up in our care. This is why OFI works tirelessly to buy and protect forested land and why we work with companies to educate them on what do if they encounter wild orangutans. It is equally important, if not more so, for consumers to be aware of the impact they have when they do or do not choose to buy products linked to rainforest destruction.

When I think about all that Kimba, Noni, Jade, and Liana have been through on their journey back to the wild, and all the love that caregivers like Ibu Sumi have shown them over the years, I can only hope that these four girls will never have to face the traumas of their infancy all over again. I hope that they start their own families and live the rest of their lives on their own terms. I hope that the day never comes when there is no more forest for the release of ex-captive orangutans.

This is what OFI fights for, and every bit of support we receive helps orangutans directly.

Orangutan Of The Month: Anna with the Striking Eyes