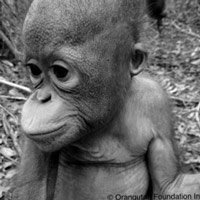 I cannot believe how much Satria has changed in the time that I have known him. His expressive face and hesitant curiosity made him stand out from the start. He was the type of infant that could be described as the “runt of the litter” because of his tiny size. He also seemed very fragile. This combination of fragility and small size always inspired my sympathy. However, in a short time Satria grew immensely, both in body and spirit. Today he is anything but fragile and tiny. His hijinks never fail to entertain. What used to be an orangutan among the most solemn of the solemn now spreads joy among the other infants in the Care Center as well as among the care givers.

When I first met Satria in October 2012, he was skinny and scarcely had any hair on his body. His saggy skin gave him a vulnerable appearance. For many orangutans at the Orangutan Care Center and Quarantine (OCCQ), regaining good health is not just a matter of receiving the proper nutrients and having plenty of time and freedom to exercise, but also involves their regaining emotional strength after the traumas that led them coming into our care. Some orangutans have a harder time than others, and Satria was one of those. We knew Satria needed to make emotional progress before he could make significant physical progress. Caregivers were diligent in giving him the extra attention and nurturing he needed to make this transition.

By the time December came, I still hadn’t noticed any change in Satria. Then I was away from the OCCQ for about a month, unable to see his progress. When I returned in the New Year I noticed one infant orangutan whom I did not recognize. He had thick, bright orange hair all over his body and hair that stood straight out, rather comically, on his head. For a small orangutan, he seemed to be very well built, with strong arms and legs. I wondered who this handsome new infant was. Upon getting closer to him I thought, No, surely this can’t be skinny little Satria!?But his caregivers verified his identity. It really was Satria!

In the space of a month Satria’s physical health caught up to his emotional health . He transformed from a skinny, wide-eyed infant into a confident, fuzzy little boy. Satria became an energizer bunny! His rambunctious personality had not changed, but rather was amplified by his newfound vigor.

Today, Satria is a dominant personality on the playground and in the forest. I love taking Satria out for “forest school,” because each day his excitement at getting to play with all his orangutan and human friends increases. He does not have a preference between the jungle gym and the forest surrounding it. He just likes to be wherever the action is. Well, maybe he likes to be wherever others are, and then he brings in the action.

Part of the action involves wrestling. None of the other infant orangutans love wrestling quite as much as Satria does. It doesn’t matter what your age or whether you’re human or orangutan, if you cross Satria’s path in the forest, you’re in for a fierce wrestling bout. Once Satria even tried to wrestle with a stray cat that had wandered into the Care Center forest. As soon as Satria grabbed the cat, the cat decided she was not cut out for orangutan forest school and ran away as fast as her legs could carry her.

Satria’s brand of wrestling displays much goofy histrionics. He will dramatically flail his body onto his caregivers, a tactic that is less strategic and more about putting on a show and having lighthearted fun than about intimidation. Sometimes when caregivers are sitting on the ground, Satria will throw his hands in the air, and then – as if in slow motion – allow his whole body to free-fall, seemingly without any concern whether he lands softly on his intended victim, or hard on the ground (which does happen occasionally).

Satria is even dramatic in the way he forages for food. Sometimes he moves hurriedly and deliberately in one direction as if he were on an important mission. After reaching his destination he will halt, linger for a moment, and just sit down to munch on a leaf. I suspect this sort of behavior is actually a ruse to give him time to plan his next wrestling trick. Indeed, even when he is calmly snacking on some leaves, he might launch an attack moments later. I have seen him charge while foraging with a big stick in his mouth, as if the stick gave him confidence.

I eventually noticed that Satria and his closest friends have a favorite meeting place. There is a thick clump of bushes with a little gap in the middle that provides just enough room for a small group of infant orangutans to play out of sight of everyone else. I have affectionately come to think of this spot as “the fort,” because it reminds me of a similar hideaway I had as a child. Satria is definitely the ringleader of the infants at the fort. As soon as he enters, two or three others follow suit. They sometimes stay in that fort for hours, either wrestling or sitting together and picking at the leaves around them. In these silent moments I always think of the schemes and make-believe worlds I concocted in my own childhood forts. I wonder if these infant orangutans are doing the same.

Because he loves so much being in the thick of things, Satria does not spend as much time as others foraging in the trees. Usually he wanders off to climb alone only if someone has upset him by not being an adequately enthusiastic wrestling partner. Luckily, his grudges never last long.

Satria will eventually have to take a liking to climbing and foraging on his own if he wants to develop the skills necessary to be a wild orangutan. But right now he is still several years away from a permanent release into the wild. Zeal and a competitive nature – two things Satria has in abundance – are also critical to the success of wild adult male orangutans. Those are traits that are difficult to teach. So for now, we’re more than happy to watch this boy be a boy, and delighted to be entertained by his constant antics.

When I watch Satria play, I smile thinking about how far he has come. His transformation is a testament to how effective the care of staff at the OCCQ can be. Every donation made to OFI helps us provide better care to the orangutans who need it the most. We are so grateful to those who make it easier for us to bring orphaned orangutan infants like Satria back into good health. It is the only way they can become the vivacious, energetic individuals they were born to be and get a second chance at a successful, happy life in the wild. Thank you so much for the support that allowed Satria to become healthy again.

Orangutan of the Month: Mohtar