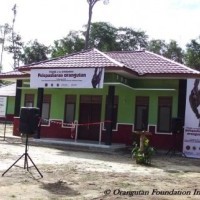 On December 11, 2012 about one hundred people gathered at an isolated Orangutan Foundation International (OFI) forest camp at the edge of Tanjung Puting National Park in the province of Kalimantan Tengah (Central Indonesian Borneo) to release five wild born ex-captive adolescent male orangutans into the wild. The release occurred under the auspices of the “Friends of Orangutans” program initiated by OFI and P.T. Smart, an Indonesian company concerned with conservation.

Ten OFI rangers, in sets of two, made an attempt to follow and observe each released orangutan for ten days in order to ensure that the orangutans made a successful adaptation to the wild. Ziko, Jumadi, Russell, and Jusman stayed close to the feeding station after release while Peregi came to the ground and wouldn’t let the two OFI rangers observing him get close. As soon as they moved closer, he would run south as fast as his legs would carry him. Ziko, Jumadi, and Russell play fought and wrestled in the canopy, clearly enjoying their new found freedom after a month in pre-release quarantine. They seemed somewhat confused, but exuberant, clearly understanding that this was different from the day releases they had experienced at the Orangutan Care Center and Quarantine when they were brought back to their sleeping cages late afternoon. In the words of one observer, “Everyone was excited!” I think it also included the people watching the release. The joy and excitement of release was contagious.

But release into the wild also has its pitfalls as Russell, who had moved off by himself, soon discovered. He encountered a large wild flanged (cheek-padded) male. Russell fled in the trees, seemingly fleeing for his life, as soon as he saw the male. Shortly afterwards, the male long-called, probably scaring Russell even more.

Over the next few days Jusman disappeared into the swamps, eluding his OFI observers. The other four released orangutans came to most of the feedings at the second feeding station, about 500 meters from the first station where they were initially released. They each made night nests in the general vicinity of the camp.

It’s been exactly two months as I write this since the five wild born adolescent male orangutans returned to the forest. All five “releasees” are in good shape. Only Jusman, who disappeared for a few weeks, seemed to have had somewhat of a bad adventure. He was located in the palm oil plantation looking a bit thin and disoriented. But after attending feedings consistently for a short while, he recovered and looks healthy again.