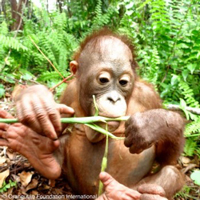 In many ways, Rangda (pronounced “wrong-duh”) is much like the rest of the infant orangutans at OFI’s Orangutan Care Center and Quarantine (OCCQ); he loves climbing trees, playing with his friends, and eating fruit. But within these preferences, Rangda finds little ways to break the norms of behavior. His unique climbing habits and particular affinity for mud are just a few of the ways he makes himself stand out. There is a noticeable contrast between Rangda’s behaviors when he is exploring on the ground as compared to when he is climbing in the trees. On the forest floor, Rangda’s movements are quite delicate. He walks slowly and deliberately, and when he finds a leaf or flower to eat, he pulls it apart very carefully. But when Rangda is high up in the trees – where acting rashly could result in serious consequences – he throws caution to the wind! Even when I can’t actually see Rangda, I can hear branches cracking and leaves tearing from his general direction. One of his favorite maneuvers is to climb high to the tops of thin, dead, branchless tree s, where he can build up the momentum to swing the whole tree into a neighboring tree. But while some of his friends can pull off this trick gracefully by sweeping the thin trees around in broad circles, Rangda’s method involves a lot of erratic flailing. He throws an arm out clumsily in one direction, which usually sways the tree just enough for him to grab on to the ends of the leaves in a neighboring tree, but not much further. Often his technique is so poor that he never succeeds in transferring to another tree, but perhaps that is not even his intent. Rangda’s funny way of climbing may just be an expression of his carefree nature. He can wait until he gets older to be concerned about more practical pursuits (like finding fruit) while he is in the trees.

Rangda’s climbing is made even more complicated by his tendency to multitask. Instead of resting for a moment when he finds a nice bunch of edibles, he stuffs it all in his mouth – whether it’s little green seeds or whole pineapple halves – and munches on it as he climbs along. Rangda also prefers to play with his friends up in the trees rather than on the ground, where wrestling would be less risky. His favorite climbing buddy is Voyce, and the two can often be seen tangled up in a mass of vines, wrestling and playfully biting each other. I once saw Rangda get pushed out of the vines during one of these wrestling bouts. He crashed down into a heap of sticks on the forest floor, lay there for a moment (perhaps regaining his pride), and scrambled right back up the vines to continue the game!

Many of the young orangutans enjoy playing in little pools of muddy water that they happen across on the forest floor, but none love it quite so much as Rangda. Sometimes Rangda displays his normal ground-dwelling delicacy when he investigates a puddle. If he just wants a drink of the water, he will spread all four limbs out wide along the edge of the pool, balancing along its border, and then stick his face way out until he can just barely stick his lips into the water. But other times Rangda forgets about any desire to stay clean. I once watched as he sat beside a muddy pool, doing what I can only describe as making “mud soup.” He tore leaves off of the surrounding vegetation to throw into the pool and splashed it around with his hands. He then added some twigs and took a sip of his muddy concoction, just like a chef test-tasting a meal. Apparently dissatisfied, Rangda threw in more leaves, blew some bubbles in the water, stamped around in it with his feet, and then took another sip. Sometimes he would make his additions or stamp through his soup at a leisurely pace, and other times he did so quite vigorously. He kept with this activity for a good twenty minutes, displaying more dedication to one task than you usually see in orangutans his age or older! In the end, he seemed to decide that no matter what you add to it and how you mix it, muddy water just does not taste good. Rangda is not one of the more attention-seeking orangutans at the OCCQ, but if you make a deliberate effort to spend time with him, you can quickly pick up on his unique antics and characteristics. When you do, you find that he is quite a special little orangutan, full of endearing quirks! Orangutan of the Month: Goran

Orangutan of the Month: Maxine