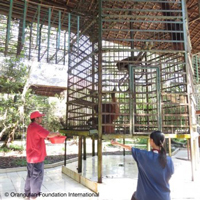 Orangutan Foundation International (OFI) is constantly addressing unforeseen problems, which come with any wildlife conservation efforts. Habitat destruction, poaching, illegal pet trade, wildfires, and corporate exploitation are all problems that take an immense amount of effort to address. When it comes to orangutan rehabilitation, the focus of our work at the Orangutan Care Center and Quarantine (OCCQ) in Borneo, there are ‘housekeeping’ challenges that frequently make life hard. We recently faced one such challenge when it came time to move two adult males, Boncel and Josmik, into a new enclosure. When working with large captive animals, even the most basic procedures take a lot of preparation, expertise, and effort.

Boncel and Josmik’s move was necessitated by the condition of their old enclosure. When the Orangutan Care Center and Quarantine (OCCQ) was first built, we only anticipated caring for infant and juvenile orangutans, and far fewer orangutans than we care for today. Yet because it is difficult to find forest release sites, and because many adult orangutans are brought to us in poor physical and emotional condition, we now care for a number of fully-grown, incredibly strong orangutans.

These individuals live in enclosures made out of iron rather than wood, because of iron’s great strength. But over a decade of use in the humid tropical conditions has caused the enclosures to deteriorate and rust. This makes moving around the enclosure more difficult for the orangutans and easier for them to break out of the cages and escape. Without a doubt, these enclosures are not meant to be permanent homes. We hope one day to release or translocate every orangutan in our care. However, for an orangutan to escape his/her enclosure preemptively would be potentially hazardous not only for that orangutan, but also for the humans at the OCCQ.

Thus, over the past several months we have raised the money necessary to rebuild these old enclosures, and then to move the orangutans living there into new ones. The new enclosures are built out of galvanized steel, which will prevent rusting and will hold up much better than the old iron ones. These steel enclosures are ideal for the biggest and strongest orangutans, and allow for more freedom of movement. When the basic construction is finished, staff and volunteers build and install permanent enrichment – like platforms, barrel hammocks, and tire ladders – so that the orangutans have plenty of opportunities to exercise and relax. Once these features are in place, the enclosure is ready for its new occupants.

Boncel and Josmik are two male orangutans who urgently needed a home renovation. On the day of their big move, our team of staff bustled around in preparation. Because of their massive size and strength, but also because this was a rare opportunity for the veterinarians to do a basic health check, both Boncel and Josmik were tranquilized for the move. After consulting the males’ health records, the veterinarians prepared tranquilizer and brought a scale out to the transfer location. Caretakers prepared fruit and other treats to calm the orangutans and help the transfer run as smoothly as possible.

After caretakers coaxed Boncel and Josmik down to the floor of their enclosure with fruit, it was time for them to be tranquilized. Staff members used a traditional Dayak method: blow darting. Two staff members who are skilled in this procedure waited until Boncel and Josmik were calm and on the floor of the enclosure to shoot the darts. They hit their targets with no problems, and we waited for the tranquilizer to take its effect.

Josmik was the first to be darted and to go under. Josmik and Boncel have been friends for a long time, and have lived together for the better part of ten years. Boncel has full cheekpads while Josmik is smaller and hasn’t yet fully developed flanges. So naturally, Boncel was concerned when he saw that Josmik was unresponsive, and he went to Josmik’s side and began to shake him. This was a scary and troubling moment for all of the onlookers. We were sorry that Boncel had to go through this stress, and worried that Josmik might be hurt in Boncel’s attempts to revive him. Caregivers did what they could to distract Boncel, and soon enough he passed out as well. Neither orangutan was hurt, but this type of situation highlights how difficult it is to work with adult captive orangutans, even when all precautions are taken.

As soon as we were sure that both Boncel and Josmik were anesthetized , staff moved very quickly to get the transfer done before either of them awoke. Several strong men worked together to remove the orangutans one at a time from the enclosure. The orangutans were then carefully hoisted onto the back of one man, who stood them on a scale so the veterinarians could calculate the orangutan’s weight. Then they were placed in comfortable recovery positions on the floor of their new enclosure. This entire process was completed in just a few short minutes!

While they were still under anesthetic, veterinarians did some last checks on the orangutans’ health. Caregivers prepared plenty of fruit, branches, and liquids for Boncel and Josmik once they awoke. Within an hour, both orangutans were awake, but quite drowsy. A caregiver remained near the enclosure throughout the rest of the day to monitor Boncel and Josmik as they regained energy and began to eat and explore their new enclosure. By the next day, the two were back to normal, eating heartily and enjoying their new home wirh its enrichment!

Many of the larger-scale problems orangutans face, like deforestation and poaching, are so complex that there are rarely clear answers on how to even begin addressing them. But for many of the challenges of orangutan care at the OCCQ, we have a clear roadmap on how to improve conditions, as long as we can acquire enough funds to carry out our plans.

Over the next several months we hope to rebuild the remaining old iron enclosures and move many orangutans into more secure ones. While we have all of the desire and skill available to make this happen, we do not yet have funds in place: each new enclosure built of galvanized steel costs approximately ten thousand US dollars.

We thank our German sister organization “Orangutans in Peril” for funding the new galvanized steel cage for Boncel and Josmik.

In this season of giving, please consider making a donation to OFI so that we might continue to build newer, safer homes for the orangutans in our care. These enclosures help ensure that the orangutans will develop into individuals who will one day be prepared to return permanently to the wild. To those donors who have enabled the building of new enclosures over the past year, please accept our tremendous gratitude on Boncel and Josmik’s, as well as many other orangutans’ behalf.

Orangutan of the Month: Victor