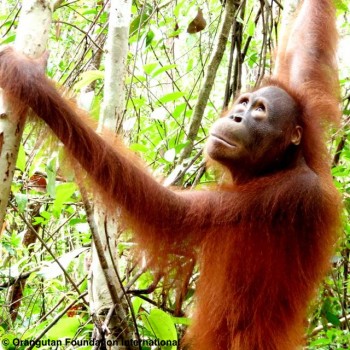 Throwing a huge leaf over her head with a comical flourish, Uci (pronounced ‘oochi’) follows along with the group of adolescent female orangutans making their way across the forest floor. Displaying youthful fearlessness, they tramp through the deep puddles of water formed by last night’s heavy rains. Emerging onto drier ground, Uci loses her leafy hat as she somersaults her way up to a tree and begins the day’s first ascent: just a typical day for a spirited young orangutan at the Orangutan Care Center and Quarantine (OCCQ).

Uci is at a maturity level comparable to a human teenager, a comparison made all the more obvious by the way she interacts with other orangutans. In the wild, orangutans of this age typically begin to leave their mother’s side to spend their days alone or – especially for females – in the company of other adolescent orangutans. Just like many human females of the same maturity, Uci enjoys traveling in the company of friends, but she is not cliquey or picky about her companions. She munches on leaves with Gabel, braves little swamps with Berman, sits dozens of meters up in the trees – just relaxing and enjoying the view – with Mercedes, or playfully crashes through vines and branches with Xena. Uci just loves to interact with her peers! 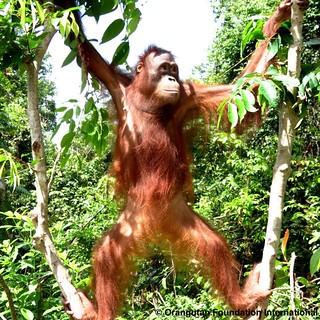 On several occasions Uci has provided interesting examples of orangutan intelligence. Of all the great apes (which includes orangutans, gorillas, chimpanzees,and bonobos), intelligence has been least studied in orangutans. Unlike their well-studied chimpanzee cousins, there are very few recorded instances of orangutans making and using tools (e.g. rocks to crack nuts or sticks to probe holes for termites) in the wild. Therefore, every instance of observed tool use in orangutans is notable. One day, while out in the forest with a caregiver, Uci discovered a termite nest and stopped on the forest floor to forage for some extra protein. After breaking up the semi-underground nest, she gathered up the termites with her hand and feverishly licked them off her fingers. Wondering if she might prefer a method with less direct contact, her caregiver picked up a stick, stuck it into the ant nest, and then brought it to Uci’s face so she could lick off the ants. After repeating this a few times, Uci seemed to catch on to the method, so her caregiver handed the stick to her. After contemplating the stick for a moment, she took a munch out of it and moved on!

Several weeks later, Uci was seen picking something out of a small hollow in a tree and then licking it off her fingers. She paused from this activity to yank a small fern branch off a neighboring tree, and  returned to the original tree to jab the fern branch into the hole. Unfortunately, she was not persistent enough to have much success, and soon stuck the empty fern in her mouth and climbed away. It seems that Uci will have to be a champion for her species’ tool-using some other day!

Uci is skilled in many ways. She is a calm, adept climber and spends the majority of her forest time in the tree canopy. She is fond of straddling two nearby trees or vines to survey the forest before her. As she travels with her friends, she takes her time to sample every fruit, seed, and leaf that they pass by. Indeed, Uci’s caregivers joke that all she likes to do is eat! And she can be very cunning in the way she obtains food. She will snatch the fruit of others – and even caregivers’ water bottles – away from them with such speed that the victims need a few moments to process what happened to them. But these theft episodes are uncommon, and Uci really is quite competent in finding her own food and building her own sleeping nests. She is gentle with her caregivers, but seeks out their attention infrequently. For an orangutan her age, this is a good sign. In the wild, she would also be becoming independent around this time.

With so much forest aptitude, we hope that Uci can make a permanent return to her forest home one day soon!

Orangutan of the Month: Mr Bernie

Orangutan of the month April 2020
LORI BELLE: Quiet and Reflective