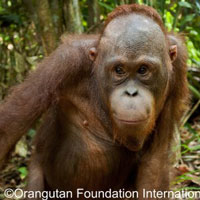 Dewa is a now a nine year old male orangutan who stole my heart on my very first day of volunteering in 2012 at OFI’s Orangutan Care Centre and Quarantine in Pasir Panjang, Kalimantan Tengah, Indonesia. In just one week Dewa and I became special friends. It has been such a delight getting to spend time with him that I would like to share his story. This is just one story. There are others like it at the Orangutan Care Center. It is not uncommon for orangutans, especially younger ones, to feel stressed or anxious when they live as orphans in captivity. Captivity is not their natural state. They miss their mothers who were killed when their offspring were abducted. As a result of captivity and the trauma they have been through, young orangutans sometimes suffer from depression. When the staff notice changes in orangutan health or behavior, this is taken seriously. Depression, especially, is always taken seriously. There are dedicated staff members as well as volunteers to help our charges recover with extra care, additional types of food, and daily release time in the forest. With special love and attention a depressed orangutan’s physical and mental health can improve.

Back in August 2012 Dewa appeared to be experiencing symptoms of depression. He was losing weight and most of his hair. His skin looked really dehydrated. Dewa would lie on his back with his arm over his eyes, hiding from the world. He would ignore most the food he was given and would barely move around in his sleeping enclosure. It was very difficult for me to witness his sadness, and I felt determined to help bring his vitality back.

From that day on I started spending personalized time with Dewa. A strategy recommended by OCCQ director and founder Dr Biruté Mary Galdikas (a true orangutan “whisperer”) which had worked for other depressed orangutans was simply consistent physical and emotional affection. Sometimes just rubbing an orangutan’s arm and/or holding his/her hand and talking to him/her was very helpful, especially if it was consistent over time. I started arriving at the Orangutan Care Center and Quarantine (OCCQ) early to spend time with Dewa and give him special attention. Together with Ibu Tuti (a dedicated local staff member who is also a bit like an orangutan whisperer) we would give him his daily vitamin/electrolyte drink and sweet milk. Soon Dewa began to look forward to these treats. When he knew they were coming he would stand up and make an excitable squeaking noise and guzzled everything as fast as he could. Both Ibu Tuti and I would also stop by to see him during the day with extra food, treats, and more attention. Dewa quickly learned that when I visited I usually had something special for him. Standing up with a sparkle in his eye, his arms reaching out while making his special squeaking sound, he would search my pockets himself if I didn’t offer his treat right away. He had started to get cheeky, which was absolutely brilliant! He also started to give me facials. In the ancient primate social grooming tradition, he would inspect my face for pimples, spots, freckles or anything that he could squeeze very gently. Once satisfied with the grooming, Dewa would spend as much time as I allowed him massaging my head and face. Honestly, this was a delight. Although juvenile male orangutans of Dewa’s age are very strong, I had and still have complete trust in him and his gentle nature.

Every few days over the course of the five months I volunteered at the OCCQ in 2012, I took Dewa out of his enclosure to give him a mandi (wash). Most of the orangutans don’t really like to be bathed but Dewa climbed right up on my back and happily went with me. It usually ended up that we both got a wash because Dewa insisted on holding the water hose by himself, guzzling the water and, of course, eating the shampoo. While having all this watery fun, he continuously held my hand for comfort. After a towel dry, Dewa would climb right back onto my back and we would go enjoy some sun. He would happily sit with his hand on my knee and eat home-made mung bean and coconut porridge while I massaged baby oil into his skin. These days were and still are a real treat for the both of us.

Dewa often goes out to “forest school”with staff members here at the OCCQ. Sometimes I am lucky enough to join them. I spend time watching Dewa enjoy his freedom, climbing through the trees and foraging for wild fruit which he does with great enthusiasm…this boy’s appetite sure did return! Sometimes when I am out there with him, Dewa comes down from the trees and takes a rest, sitting next to me for a while, holding my hand. But sometimes, he goes off into impassable parts of the ‘rehabilitation forest’ and you need to keep your eyes on him in order not to lose him. I once had the bright idea of taking my hammock out to the forest to relax in while I watched Dewa and his friend Victor climb and play. A bad idea indeed! Both boys were not interested in the forest at all that day and insisted on enjoying the hammock with me. Although it was hilarious to see them lounging in it with smug expressions on their faces, I packed it up. Only once it was back safely in my backpack did they decide it was time to climb the trees. At the OCCQ we are trying to build larger night enclosures as fast we can physically construct and fund them. Each enclosure with enrichment is four to five thousand US dollars. We are always trying to improve the living conditions for all orangutans at the OCCQ so that between their time out at forest school when they are in their sleeping cages, they can remain active and stimulated. Dewa was one of the first juvenile orangutans to move into a new night enclosure. AND he got two new friends, Ari and Sadam who moved in with him. In the sleeping enclosure they have a bridge, a swing, and some hammocks to make leafy nests in for sleeping. During the day the enrichment officer, Ibu Maryanti, brings them special materials such as wooden items with embedded nuts and seeds to keep the orangutans occupied when they are not in the forest. In the late afternoon the assistants provide leafy branches which the orangutans can use as nesting material for their night nests in the sleeping enclosures. The first day Dewa moved into his new enclosure was special! He came in and immediately walked up and down the bridge, exploring, with eyes sparkling in anticipation, and then climbed into his hammock for a swing. This is still where he usually spends his time when in his sleeping enclosure. It is a real joy to watch Dewa and many of the orangutans at the OCCQ enjoying their new sleeping enclosures. We sincerely hope that with more donations and funding, all of the orangutans in our care who need these special sleeping enclosures will be able to soon enjoy them.

Although Dewa’s behavior changed dramatically with one month of receiving extra attention, it took longer to notice the physical changes. After about three months I started to notice his hair returning and his skin looking much less like it belonged to a two hundred year old person! After spending almost five months volunteering I returned to Australia. When I left I realized that Dewa had developed into a strong, gentle but determined young orangutan who had not only lovely hair growing back but had filled out with healthy flesh on his bones. Dewa really had come a long way. I knew that he was in great hands with Ibu Tuti and other staff and volunteers continuing to give him special attention. I was lucky enough to return to the OCCQ in March this year. One of the first things I did was visit Dewa, who grabbed and held my hand immediately. I recognized him instantly because of his sparkly eyes but it was difficult to believe my own! His hair had grown out and he now has a bowl-like hairstyle on his head. His skin is strong and supple. He no longer mopes in his enclosure and looks bright and healthy. Every day I visit Dewa just to spend time with this gorgeous creature, and as he holds my hand or massages my head I think of how far this guy has come. I also sometimes think that without the existence of the OCCQ which took him in after his mother was killed, he would not even have survived. It fills my heart with happiness to see him happy and well and to realize that, once the time comes, he will be able to return to the wild.