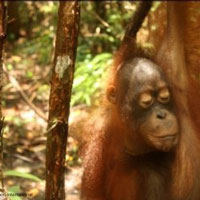 This is my last Orangutan of the Month as I am leaving Borneo in a matter of days, so I wanted to pick an orangutan that I’ve bonded with throughout my six months at the OFI Care Center. I first came across Berman when I gave her an extra daily meal of “bubur”(porridge) made from mung beans in order to help her gain weight. Berman had been in the veterinary clinic for some time since her weight would not budge. But she has started to rapidly gain weight in recent months. She is always very friendly and often reaches out to hold my hand. She even found a deeply embedded splinter which had been in my hand for over four months and tried to squeeze it out! It eventually came to the surface; Berman was not only friendly, but also very useful to know!

Soon I started visiting her regularly, and would give her little hand massages to help her relax since she always looked as if she was worrying about something. Her chin would wobble, and she would squeal anxiously. She seemed to like the massages I gave her and began patting my hand as if she was trying to return the favor.

Berman is regularly taken out into the forest by a group of local caregivers but since there are over fifty orangutans in the clinic, the orangutans often have to wait a day or two before it is their turn to be released. Another experienced local caregiver, Mr Henson, and I wanted to release Berman more often so that she visited the forest more regularly in order to help with the anxiety she seemed to be experiencing. Initially she would sometimes slump on the bottom of her sleeping enclosure and refuse to get up. One of the sick orangutans in the enclosure adjacent to her, Edong, had just died, so it is likely that Berman was experiencing emotional trauma at the time.

The first time we released her, she headed straight to one of the forest camps called “Pondok Padang Satu.” We trekked behind her through the swampy forest. Eventually she reached the camp, and scrambled towards a water basin. Yet instead of drinking from it, she decided she wanted to climb in and managed to sink both feet in the water before we hooked her out. Feeling rather embarrassed, Mr Henson and I took her back to her sleeping enclosure and decided that if we released her again, we should take her to another area of forest, away from the facilities.

Berman is a fussy eater, which may explain her weight-loss. Often, if she is unhappy with her meal, she will throw it out of her cage in a dramatic fashion. Ripe bananas are often flung out or poked into the enrichment ball she is given to play with. However, rather annoyingly, she seems to enjoy eating the plants that our horticulturist Pak Majid is growing in his garden, near the clinic. Every time we release her, we have to pull Berman away from Pak Majid’s luscious cassava and chili plants. We were concerned the first time Berman took one of his very hot chilies and earnestly shoved it into her mouth. Yet, surprisingly, she seemed to like it and tried to grab more before we steered her away.

Food time with Berman often descends into play. On one occasion, after I gave her some porridge, I gave her the bowl to lick. After she had completely licked it dry, she began banging the bowl against the slats of her enclosure. Then, holding it upright, and putting all her bananas inside, she shook it up and down to bounce the bananas.

Berman seems to be very creative, and gets bored easily; therefore enrichment and exploring the forest are important activities for her. I once brought my pad and pen to write an article beneath her enclosure. She promptly took the two items, and began making squiggles on the pad. Yet again, she quickly grew bored, bit on the pen, and was soon covered in black ink all over her arms and hands. Dr Popo was passing through the clinic at that exact moment and since I was so embarrassed about what had happened I stood in front of Berman’s cage to block the ink-stained orangutan from view. After a quick, soapy shower the ink was off and no-one was none the wiser about the incident.

When Camp Leakey ranger, Mr Iim came to Pasir Panjang, I asked him if he could release Berman into the forest and teach her some forest skills. Mr Iim promptly climbed into the trees and Berman eagerly joined him. However, on this particular occasion, Mr Iim had his work cut outfor him. When Berman decided she didn’t want to go home to her sleeping cage, she climbed the fruit trees near her cage and stayed there for a good hour. We waited beneath the tree and tried to tempt her down with some peanuts with little success. Eventually she cheekily ventured along some branches towards the roof of the veterinary clinic. Soon she had climbed on top of the building and had completely disappeared from sight. Mr Iim climbed a nearby tree and heaved himself onto the roof. He eventually found her quietly sitting in the trees, observing the world beneath her. After taking her by the hand, he led her down the tree. She climbed into my arms, holding me tight, almost as if she was apologizing for disappearing.

This past month, Berman has behaved like a different orangutan. She has become more assertive with her opinions and seems more confident about expressing herself. She would often tap our arms or legs firmly if she ever needed something. When in her enclosure, she can often be seen swinging, full of energy. She has also rapidly gained weight. In just four months, Berman has gained 8.8 pounds (four kilos), her belly is rounder, and her personality is growing bigger. Soon I hope she will be ready to leave the veterinary clinic and return back to “ forest school” to learn the important skills required for release back to the wild.