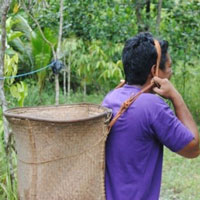 The Dayak village of Pasir Panjang in Central Borneo is a hubbub of activity. If villagers aren’t working formal jobs, they will often be tending to chickens, growing vegetables in their back garden, or looking for wild fruits in the surrounding forest. Mr Henson, who works at the OFI Care Center and Quarantine in Pasir Panjang, is no exception. Every day after work, Mr Henson drives to his little chicken farm to feed and clean approximately 300 chickens. Carrying a lanjung packed with cassava roots on his back (lanjung is the Dayak name for a basket carried around the head with a rope), Mr Henson certainly looks the part of a Dayak horticulturist as he heads towards a quaint, wooden enclosure which houses his ayam kampong, or village chickens. We head inside. The verdant enclosure is rich with palms, buckling cempedak (a type of jackfruit) trees, and pineapple plants, bursting with fat fruits. Mr Henson wastes little time, and calls the chickens with a soft cooing sound, before cutting the cassava roots with a parang (the Dayak version of a machete). Tiny flecks of white cassava spray into the air and as they hit the ground, the chickens flock at high speed to peck the food and each other. Cassava is useful in chicken farming; even the enclosure is made from wood of the cassava tree.

We leave the idyllic enclosure to visit Mr. Hensen’s pineapple field but my attention is suddenly drawn by a pack of growling dogs that seem unsure about my presence at the farm. One in particular gets very close and snarls menacingly. I use my bag as a shield around my legs and the dog eventually leaves after Mr Henson issues some warnings. Yet these dogs are important for a farm. The enclosure for Mr Henson’s village chickens doesn’t have a roof and there are many snakes and musang (civet cats) in the surrounding forest. The dogs provide protection against these chicken predators, as well as against any person with dishonest intentions. As we walk towards the pineapples, we pass chicken manure, drying in the sun. It is an old tradition to dry the manure in order to remove any bad odors; it is then stored in sacks and sold for around 20,000 IDR per sack. The manure is sold to people who use it to fertilize their vegetable gardens.

When we eventually reach the pineapple field, I’m surprised; it wasn’t what I expected. Instead of being a mono-cultural, non-diverse plantation, it’s full of life. Tall trees tower over the pineapple plants, shrubs grow in between. The air buzzes with insects and life. This is how farming should be. Embracing the native wildlife and plants, rather than trying to control or eradicate them. Mr Henson and his family never use pesticides on their produce; they believe that insects are an important part of the agricultural process for pollination. Mr Henson does admit that there are also plenty of “bad” insects which can eat his plants. From time to time, any foliage surrounding the pineapples will be cut back by Mr Henson’s father, Pak Awak, to allow more light to reach the plants. Ripe pineapples are usually collected once a week and large ones can sell for 5,000 IDR, smaller ones for 3,000 IDR.

As we leave, Mr Henson remembers that he needs to check his corn field. We pass through a small area of forest which is being logged by the people who own this stretch of land. Deforestation is the source of many conflicts between people and nature. As Kalimantan’s population increases, there is insurmountable pressure to convert forested land to agricultural land, plantations, or perhaps to clear space in which to build houses. Mr Henson explains that the trees cut down here will probably be sold as plywood for construction. Often the land is logged and the wood is sold before crops such as palm oil are grown. Sadly, palm oil is a growing presence in Pasir Panjang, as small, private plantations are beginning to appear around the village. Another common way of clearing the land is slash and burn, by using fire to burn down the foliage; sometimes the charcoal will then be collected and sold. Many palm oil companies have been accused of using this method to illegally clear land. We finally arrive at Mr Henson’s corn field. Corn (jagung in Indonesian and Dayak) can reach 3,500 IDR for one kilo. The corn is also considered a good chicken feed.

This day has been an interesting and informative one. I feel as if I’ve delved into a hidden world, a secret garden, full of food. This small-scale, farming lifestyle seems idyllic; however, it requires dedication and hard work. Yet there is something very appealing about producing your own food and then eating outdoors. For the local Dayak people of Pasir Panjang, small-scale farming is a way to improve their standard of living, to enrich their diets, and to provide tranquility. It gets people outside, into nature. In many small farms, like Mr Henson’s, nature and farming seem to go hand-in-hand.