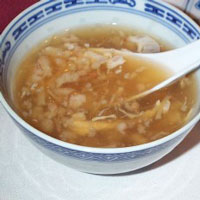 Bird’s nest soup is a Chinese delicacy that has been consumed for thousands of years dating back to the Tang Dynasty (618 – 907).   Bird nests, believed to have medicinal properties, were collected from cliff-side caverns to use as an ingredient for soup, tonics, and other elixirs.  Because the collection of nests was a difficult and dangerous process, birds nest products were only attainable by the Emperor and his family.  From the Tang Dynasty to present day, bird’s nest soup is one of the most sought after Chinese delicacies.  Today, the bird nest farming industry is booming; nowhere more so than in Indonesia.

The “bird” in bird’s nest soup is the swiftlet.  There are around 30 species of swiftlets in the world with only a few species from the genus Aerodramus producing nests suitable for human consumption as well as commercial production.  Of these few species, two are most common in the industry: the White-nest swiftlet (Aerodramus fuciphagus) and the Black-nest swiftlet (Aerodramus maximus).  These swiftlets are found in tropical and sub-tropical regions of southern continental Asia, Indonesia, Malaysia, Thailand, Vietnam, and Myanmar.  Indonesia is the largest producer of White-nest swiftlet nests in the world.  The nests produced in Indonesia do not remain in the country; the majority are exported to Hong Kong and the remainder to the United States of America.

There are a few reasons why the swiftlet nest has been considered such a delicacy for over a thousand years.  Much like shark-fin soup, bird’s nest soup has become more of a tradition than an enjoyable meal.  The only ingredients are the nests, sugar, and water resulting in a sweet, gelatinous concoction that is an acquired taste.  Traditional Chinese medicine considers swiftlet nests to have many healing properties.  It is prescribed to slow the ageing process; sooth the lungs; relieve phlegm and coughs; improve digestion; alleviate asthma; and to increase immunity, concentration, and libido.  When used as a topical treatment, it is believed to smooth wrinkles, repair damaged skin, and maintain skin tone.

Prior to modern farming techniques, the swiftlet nests were so rare that only the very rich were able to indulge in them.  For this reason, swiftlet nest products became a symbol of status and the price has remained very high throughout history, the present day being no exception.  Although the majority of the world’s swiftlet nest products are now made from farmed nests, the price remains very high.  One bowl of soup can cost as much as $100 USD and one kilogram of dried nest can run as high as $2000 USD.  The increase in international demand, coupled with the high cost, has made swiftlet nest farming a very competitive industry.  Swiftlet farming produces 0.5 percent of Indonesia’s annual revenue.

Modern day swiftlet nest farming is really quite simple.  Farmers build large, concrete bird houses the size of warehouses or large barns.  These giant bird houses contain small holes from top to bottom and on all sides where the swiftlets can come in and leave.  They are lured to the houses by audio recordings of swiftlet songs.  If the birds deem the conditions to be suitable, they will build their nests in the shape of shallow cups against the walls.  Nests are built throughout a very long breeding season of nine months beginning in August and ending in April.  The nests are built cooperatively between breeding pairs and take about 35 days to complete.  Nests are composed of interwoven strands of saliva which are cemented to the wall.  Swiftlets utilize a multi-brooding reproductive strategy; they try to reproduce as often as they can throughout the breeding season.  This reproductive strategy allows for the collection of multiple nests from the same individuals without interfering with the development of the young birds.  After the nests are harvested, they are cleaned and packaged for export.

Swiftlets have a high energy requirement.  They are almost always in flight and moult during breeding season.  Their diet consists entirely of insects.  The swiftlets will only live and breed in areas that contain abundant forest habitat where many insects thrive.  If a bird house is constructed in an area that is not near forest habitat or near an adequate food source, the swiftlets will not breed there.  Additionally, if the conditions within the house are less than desirable (dirty, small space, poor air circulation, etc.), the swiftlets will seek out a more suitable breeding site.  The swiftlets have complete control of where they breed, how often they breed, or if they breed at all.  Swiftlet offspring are encouraged to grow to adulthood by human managers as the young birds are needed to continue nest production in the future.  These characteristics suggest that this industry is potentially sustainable with proper regulation and forest preservation.  Because these nests are in such high demand, there is the possibility that this industry could replace illegal logging and other destructive practices in Borneo.  Not only is this a lucrative business opportunity for bird house owners and producers, the industry has expanded to include industry-specific consultants, contractors, hardware suppliers, transport companies, and job opportunities for locals within communities.

Swiftlet farming in Borneo appears to be a sustainable and environmentally sound industry.   Creating jobs and reducing the rate at which forests are destroyed is an added bonus.  Many of these farms are located within city limits – much to the chagrin of neighbours trying to get a peaceful night’s sleep.  However, the loud noise pollution produced by the birds could be a deterrent to building farms within city-limits in the future.  Moving bird farms outside of cities can also help support the need for forest protection.  If the birds are happy, the people are happy, the forest is happy, the orangutans are happy too.