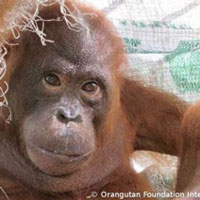 Maxine is one of the most clever orangutans I have met at the Orangutan Care Centre and Quarantine (OCCQ). One would guess that her favourite enrichment item would be a complex puzzle feeder or an intricately wrapped parcel of leaves but Maxine prefers a simple burlap sack. While other orangutans often rip apart burlap sacks, Maxine keeps hers completely intact and makes sure that nothing happens to it for weeks! She sits on it, puts it over her head, tries to reach things with it, even spins and swings from it. She often cuddles up with it when she is sleeping; I guess we all need a security blanket sometimes.

Maxine is approximately 9 years old. She was first introduced to OFI when she arrived at the age of five. She was brought to the OCCQ by the Indonesian Forestry Department from western Borneo. She has no official history but definately has a story – she is the only one who knows it. Maxine is classified into the “failure to thrive” category; she is small with low body mass. She is a good eater, albeit very picky, but seems unable to put on weight. There is no medical reason to explain this as she is an otherwise healthy orangutan. Too often the stress and trauma of an orangutan’s past can lead to poor eating habits and/or the inability to grow at the expected rate. Maxine is on a special feeding regime to provide her with more calories. This regime consists of a variety of local fruits plus an additional portion of porridge made from mung beans, red rice, milk and pumpkin. Although she loves her porridge, she is still struggling to put on weight.

One of the things I find most interesting about Maxine is her trading behavior. Making trades, or bartering, is a characteristic of some primates. An example is social grooming most commonly displayed by social apes like chimpanzees; you scratch my back and I will scratch yours. Orangutans are solitary animals where grooming is usually only seen between mother and offspring. However, orangutans are known to make trades with other orangutans for fruit and other objects. Maxine will offer her highly coveted burlap sack in exchange for bright red hibiscus flowers. How do we know she is trying to make a trade? She will push the sack into her caregiver’s hand and either point or push her caregiver in the direction of the hibiscus tree. Those hibiscus flowers must be very tasty in order for Maxine to part with her beloved sack. Don’t worry, she always gets the sack back.

Maxine is a great problem solver. After receiving a rice ball as part of her special feeding regime, she found that it was a little too warm for her liking. She wrapped the rice ball in a leaf to handle more comfortably. She then blew on the rice ball to cool it further before eating. She ate a little bit and then blew on it again! I am unsure if Maxine has ever seen humans do this before but even if she has, her ability to learn a new behavior and to remember it is quite remarkable. The ability to learn from cultural situations is a trait of animal species with higher intelligence. Some animals are born with all the knowledge they will need in the form of instincts. Some animals can only learn from their mothers. Primates, along with many other species, have the ability to learn from peers. This trait played a major role in primate and human evolution.

There is nothing that Maxine would rather be doing than exploring the forest. She will play near her caregiver for a few minutes before heading deep into the trees where she can no longer be seen. She always goes to the same spot in the forest; she is looking for ants. Orangutans mainly eat fruit but supplement their diet with insects for protein. She doesn’t mind when the ants resist by crawling on her and biting her. Maxine will remain in her special place for hours where she cannot be seen or heard. Maxine’s caregiver calls to her every few minutes just to let her know that she has not been left alone. When Maxine is exhausted from the forest, she quietly comes back to her caregiver for a piggyback ride home where she stands tall, always on the lookout. In the forest, Maxine is the boss.

Maxine is a gentle orangutan who never bites or pulls too hard. She understands that humans have limitations in the forest (we cannot follow her everywhere) and that we are not the same as her. She acknowledges other orangutans in the forest but chooses to be solitary. On rare occasions she plays with Berman, another female orangutan of the same age and size. They take turns chasing each other, swinging through the trees. Maxine expresses her intelligence, compassion, gentle nature and emotions; a great ambassador for her species. Maybe we can all learn something from Maxine.

Meet the Faces of the OCCQ

Orangutan of the Month: quirky Rangda