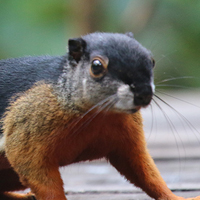 Tanjung Puting National Park, where Orangutan Foundation International has worked for over 30 years, and its surrounding area is home to a beautiful array of diverse flora and fauna including the Bornean orangutan. In this photo essay we would like to introduce you to some of the other species, from palm trees and beetles to saltwater crocodiles, which share the orangutans’ rain forest home. 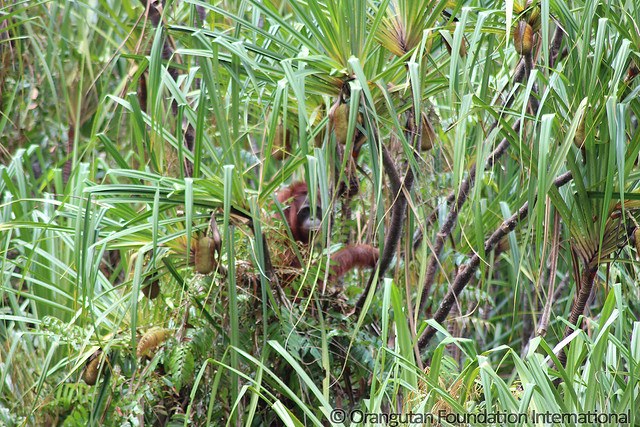 These palm trees line the edges of many rivers in Tanjung Puting National Park. Trees from that genus are dioecious, meaning female and male flowers grow on different plants. Screwpines are found on tropical and subtropical coastlines of the Atlantic, Pacific and Indian Oceans. In the background, we can see orangutan Enon looking back at us as she is foraging for food. Enon was brought to the OFI Care Center as an infant and after learning the skills she needed with the help of her caregivers, was released back into the forest. 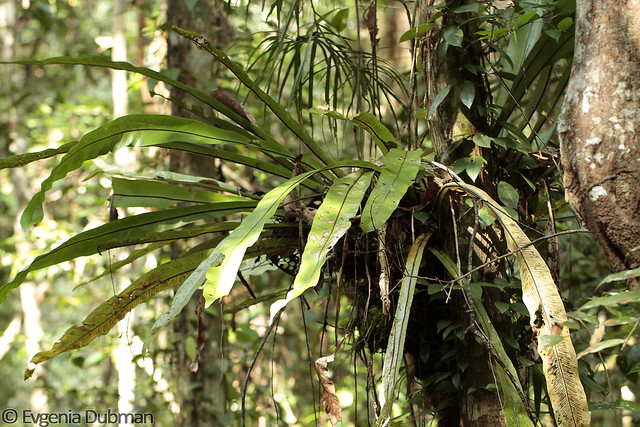 Bird’s Nest Ferns are found high in trees at Tanjung Puting National Park. They get their name due to the fact that when the fronds brown, they roll-up at the base of the plant and give it the appearance of a nest. They grow on very little organic material, taking root in the crook of trees. These ferns are found in South East Asia and East Australia. 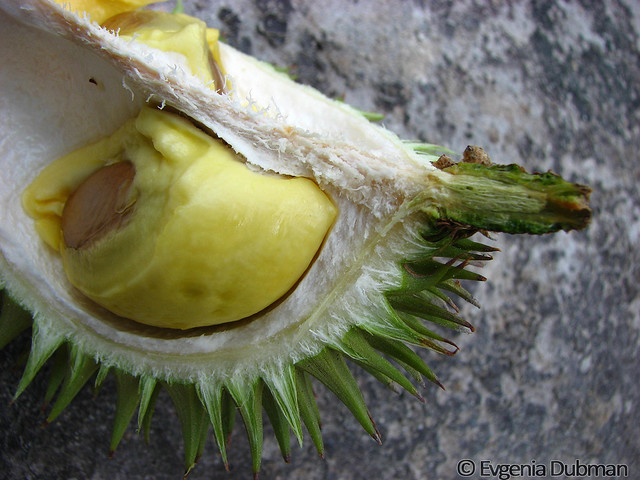 This delicious fruit is a favorite amongst orangutans and the local people. Whenever ‘karantungan’, as it is known locally, is in season, the OFI rangers even go as far as climbing the trees and filling their backpacks to bring to camp and share with the orangutans and other people. Much like avocadoes, durians are rich in fats which might be why they are so prized by the red apes of Tanjung Puting. Or maybe it’s the struggle of cracking open its dangerously sharp exterior that makes the flesh of the durian such a delicacy! 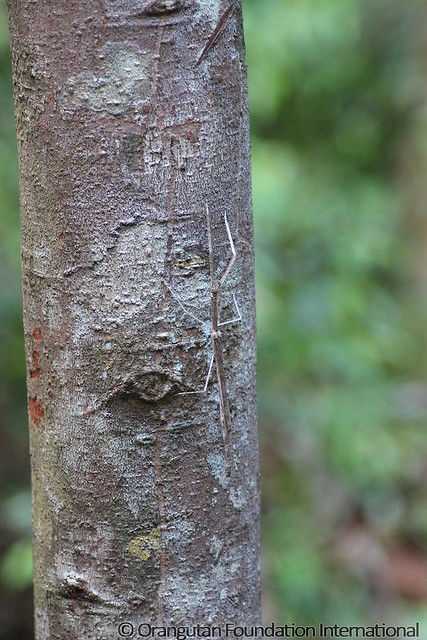 Phasmids, also known as stick insects, are masters of disguise. They often have the appearance of twigs or leaves to avoid predation. Borneo has over 300 species of Phasmidea, making it the global diversity hot-spot for that insect group. 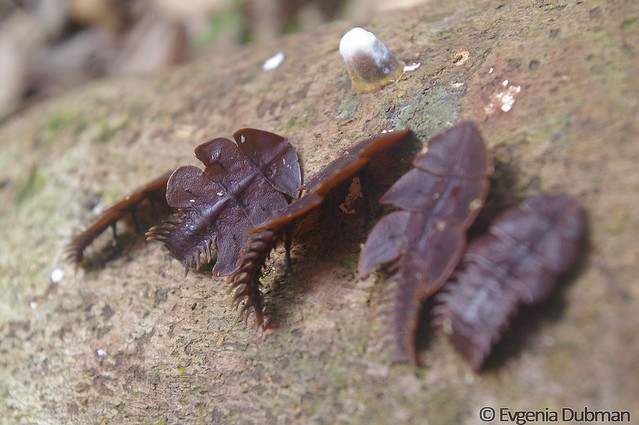 These prehistoric looking insects carry their name well. The three plates forming their thorax and their segmented abdomen resemble the head and thorax of the trilobite, arthropod of the Paleozoic Era. The specimens in the picture are females as males of that species are much smaller and have the appearance of regular beetles. Female trilobite beetles have tiny retractable heads that they tuck away at the sight of a predator. They live on rotting wood or leaf litter in the humid rainforests of Indonesia, Malaysia and Singapore. These five females appeared quite cozy on this log located just past one of our feeding stations. They were seen lounging on it three days in a row! 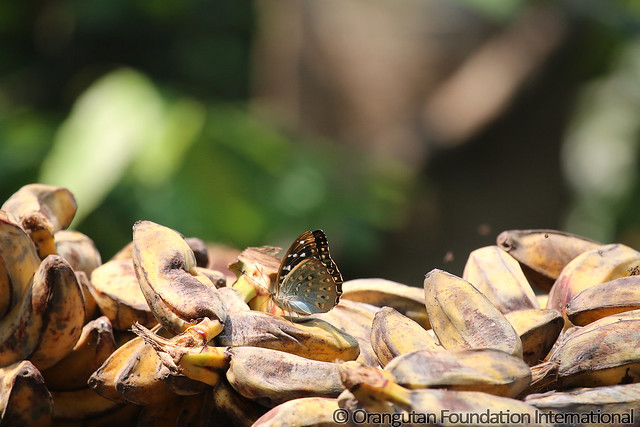 Mostly forest dwelling, this species of butterfly feeds on rotting fruits amongst the forest litter. Shown on the picture is a female. There is a strong sexual dimorphism in this species, with females being a darker brown with yellow spots, whereas males have dark wings with greenish blue at the bottom of their hind wings. Archdukes are common in Indonesia and Malaysia and frequent visitors at our feeding platforms. 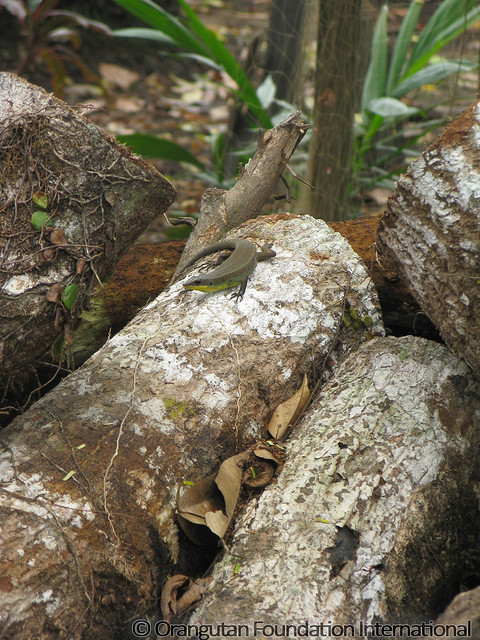 Skinks are small reptiles that mostly feed on invertebrates or smaller reptiles. They are one of the most diverse groups of reptiles, with more than 1500 species worldwide. Their sizes range from 7.5 to 35 cm, the one on the photo being around 25 cm. Skinks are often seen basking in the sun on logs by the trails that run through our Care Center forest. 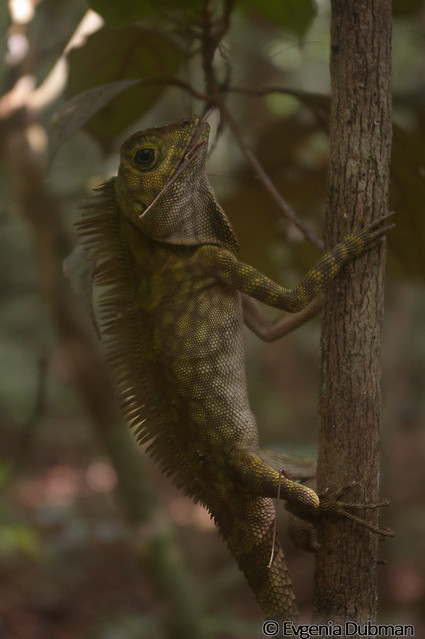 Only found on Borneo, this lizard is arboreal and often found resting on trees or vines of primary rainforest. It feeds on arthropods like ants and spiders. The male Borneo Anglehead lizard is brownish whereas the female is green in color. Clutch sizes are typically of four eggs and laid in intervals of three months. This photo was snapped right after the Borneo Forest Dragon, as this reptile is also known, had caught its meal. You can even see that one of the legs of the insect fell on the lizard’s left thigh. 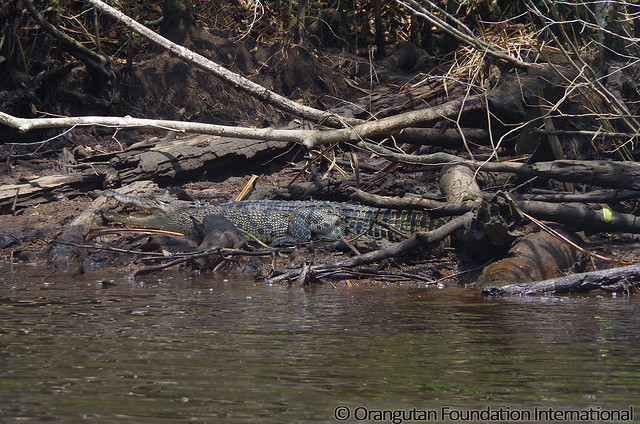 This is the largest living crocodilian species, averaging 5 meters long and weighing around 450 kg. Despite their large size, they are excellent swimmers and will take any chance to sink their teeth into something edible. Saltwater crocodiles have a large geographic distribution, ranging from eastern India all the way to northern Australia, and encompassing the entire Indonesian archipelago. OFI has rescued 3 of those large reptiles from a zoo and is planning to eventually release them back into the wild. 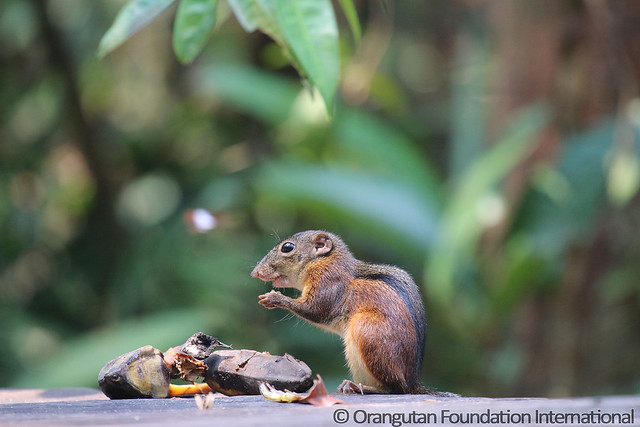 Distributed from southern Thailand to Borneo, the Three-striped Ground Squirrel is a small rodent that lives in primary rainforests. Mostly ground dwelling, the species feeds on roots, fallen fruits and insects. You can see an individual there happily munching away on bananas the orangutans left behind. 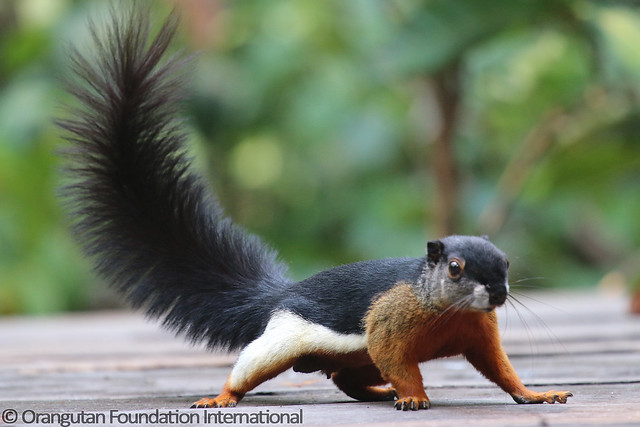 This squirrel mostly eats fruits but also some arthropods. The species is arboreal, only rarely going down to the ground. They are common and widespread from southern Thailand through Malaysia and Indonesia. Their remaining native habitat is very small due to growing palm oil plantations on which they are considered a pest. Another threat to Prevost’s Squirrel populations is their popularity as pets in Sarawak, for which they are poached out of the wild. 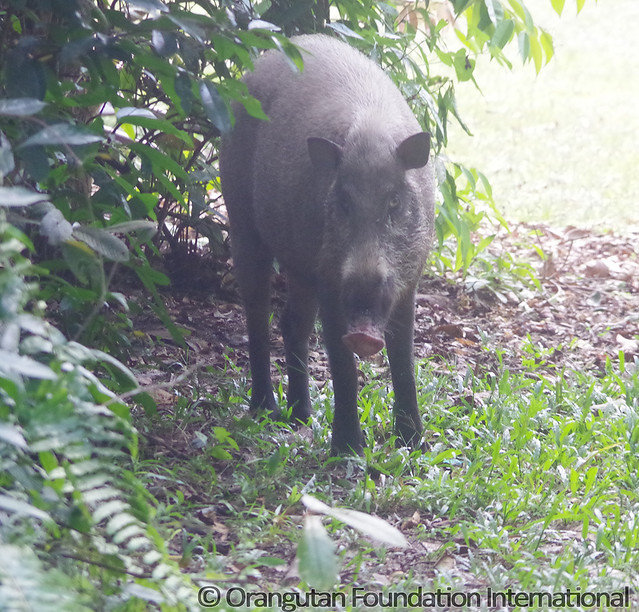 Considered ‘Vulnerable’ on the IUCN Red List, Bearded Pigs can weigh up to 120kg. Primarily feeding on fruits but also roots and vegetation, they also often follow gibbons and macaques, eating the fruits that these primates drop. At Camp Leakey, however, they feast on the leftovers which orangutans drop to the ground. Found in the Malay peninsula, Sumatra and Borneo, they are especially threatened in Malaysia and Sumatra due to heavy logging. 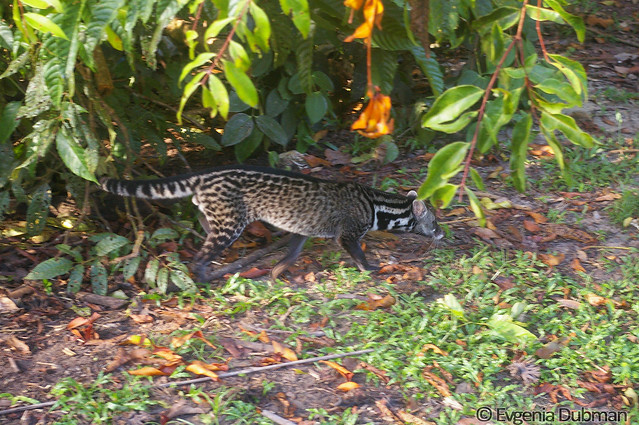 The Malayan Civet is an omnivorous mammal found on the Malaysian Peninsula, Indonesia and the Philippines. This species of civets inhabits primary and secondary forests as well as disturbed land. The civets are nocturnal and will spend the day tucked under the cover of trees sleeping. Although they are mostly ground dwelling, they still can climb trees easily. This civet was sighted here from the kitchen window at Camp Leakey while slinking away towards the fruit storage room. 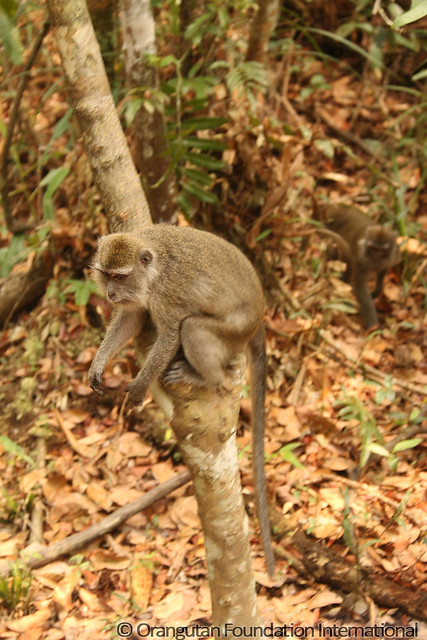 These primates are very common in Tanjung Puting National Park. Present from Indochina through Indonesia and the Philippines, they live most successfully in disturbed habitats. Also known as Crab-eating Macaques, they feed on fruits, leaves, small mammals, shellfish, and, as the name suggests, crabs. They can often be seen foraging on the banks of the Sekonyer River in the evening. 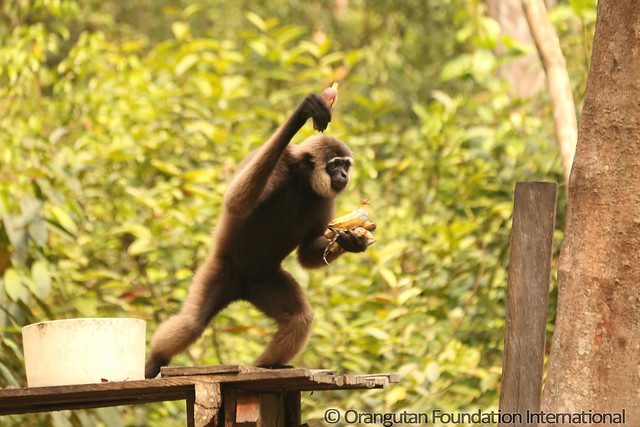 Due to habitat loss, Agile Gibbons are classified as ‘Endangered’ on the IUCN Red List. They are found in the southwestern part of Borneo and mostly eat fruits but also leaves and insects. These gibbons form lasting pair bonds, and can produce 5 to 6 offsprings in their lifetimes. They are rare visitors at our feeding platforms but always welcome. This one is seen taking his share of bananas before disappearing into the forest. It should be emphasized that the endemic Bornean Gibbon (Hylobates mulleri) is not found in this part of Borneo but rather to the north and east. Hylobates agilis is the gibbon found in the southwestern part of the island where Tanjung Puting Park is located.