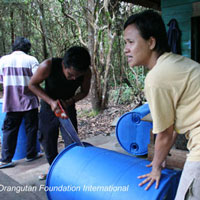 It’s my last day volunteering at the Orangutan Care Center and Quarantine, where I have been doing orangutan enrichment for the last 6 months. I am watching Samsu and Bangow sit on opposite ends of their swing unwrapping ferns wrapped around peanuts and durian jelly. The enrichment team wrapped them earlier this morning. As they unwrap the parcels, they use the ferns to make nests, lick the jelly, and eat the nuts. It never fails to make me smile when I see the orangutans making nests because right before they finish, they almost always re-position a few sticks and then hit the nest with the backs of their fisted hands. As I smile, watching Bangow reposition his ferns, I can’t help but think about the impact our enrichment team has had on the lives of the orangutans in the center. I’d like to share with you some of the enrichment stories I have experienced during my time here at the OCCQ

During my tenure we have installed swings or hanging tubes, made from large plastic barrels, in almost all night cages at the Center. The swings were a major hit with the orangutans who can be found playing or sleeping in the swings at all hours of the day and night. I was a little worried that the swings wouldn’t be quite such a hit with the staff who had to listen to the rattling chains all through the night, but I was pleasantly surprised: after the swings were installed in the first area, the staff at the rest of the Center were all asking me when their orangutans were going to get swings. The swing given to Bongow and Samsu, the two orangutans mentioned above, had a particularly strong impact. Previously when someone from the enrichment team entered quarantine these two boys would start banging on their metal door and making as much noise as they could to get our attention (and presumably whatever enrichment item we brought for them that day). Since I am a member of the enrichment team, I have only ever seen them behaving this way, so I will never forget the image of these two “bad boys” cuddled up in their swing: Bongow sitting with his arms around Samsu and his chin resting on Samsu’s shoulder. There is no doubt that they were still eager for enrichment when we brought it, but after they got their swing, the door banging in my presence was very rare, and any portable enrichment items were almost always brought into the swing for use.

Before I came to the Indonesia, I saw on the OFI website that the enrichment team needed burlap, also called hessian, to give to the orangutans. I bought a couple of sheets of burlap from The Home Depot and brought them with me. When I arrived, the enrichment room had a huge stack of burlap sacs in the corner and I was a little disappointed that I hadn’t used the space in my suit case for something else. In my disappointment I was forgetting one of the main pillars of enrichment, which is that animals don’t categorize things the same way we do, so two items which we may consider the same may be completely different to the orangutans. The burlap that I brought was a large bolt, rather then a sac. It was also more finely woven, and softer, than the burlap that was available locally. These differences turned out to be important to one of the large cheek-padded orangutans, Montana. This adult male never touched the Indonesian burlap sacs except to toss them out of his cage. One day Ibu Maryanti and I decided to give him a whole bolt of the burlap that I had brought from the United States. When we gave it to him he opened it up, looked at and smelled it then set it down on a tire and apparently ignored it. The next morning I came into work and he was sleeping on his tire with just his cheek-padded head poking out from under the burlap. Later that morning when the cleaning service was hosing down his cage he carried it around with him and kept it from getting wet. He managed to keep it dry and clean for over two months and almost every morning when I came into work he was still under his burlap blanket.

Many of the cages have buckets that the orangutans like to build nests inside, put on their heads and sleep in. On a particularly hot day we decided to fill them up with water. Ulin is the largest orangutan in her cage but normally she allows her roomate Patricia to dominate non-food related enrichment. Patricia particularly loves sleeping in the bucket and Ulin normally lets her. But on this hot day Ulin spent over an hour bathing herself in the bucket! She would cup the water and then rub it over various parts of her body. Later she began using the water to scrub her already clean cage. Ulin was so exited about the water that Patricia didn’t get a chance to play with it until the next day when we refilled the bucket.

Boy is another one of the large cheek-padder males living at the Center. One day we gave him a parcel like the one mentioned above, made from various branches and filled with treats. This particular parcel was made from 4 species of fresh forest plants and filled with favourite orangutan treats (jam, peanut butter, peanuts, apple chips, and bananas); the whole thing was held together with a very long and thick vine. We were really excited to give him all these special treats, but couldn’t watch him directly because he’s very secretive and doesn’t like to be watched while he’s using his enrichment. We sat a bit away from his cage and discreetly watched him untie the vine and toss all the treats aside. We really shouldn’t have been surprised, because whenever he gets his hands on any thing string like he always weaves it in and out of the bars on his cage. This time he turned his back on us and used his massive body to block our view. I assumed he was performing his standard weaving behavior. But it wasn’t long before he tried something new. Boy took the vine and tied it around his big belly like a belt. All the orangutans are fascinated with rope and always appear to be trying to tie knots but this is the first time I saw one of them actually managing it. For the rest of the day Boy continued wearing his green belt.

People often think of enrichment as toys for animals in cages, but it is much more then that. Enrichment is defined as providing animals with something that “increases the animal’s behavioral choices and draws out their species-appropriate behaviors, thus enhancing the animal’s welfare” (1999 AZA Behavior Scientific Advisory Group, The Shape of Enrichment). The Care Center’s enrichment team uses enrichment items and techniques to keep the orangutans occupied and to help keep them mentally and physically stimulated; this is important for their preparation for released into the wild. For the orangutans at the Center enrichment means a better life for the time they have to spend in enclosures before they go back home to the forest.

With the large population of orangutans at the Care Center, enrichment items are always needed. To make a donation today, click here.