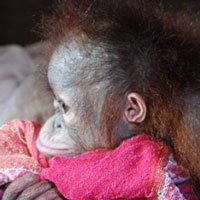 Douglas Soledo has a story quite unlike the tales of other orangutan orphans. Featured in the new IMAX movie, BORN TO BE WILD, opening this April, Douglas Soledo is about to become an international movie star! His arrival at OFI’s Orangutan Care Center and Quarantine (OCCQ) in 2010 coincided with the beginning of the film shoot. His name comes from two aspects of the filming process: David Douglas was the Director of Photography on the film shoot, and Soledo was the name of one of the Imax cameras the film crew used. Thus, the new resident of the OCCQ was named Douglas Soledo. BORN TO BE WILD follows the rehabilitation journeys of several orphaned orangutans until they are eventually released into the wilds of Borneo.

Several orangutans from OFI’s Care Center were cast in the film. Douglas Soledo was selected to illustrate the baby phase. Yet his own story has a dark side, one that he is still recovering from: the death of his mother at a palm oil plantation.

Despite his involvement in the film, Douglas didn’t let fame go to his head. He appeared shy around two recent documentary filmmakers who were interested in his tale of stardom. He timidly observed one of the male filmmakers and when the man held out his hand to stroke him, Douglas nipped him on the finger. He seems nervous around men, and his cautiousness continued through the recent filming process. At one stage, Douglas swiped at the filmmaker’s camera when it got too close. If he doesn’t trust someone, he certainly knows how to stand up for himself, even though he is barely one foot tall.

And yet Douglas can be the sweetest creature around the people he knows and trusts. His tight bear hugs feel reassuring and he often seeks affection from his caregivers. His eyes have been described as “heart-melting.” Douglas’s female orangutan friends also seem to have fallen for his charms. Poppy, a gentle sweetheart, has been seen caressing his shoulders or simply wrapped around his little pot belly. Douglas, however, remained ambivalent about this attention and sat like a dumpling with his arms flat by his sides as she cuddled him. Another female, Sri, often showers him with affection as well.

Douglas has made other progress as well. From his two night enclosure buddies, Poppy and Hoffman, Douglas has learnt some basic foraging skills such as finding edible berries or fruit which grow in the Care Center forest, as well as digging at the bottom of trees for ants. It is always interesting to watch him eat; he rolls out his big lusty lips so that he can further examine the food on the tip of his lips which he seems to churn on for hours, making occasional sucking sounds.

Yet Douglas’s story has sad undertones. When he first arrived at the Care Center he often cried at night, most likely traumatized by the death of his mother. Douglas Soledo came from a region of Central Borneo where many palm oil plantations have replaced the jungle; loggers or palm oil workers probably killed Douglas’s mother in front of him, since young babies are constantly attached to their mothers. He was sold to a village family for 300,000 Indonesian rupiah ($34.5 American dollars) and was kept in a little plastic cot with a towel. The family soon realized the difficulty of constantly having to look after Douglas and having to buy milk for Douglas when they already had their own small baby. The village family contacted OFI for help.

Trucks and men are particularly stressful for Douglas; perhaps they bring back traumatic memories. One memorable day when he was taken into the forest, he heard the sound of a large truck passing by the Care Centre. This sent him into a panic; scrambling rapidly up to the neck of his caregiver for protection, he knocked over a bottle she had given him and spilled it all over her.

Miss Tika has become his foster mother and needs to reassure him whenever he cries, squeals, or otherwise seems anxious. At first, like many human infants, Douglas needed the constant reassurance of an object. He latched onto a towel which he firmly clutched in his hand, sometimes dragging it behind him, sometimes flinging it around (much like a human baby with a security blanket). Yet with the constant care of his human mother, Douglas has become a happier infant who is developing good relationships with his orangutan peers. He no longer needs his security blanket! In time, perhaps he will be able to forget the trauma of his past, which still seems to haunt him. His wariness of certain people, however, is possibly a good thing. Throughout his rehabilitation process at OFI’s Care Center he will be taught important life skills for return to the rain forests of Borneo where caution around humans will be an imperative for survival. Looking into the eyes of an orangutan…

Orangutan of the month: Vanessa