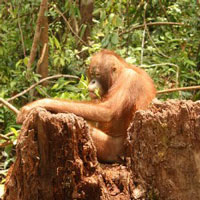 Introducing Omry, the mischievous star of the IMAX film Born to be Wild: Omry is easily remembered from the scene where he wreaks havoc in a kitchen by clanging pots and ripping into a bag of flour. He is also the youngster playing on the clothesline and messing with the clean laundry in the film. Born to be Wild follows several different orangutans at different stages in the rehabilitation process. For Omry, the movie focuses on when he was confiscated by Dr Biruté Mary Galdikas and her son Fred and first brought to the Care Center. Omry’s positive and affable nature made him a perfect actor for the IMAX film.

This little hero, Omry, has overcome various obstacles throughout his life, including partial blindness and being brought up as a pet. Often when young orangutans are raised as pets, they become overly dependent on humans. Orangutan youngsters are very dependent on their mothers and imitate them to learn the behaviors they will need in later life. Thus, with no adult orangutan role model, orangutan orphans have trouble learning the behaviors of a wild orangutan. Omry was no exception. At the Care Center, however, he has blossomed into a strong and independent orangutan, despite his disability. When he was very young, Omry’s life was literally turned upside down when loggers chopped down his forest home to plant oil palms in the region of Rantu, Central Kalimantan. We think Omry’s left eye was damaged in the process of capture. Omry’s mother was killed and he was captured by the loggers who had murdered his mother. He was eventually confiscated and brought to the Care Center. Yet sad news followed: OFI’s veterinarians were unable to do anything to fix his eye and so he will have limited vision in his left eye for the rest of his life.

In humans, it is believed that monocular blindness (blindness in one eye) can contribute to a 25% decrease in the field of vision. However, the subject has not been extensively investigated in orangutans and this figure may differ due to the differences in facial shape between orangutans and humans. Monocular people experience impaired vision, since binocular vision is vital for eye-aiming and focusing. This may affect motor skills, as well reaching and balancing. Monocular vision may also cause clumsiness, bumping into things, and difficulties with hand-eye coordination.

Learning how to Climb with Partial Blindness

It is easy to imagine how difficulties in depth perception and coordination may affect the climbing abilities of the world’s largest arboreal ape, the orangutan. Yet Omry adapts to his condition with various techniques. For instance, he often wobbles his head. Dr Popo, the head veterinarian at the Care Centre, believes he uses these rotating movements in order to focus and expand his horizon of vision. Often, when Omry reaches out for food, he lifts his arms up and down, perhaps to gain a better perception of depth.

Despite his disability, Omry is a confident and agile climber and quickly disappears into the canopy when he is taken out of his sleeping enclosure for the day. Thanks to the dedication of his caregivers and their determination to take him into the forest as often as possible, he has gradually developed strategies for moving through the trees. He is a rapid climber and seemingly uses momentum to compensate for a lack of depth perception. Omry has adapted remarkably well and has remained positive, sociable, and playful.

When I ask the caregivers for some stories about Omry, they shyly reply that he just likes to play. Sometimes it is difficult to extract tales from the rather quiet and reserved Indonesian caregivers, and so it must be done in a roundabout fashion. I ask if he has shown any interest in female orangutans and at this everyone collapses into laughter. No, he’s still too young, they reply. He is more innocent than his friend Malcolm who has already shown interest in the females in nearby sleeping enclosures. Omry prefers playing with his male friends, Mitchell and Faisal. Faisal is his closest friend and the two are often taken out together into the forest.

The caregivers proceed to explain how they enjoyed watching his antics throughout the filming of Born to be Wild. They reminisce about the infamous time Omry stole washing from a clothes line. One of the caregivers animatedly leaps up and does an impression of Omry. She pulls clothes off of a nearby line and drapes one of the t-shirts over her head, sending everyone into fits of giggles.

When Omry is released into the forest for the day, he sometimes prefers interacting with the caregivers rather than his orangutan peers. He seems to enjoy being the center of attention. He will often drape leaves, branches, even weeds – straight out of the swamp and dripping wet! – over his head and wait for a reaction. He seeks affection from humans and often revels in long, tight cuddles. This may be due to his experiences as a pet. The caregivers encourage him to develop his forest skills by joining his more adventurous friends Faisal and Mitchell, or by tempting him into the trees with peanuts. Often his inquisitive nature takes over and he enjoys poking, climbing, and exploring things, including large tree holes whenever he can find them! Despite the difficulties of his past, Omry has shown determination to adapt. His disability certainly hasn’t dampened his spirit or charisma.