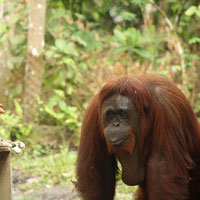 In the new IMAX movie, Born to be Wild, Siswi is filmed sharing noodles with Dr Biruté Mary Galdikas as they sit together outside Galdikas’ house in Camp Leakey in Tanjung Puting National Park, Central Borneo. Siswi is also captured walking on the causeway from the river, and wrestling playfully with Dr Galdikas. Camp Leakey is the historic research and conservation camp which Dr. Galdikas established in 1971 and where she began her research about the orangutans of Borneo with the encouragement of the famous paleoanthropologist Dr Louis Leakey (hence the name of the camp). Leakey strongly believed we could discover more about human evolution by studying the great apes, our closest living relatives in the animal kingdom: gorillas, chimpanzees, bonobos, and orangutans.

Siswi’s appearance in the film is not surprising since she frequently comes back to camp from the forest. In fact, her placid yet intelligent nature illustrates perfectly how humans and animals can live side by side, quite literally. Siswi doesn’t always make a nest high in the trees and will occasionally sleep in a shelter by the boat dock instead. She also enjoys relaxing and playing with the rangers by the kitchen or with visiting boat crews at the riverbank. By observing the humans around her, she has learned how to use tools such as brooms, and has picked up various tactics to receive extra food. This is an unusual example of a wild orangutan exhibiting behavior shared by all great apes: imitation. Dr Galdikas has researched imitation by wild-born, ex-captive orangutans at Camp Leakey. Research indicates that imitation is an expression of intelligence and that features of this behavior could mean that some orangutan tool use is acquired by social learning through imitation. Science aside, Siswi’s story is rich in personal highlights and dramas.

Siswi is often called “the receptionist” by the local tour-guides since she is often the first orangutan seen by the tourists visiting Camp Leakey. True to character, she often enjoys dozing at the dock where the tourists first disembark. Although Camp Leakey is still a vital research station where Dr. Galdikas and the OFI rangers track wild orangutans and record their behavior and ecology, nonetheless, tourism is key for increasing local and international understanding of orangutans and their rainforest habitat. Siswi’s friendly nature and “center-of-attention” antics are well received by Camp visitors. She almost seems to crave the attention of photographers, and happily tolerates the crowds, rolling on the jetty, legs waving in the air.

As the tourists visit the feeding station, where supplementary fruit is provided to the orangutans in the afternoon, the captains and boat crew of the klotoks (the long boats used to transport tourists to Tanjung Puting National park) often sit and play with Siswi. She seems comfortable around people and enjoys their attention. This behavior is remarkably different from all the other female orangutans, who appear at Camp Leakey mainly for an occasional brief visit. In fact, Siswi is the only female at the camp without an infant; perhaps this explains her hunger for human affection. A terrible infection which almost killed her some years ago probably affected her ability to have offspring. Unfortunately, this also decreased male orangutan attention to her, which she seems to crave. At one time Siswi followed the dominant male of Camp Leakey, Tom. Tom mates with most of the females in his territory except Siswi, despite her efforts to tempt him. The rangers claimed that after several days of stalking Tom, they saw him tire of Siswi, eventually chasing her away. That afternoon, Siswi seemed reticent and out of character, ignoring the boat crew and staying in her shelter quietly and alone, wanting only to sleep. One might imagine that Tom’s rejection of her had upset Siswi. Kusasi, the previous dominant male, had often consorted with Siswi. In fact, she was one of his favorites. Since she can no longer have offpsring, Siswi seems very jealous of other females and will chase them away whenever they get to close to her.

Yet despite a complicated personal life, Siswi remains the heart and soul of Camp Leakey and the rangers who work there are full of tales relating to her antics. In one story, the rangers describe the day Siswi was eating a watermelon. A rumor circulated in camp that Dr Galdikas, who was expected to arrive that day, had already reached the dock. “Ibu Professor is here!” one of the rangers exclaimed (‘Ibu’ is a respectful Indonesian address to a woman). Siswi recognized these words as soon as she heard them and immediately abandoned her watermelon to head down to the dock but Dr. Galdikas had not yet arrived. She was nowhere in sight. Siswi simply turned away, returned to camp and continued eating her watermelon. Rangers are also eager to show visitors photographs on their cell phones depicting Siswi holding a bright pink umbrella over her head.

Siswi is one of only two orangutans in the camp allowed to enter the storeroom where the fruit for the daily feeding is kept. This is because Siswi only takes the food she needs and never causes a mess like the other orangutans who raid the storage area. It’s a good deal: by keeping the place tidy, Siswi gets first pick of the fruit, and always ensures that she picks the ripest ones. Siswi also excels at imitating the humans around her, yet all of her behavior is entirely self-taught – yet more evidence of orangutan intelligence. Sometimes she will sweep the kitchen with a broom, an example of tool-use; other times she steals sandals from unaware tourists and wears them on her hands. One captain remembers how Siswi once stole some clothes from his boat and tried to put them on, admittedly with much difficulty. Siswi certainly seems to be thriving at Camp Leakey. She is surrounded by lush, bountiful rain forest with all its food resources, and has a supply of fruit from the storeroom whenever she needs it. This lifestyle seems to suit her laid-back character. Yet after such a complicated personal life, who can blame her for wanting to take things a little easy?

Orangutan of the Month: Uci