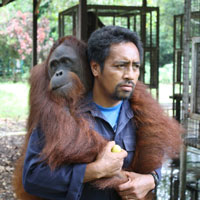 Not every orangutan release goes as planned. In April 2010 Congo, an eleven year old male, was released at a forest camp located in a secure patch of forest stewarded by OFI and used as a release site for rehabilitated orangutans. Unfortunately, in August he had to return to the Care Center in the village of Pasir Panjang. Congo had sustained injuries across his entire body, including a large wound on his right foreleg and a cut in his gum which exposed his jaw bone. OFI veterinarians and staff believe a larger male had attacked him. It seemed that Congo had barely escaped with his life.
The dynamics of releasing orangutans back into the wild are complicated. Those released must be carefully monitored to ensure that they are adapting to their new environment, socially and physically. Luckily, due to the thorough post-release care and procedures enacted by OFI, Congo was quickly spotted after his fight and brought back to the OFI Care Center for medical treatment.

Congo had first arrived at the OFI Care Center in 2004 after being confiscated by Indonesian government wildlife authorities. He was very thin when he arrived, weighing only 12.5 kg. We estimate that he was around 5 years old. At the OFI Care Center, Congo was regularly taken into the forest with other orangutans by dedicated caregivers where he learned important skills such as nest construction and foraging for food. Eventually, Congo’s rambunctious nature became difficult for the assistants to manage, an indication that he no longer needed their daily care. He was clearly ready to return to the wild. He was released in April 2010 along with his sleeping enclosure companion, Ochel, as well as two other semi-wild orangutans that were being held in quarantine.

Choosing the right Orangutan for Release

Prioritizing orangutans for release is very challenging. Often, recently captured young, semi-wild orangutans are the first in line, but rehabilitated orangutans with good forest skills are also considered. Usually, orangutans are released in pairs, to provide a social unit in their new location. Before the release happens, though, the site must be properly assessed and the population dynamics of any nearby orangutans analyzed. Sufficient food resources at the forest site also need to be ascertained. With this information in mind, Dr Galdikas, along with the Care Center’s veterinarians, creates a short-list of orangutans according to age, weight, and forest skills. This information is collected by asking the caregivers which orangutans are travelling independently throughout the forest and which are foraging successfully. When orangutans become more solitary – disappearing on their own for extended periods of time in the forest – it is considered a promising sign for release. Once Dr Galdikas approves the list, the release plan is crafted by the Supervisor of Releases, Pak Sehat.

Both Congo and Ochel were of suitable age and weight, had bonded well, and thus, were considered perfect candidates for release together. Once orangutans are released into the forest, they are monitored by Pak Sehat and OFI rangers until the releasees construct their nests in the evening. When I asked Pak Sehat if there were any differences between how rehabilitated orangutans react when they are released, compared to recently captured semi-wild orangutans, he laughed and said wild orangutans just run! Congo took his time, and Pak Sehat was able to watch him closely until he made his nest.

Post-release monitoring is essential, to ensure that released orangutans are adjusting successfully to their new environment. At the release site, a team of four OFI rangers monitor orangutans such as Congo and supplement their diet with extra fruit. For one week every month the rangers also conduct research by tracking the orangutans daily, from the moment the orangutans wake up until they make their nests in the evening. A key part of the assessment is to monitor socialization and interactions. Rehabilitated orangutans must learn to socialize appropriately with other orangutans living nearby. Problems sometimes occur when released subadult males are attacked and wounded by resident males. In order to fully adapt, rehabilitated orangutans must learn the intricacies of free-ranging orangutan behavior and interactions.
After Congo was wounded, veterinarians from the OFI Care Cente and Quarantine quickly arrived at the release site, and Congo was returned to the Center for medical care.

In recent months other released orangutans have been brought to the Care Center for attention. First, Stephen was brought back. Another two who were ill were brought back: Frangki suffered from a cough and Saut was secreting mucus. Three others, Enon and her baby, along with her adopted son, Owi, were brought back because they kept venturing to a neighboring palm oil plantation five miles away and raiding the kitchen, completely oblivious to the dangers involved. Unfortunately, these are the kind of modern-day realities that OFI must contend with, sometimes daily. Palm oil plantations and other human activities constantly pose a threat to the success of orangutan releases. As more and more palm oil plantations are established across Borneo, it is becoming increasingly difficult to find suitable release sites away from human interference.

Back at the Care Center, the veterinarians treat the orangutans and check for other injuries or signs of illness, such as diarrhea. They also check their weight before they are considered for re-release. Congo was treated for his wounds and was also fed 200ml of thick milk twice a day. When he arrived in August 2010 he weighed 29 kg; by March 2011 his weight had increased considerably and he had recovered from his wounds. The veterinarians agreed that he was ready to be released back to the wild.

Frangki and Saut made swift recoveries, and it was decided that they should be released along with Congo and Stephen. Unfortunately, a tough decision had to be made concerning Enon and her baby. Since she kept raiding a nearby local palm oil plantation, (with Owi in tow) it was decided that a new release site should be found for her. Stephen was released with Congo, Frangki, and Saut. In early March 2011, almost a year after Congo was originally released, the four orangutans were again released back to the wild. As of now, all four are doing well, living healthy back in the forest.