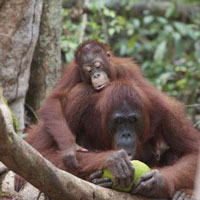 You may have already met adult female Unyuk, and her infant Ursula. They briefly feature in the recent film Born to be Wild IMAX 3D which was partially filmed at Camp Leakey, Tanjung Puting National Park, Central Borneo. A historic but still active research and conservation site, Camp Leakey is where Dr Biruté Mary Galdikas and OFI (Orangutan Foundation International) rangers have been conducting wild orangutan research for the last forty years. In fact, Unyuk is one of the original orangutans that Dr Galdikas raised and released into the adjacent forest during the early years when Camp Leakey still functioned as a release site. Although a middle-aged female, Unyuk has a young infant, Ursula. Unyuak and Ursula are briefly featured in the IMAX film when Unyuk returns to Dr. Galdikas’ house at Camp Leakey and eyes the cup of coffee that the good doctor is drinking.

Unyuk is a supermom. Or superaunt! Not only is she nursing Ursula but she also allows young adolescent Percy to follow her and interact closely with her. This little unit of three orangutans is unusual; Unyuk enjoys mothering older immatures, such as Percy, who are no longer nurtured by their birth mothers. Yet, Unyuk is a role-model with a difference. She observes and imitates the rangers around her to develop ways of supplementing her family’s jungle diet with food sourced within the camp.

In Borneo, orangutan mothers encourage their grown up offspring to leave the family unit and seek independence, beginning from six to eight years of age. By age ten orangutans are considered adolescents and Percy falls into this bracket. Adolescence is the most active stage of an orangutan’s life in terms of socialization. By observing and interacting with other individuals, adolescents learn about the subtleties of orangutan behavior and become better prepared for adult life. Unyuk seems to enjoy supporting these fledgling juveniles and adolescents as they venture into the world on their own. In the past she has “looked after” Siswi’s then-juvenile, Sampson, and now she enjoys aunting Princess’s son Percy.

Percy has chosen his new mentor wisely. Like Percy’s own mother Princess, Unyuk is one of the most intelligent individuals at the camp and uses this intelligence to find extra food. As the world’s largest arboreal mammals, orangutans find travel energetically costly. Thus, they must spend much time foraging for food. However, some orangutans have developed other ways of sourcing food: by carefully observing and learning by imitation. Some orangutans have even been seen imitating local fishermen in Borneo. Imitative behavior is recorded in all great apes and is considered to be a sign of intelligence. Here are a few of Unyuk’s techniques for obtaining extra food which she, presumably, developed by observing and imitating the rangers in Camp Leakey.

One morning the rangers awoke to find their kitchen ransacked and devoid of potatoes, cucumbers and tomatoes. The culprit, long gone, must have used a key, since the kitchen door had been locked in the evening. Only two orangutans are capable of opening the locked door, Princess and Unyuk. Both have been seen observing the rangers as they hang up the key, waiting for an opportune moment to take it. Yet on this particular occasion, the rangers assumed it was Unyuk since she was in the area that day and was later seen in the afternoon easing open the kitchen door. To distract her from the kitchen, Camp Leakey manager, Pak Faisal, told Unyuk to go to jalan Toges or Toges trail for food, which she immediately understood – Pak Faisal gave her some bananas along the way.

On another occasion, a ranger spotted Unyuk positioned under the window of the store-room, looking as if she was scouting the area, keeping guard. Unyuk’s baby, Ursula, was seated on the window ledge, passing down ripe bananas to Unyuk. As the ranger approached, Ursula quickly descended and disappeared with her mother into the forest with the fruit. Although still small, the precocious Ursula has learnt quickly from her mother. She has shown signs of intelligence by helping formulate strategies to take bananas out of the store-room, unnoticed.

Unyuk often lingers around the klotoks (the long boats used to transport tourists through Tanjung Puting National Park), waiting for a golden opportunity to access the kitchen or store-room. Sometimes she relaxes in the foliage beside the harbor with her baby Urusla, and quietly observes the boat-crew. Sometimes their new companion, Percy, joins them. He seems to be grasping more and more of Unyuk’s techniques for locating food. Often Percy can be seen eating ketiyau flowers with Unyuk and Ursula when ketiyau trees flower by the river’s edge, as well as reed stems in shallow water.
Competition for food is a strong disincentive for socialization, particularly for adult orangutans. It is often argued that orangutans can only risk lengthy social interactions when there is an abundance of food. Perhaps because Unyuk has few problems supplementing her jungle diet with extra food, she does not mind Percy’s additional company.

Often, like Unyuk and Princess, his own clever mother, Percy observes the rangers or tour guides, then reaches into their pockets when they least expect it. It seems that this nimble little ape is learning quickly from both his role-models. Unyuk, Ursula, Percy and other orangutans feature in the IMAX Born to be Wild trailer which can be viewed for free on Youtube [PLEASE HYPERLINK THE LAST 5 WORDS TO THE YOUTUBE TRAILER]. Here Percy can be seen briefly begging for food from his mother’s mouth (but it looks like a kiss!): http://www.youtube.com/watch?v=wv2Af-H7ZnI