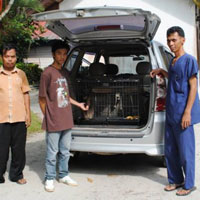 The young male Agile Gibbon who we have been calling Gibbs has left his much larger orangutan cousins at the OFI Care Center this week. This small, arboreal ape is moving to a new home, the Kalaweit Center in nearby Palangka Raya. This is a special facility for gibbons where he will be able to socialize with apes of his own species, and receive the complex care needed to return gibbons to the wild. These elusive and musical apes who form life-long pairs, which they re-affirm every morning with vocal duets, are particularly challenging to return back to the wild. Their immune systems are evolutionarily adapted to arboreal (tree-dwelling) diseases, since they almost never come down to the ground which makes them very susceptible to human pathogens. Also, their strict social system is not welcoming to lone strangers; gibbons need to be released as family groups.

Gibbs has been a resident of the Care Center for three months (read his arrival story here) and has given the staff and volunteers a rare glimpse into the life and behavior of these small apes. Although gibbon song is the defining morning sound of many Asian forests, actually approaching and observing these animals in the wild is a feat not even the most dedicated primatologists always accomplish.

On the day of the transfer from the Care Center, although surrounded by larger, playful orangutans, the juvenile gibbon seemed very relaxed in his enclosure which the previous enrichment officer (Ms. Kylise) had specially designed. The gibbon rested with his arm loosely dangling over his knee; this pose resembled that of the easy-going men in the local village who often chill on their porches. Gibbs is a friendly character and often enjoyed simply sitting holding hands with his care-givers. He bonded particularly well with Pak Polis who helped move him into his transit pen for the trip to the new center.

Gibbs knew his place on the social hierarchy. If he felt intimidated by someone he would quickly spin around, showing them his bottom, and then peer around to find out if they were looking! This is a classic submission signal among many primates. Gibbs had also learned effective ways to communicate his desires with the caregivers since he would often reach out his hand to passerbys, then guide their hands to his food basket where bananas were frequently placed, as if he was trying to explain precisely what he wanted to eat!

His soft oua oua sounds will be sorely missed in the Care Center. These haunting calls give all gibbon species the local Indonesian name ‘uwa-uwa’. We are reassured knowing that Gibbs will be carefully attended by the experienced experts at the Kalaweit center, and one day he will make his long-awaited journey back to the rainforest.

Helping Gibbons: The Story of Dea