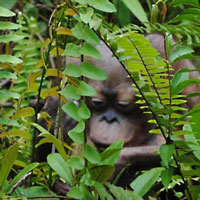 Resting in the heights of his hammock, Otok is king, towering over the other orangutans in the veterinary clinic and bestowing his caregivers with aloof glances. His unsociable ways are renowned in the Care Center since Otok seems to exult in solitude, cocooned within his precious hammock. Even when offered fruit, he will simply fling out his hand without descending from his canvas bed, often without acknowledgment. It perhaps shouldn’t be said, since all orangutans are beautiful in their own way, but Otok is ugly in the stereotypical way, with his big teeth and grumpy frown, as well as lack of hair. So why is he orangutan of the month? Simply because he is one of the most vibrant characters imaginable. Practically every day his antics send everyone into fits of giggles as we unearth more facets to his personality and unravel a tender side as he slowly comes out of his shell. Here are a few of the stories that have made us laugh over the past month.

First, it should be explained that Otok is not completely well and being cared for by the experienced veterinary staff in the clinic. Since he is constipated, he is in on a strict diet and must eat at regular intervals. In addition, throughout the day, Stephanie the botanist, Enrichment Officer Judith, and I have been treating him with forest therapy.

As an independent spirit, Otok often shows his disdain whenever we follow him, so over time we have learnt to watch him discreetly as he investigates the forest, making the occasional nest in the shade. On one venture into the forest, he made a nest under the boardwalk near a jungle hut. As Stephanie observed some of the nearby plants, Ibu Milah passed by on her way to one of the huts. Suddenly Stephanie heard a scream. Ibu Milah had spotted Otok’s face, placidly peering up at her from below her feet under the boardwalk; he must have completely startled her.

Otok often seeks to supplement his diet by eating forest foods. Stephanie discovered the intensity of this desire when he executed a rather sneaky maneuver. As he walked along the boardwalk in the direction of the Medang hut, Stephanie expected him to continue on the path towards the forest. Instead, he disappeared into the undergrowth. Stephanie realized he was making his way around the rear of the hut. He was sneaking his way in! She hurried towards the sudden loud yells. The caregivers had been quietly eating lunch but Otok had decided to join them for rice, and was munching away, holding two whole handfuls of rice from the cooking pot. As the men peeled him away and safely plunked him back on the pathway, Mr Ateng dryly observed with a smile, “I think he must be hungry.” Since this episode Stephanie has needed to divert Otok from the huts, using various ploys such as offering him one of his favorite forest foods, a tender fiddlehead from a local fern.

Sometimes Otok manages to entertain himself, by stealthily stealing from our pockets. On one occasion he managed to pinch a plastic bag which he proudly swung in the air. He then decided to construct a nest, using the bag as a blanket; as we watched him from afar, his antics made us giggle. As he becomes more accustomed to our company, he is revealing a more playful aspect to his personality and often blows kisses at us. Once, as Stephanie carried him through the forest, he blew kisses over her shoulder towards Judith; they both broke into much laughter which incited Otok to increase his kisses!

Thankfully his health seems to be improving and consequently his face is changing with his bone structure looking more prominent, making him look handsome, and his eyes, softer. With constant monitoring from the experienced veterinary staff we hope that Otok will make a swift recovery and return home to his sleeping cage buddies and in time, the permanent comfort of the forest.