Orangutans Return Home to The Forest 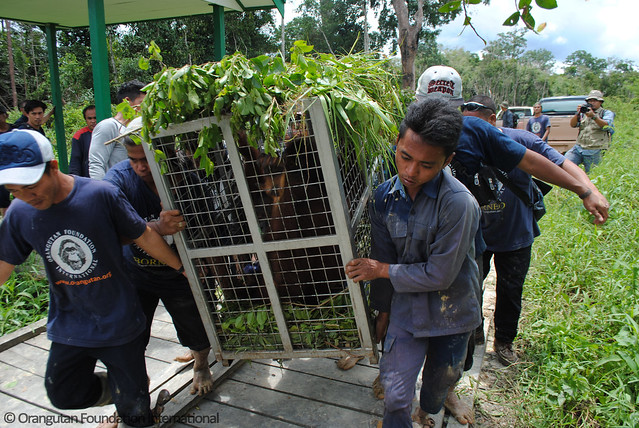 Orangutan Foundation International (OFI) and The Rimba Raya Biodiversity Reserve, an InfiniteEARTH Project, enjoy a field conservation partnership. The Reserve, ideal orangutan habitat consisting of primary peat swamp forest, was envisioned as a release site for returning rehabilitated ex-captive orangutans to the wild a decade ago. With the release of five orangutans on February 22nd the site was finally inaugurated for this purpose after many years of planning.

OFI President Dr. Birutė Mary Galdikas, OFI Release Staff, several representatives from Rimba Raya, Indonesian government officials from BKSDA , and representatives of P.T. Smart who are the sponsors of the “Friends of the Orangutan” program, were present for the release.

Imung and Jambul, two adolescent males, were released first. Imung, who was clearly eager to be back in the trees did not hesitate for a moment before leaping out of the transport cage with Jambul following shortly behind. 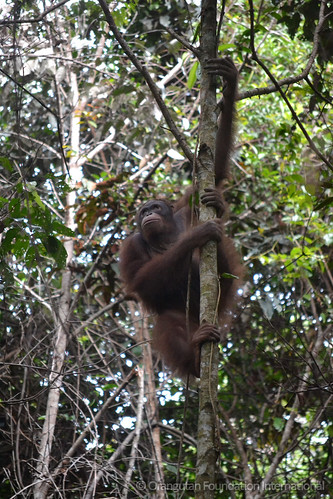 Mercedes and Imas, adolescent females, were released at a second feeding platform nearby. Both females took to the trees very quickly, without even looking at the rambutan fruit that had been laid out for them.

Joeschmick, a flanged adult male, was released shortly after the females. There was unanticipated excitement as adult male orangutan Joeschmick, seemingly confused, panicked and jumped from his transport cage, rushing into the watching crowd of people who scattered, running away. Joeschmick, incongruously named after a San Diego marine biologist who once served as a volunteer, bumped twice into Dr. Galdikas without any harm, hugged the OFI intern for a short minute, and ran around randomly without harming anyone.

Releases are always a bittersweet moment, as orangutans who have been under OFI care for many years enter a new stage of life, their true life in the forest. As Dr. Biruté Mary Galdikas quoted in a short speech before the release, “When one door closes, another door opens.”

Dr. Galdikas later commented that the interesting thing about this release was that not one of the usually food-obsessed orangutans paused even for a second to look at the fruit provided but rather went straight into the trees.