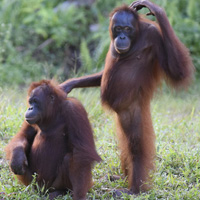 2020 has been a year of ups and downs, but among the stories of isolation and quarantine, there are those of freedom. Freedom well-earned by two orangutans, Natalie and Cantik! Cantik is an Indonesian word which in English means “pretty”. All orangutans are beautiful in their own way. It is a close contest between Natalie and Cantik as each has her own distinctive beauty. These female orangutans arrived at the Orangutan and Care Center (OCCQ) as young orphaned infants in need of love and attention. The two rapidly became firm friends both to each other and to their caregivers. Now both are on the edge of adulthood and in the wild would be consorting with males and perhaps producing babies.

Natalie was fit and healthy on arrival but Cantik needed some extra care. Cantik was diagnosed with airsacculitis. This is a clinical condition that infects an individual’s air sacs causing respiratory issues and congestion. Importantly, orangutans use their air sacs while vocalizing. OFI has witnessed this airsacculitis in a number of orangutans over the years. If untreated it can lead to potentially life-threatening complications. Some cases require surgery to help alleviate the symptoms. In 2007 Cantik underwent a necessary operation. The air sac was drained and sutured. Thankfully, she made a full recovery. Maybe it’s because of this early difficulty that Cantik now possesses a nervous energy and lust for life. Out of the two, Cantik is the decision maker, always leading the charge. Natalie has a more laid-back attitude and goes with the flow.  She happily follows in Cantik’s “treesteps.”

They both outgrew the facilities for juveniles and in recent years were housed in the main clinic. That was until the beginning of 2018 when Natalie and Cantik took the next step on their way to freedom. Staff released them into a 2-hectare sanctuary forest with a dry moat and protective wall surrounding it.  Specially constructed by OFI, this is in effect an “Orangutan Island.” Here the orangutans could be observed and assessed to see if they had the essential skills to survive in the wild. As well as having a forest to explore, the two females had flanged adult male orangutan Ricky who joined them. A feeding platform was also installed for the distribution of food. These platforms mimic the supplemental feeding platforms at the various release sites in Tanjung Puting National Park and other locations so, upon release, the orangutans readily understand their use.

Natalie and Cantik quickly adjusted to life in their new home. The active lifestyle suited them. They were often spotted together, ambling around the forest, displaying all sorts of natural behaviours from nest making to brachiating through the branches. They made up for lost time by often spending all day up the in the canopy together.

Before entering the “island” Natalie and Cantik were given birth control implants to prevent any unplanned pregnancies. Probably due to this, poor Ricky was often given the cold shoulder.  Indeed, initially the pair even ganged up on Ricky on occasion and chased him around the forest. They did learn about co-existing with other primates, though. Wild macaques and gibbons were just some of the regular visitors who passed through. Whenever there were occasional human visitors who stayed outside of the “island”, the pair poked their heads out from the bushes and walked over to the edge of the moat to gaze back at the visitors. Characteristically, Natalie normally took a seat while Cantik stayed standing ready to move at a moment’s notice. Visitors usually meant staff with enrichment items so the pair were always quick to receive any organic puzzles or treats.

After a sufficient amount of time OFI staff agreed that Natalie and Cantik were ready for life in the wild. At the end of 2019 staff finished constructing a new feeding platform on the edge of Tanjung Puting National Park. This would provide the perfect jumping off point for Natalie and Cantik to return to freedom.  In January 2020 caregivers moved the pair to the Quarantine area to prepare them for release. This included health checks and the safe removal of birth implants.

In March 2020 the release day finally arrived. Natalie and Cantik, along with another orangutan adolescent male Rimut, were loaded into transport cages. Naturally, Natalie and Cantik went into the same transport cage together. The Park is only accessible by water, so they went by land vehicles to the nearby port where boats awaited them. These boats then carried the orangutans into Tanjung Puting National Park and to the release site on the edge of the Park near Natai Lengkuas. Staff lifted the transport cages from the boats and onto the feeding platform. As soon as the transport cage door opened, the pair burst out in a flurry of activity. Natalie and Cantik leapt from the platform and into freedom. They didn’t even stop for breath as the forest swallowed them up.

After a combined total of many years under the tutelage of OFI, Natalie and Cantik gained their independence. They are now free to do whatever they choose and to live however they want. That’s what freedom means for orangutans and humans.