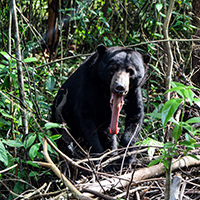 It is hard to believe that on a glorious hot day in May 2018, in amongst a quiet forest, the almost soundless patter of bear paws on leaves actually represented the culmination of months of hard work.  From their arrival at the Orangutan Care Center and Quarantine (OCCQ) in Central Kalimantan (Indonesian Borneo) on Christmas Eve 2017, four Malayan sun bears at last came to the end of a process that had begun long before.  Although Orangutan Foundation International (OFI) is an organization devoted to orangutans and tropical rain forests, nonetheless  we try to help other wildlife and animals in general.

Four Malayan sun bears had been confiscated individually by the KSDA (Nature Protection agency of the Forestry Department) in West Kalimantan – 3 females and 1 male. They ranged in age from 3 – 5 years old and had all been kept as pets prior to confiscation. Confiscation was just the first step. A new home had to be found for these former pets.  For some time the Forestry Department searched for somewhere to house these bears. Bear centers in East Kalimantan were approached but they were already so bursting with rescues that they simply couldn’t accept any more bears. A complex web of international law prevented the bears from being sent to Malaysian Borneo. The Government came to two conclusions – either a release or for the bears to be sent to a local zoo. A release would be extremely difficult as a suitable area away from humans would need to be found and even then in all likelihood these bears would not make it in the wild as they were too habituated to humans and had no recent experience dealing with wild conditions.  An approach to zoos was contemplated but conditions in some of Indonesia’s zoos do not hold up to too much scrutiny and there would be no guarantee the bears would be cared for appropriately.

For almost two months the bears had been kept in small transport cages in the middle of a Forestry Department office in West Kalimantan.  Something needed to be done, and fast. Forestry officials considered the bears’ wellbeing a top priority.  While OFI primarily focuses on orangutans (the clue is in the name) there have been many occasions when an animal in need has been brought to OFI’s attention and OFI has stepped in to improve the animal’s situation. This was one such time. An email was sent to Dr.Biruté Mary Galdikas, OFI’s President, who lives much of the year in Kalimantan near the Care Center.  Then a phone call was made to Dr. Galdikas from West Kalimantan.  Dr. Galdikas, after consulting with veterinary staff, agreed that the four bears could come to the OCCQ.  But even she was surprised by the speed at which Forestry Department officers appeared from West Kalimantan. They arrived in a flash, concerned about the bears but also happy that the transport cages for the four bears would no longer be sitting in the middle of their KSDA office with the bears vocalizing and grunting, demanding attention, food, and water and getting more and more frustrated at being kept in the middle of an office with much human traffic

Not surprisingly, the four bears arrived at the OCCQ very agitated, displaying stereotypic and aggressive behavior. They paced back and forth, snarling and swiping at anyone who came near them.  These were not happy bears! OFI staff had to show them that they were now in a safer place.

The bears had arrived quicker than expected, but plans were already in place to build brand new sleeping quarters for each bear and to attach an enclosed forest sanctuary behind the bears’ sleeping quarters. This would be a building complex exclusively for the four bears.  Dr. Galdikas and long term off-and-on bear volunteer Patrick Rouxel selected a suitable area to enclosre a fragment of forest for a bear sanctuary. But funding was needed.  Luckily, a generous donor, Leo Biddle, the founder of Borneo Orangutan Projects, as well as avid bear lover and conservationist, was able to provide much of the funding required to construct the new bear complex along with OFI.  His donation helped pay for part of the 1000 square meter sanctuary enclosure for these bears.

Work began in earnest January the following year 2017. Meanwhile the bears were housed in temporary quarters before they were moved to their sleeping enclosures. Before arriving at the Care Center none of the bears had been formally introduced to each other. It was time for the staff to get to know the bears but also for the bears to get to know one another.

The male, named Blackie, was the biggest and oldest. He would have to be housed separately from the girls to prevent unwanted pregnancies as cubs born in captivity rarely fare well in the wild.  In his transport cage he displayed atypical behavior such as standing on his head. When he entered his new sleeping quarters, he climbed up into a corner of the cage and hung there like a ninja. Anyone who approached him solicited extreme defensive behavior. He would brutally slam himself against the side of the sleeping cage.

The three girls were introduced slowly over the course of several days. After sniffing one another and sizing each other up, the three got along just fine. Younger bears tend to acclimate quickly to new surroundings. Blackie even calmed down around the females, showing much interest from his adjoining enclosure.

The bears all have distinctive personalities which have flourished since their arrival. One of the female bears has a remarkably thin “necklace” chest patch. She seemed to be the dominant character and was christened Cleopatra. Upon arrival she was also the calmest of the bears. Second was Betty, probably the most jittery of the girls, followed by Matilda. Matilda was clueless when handed typical bear enrichment such as logs or coconuts. She didn’t have the slightest idea what to do with them. The other bears ripped through the enrichment logs as though dealing with rotten logs all their lives. However, all the bears had been through much in their captivity and would need much attention and reassurance.

Cleopatra was always the first to grab enrichment, barely being able to contain her excitement as she ripped apart ant nests and logs in record time. Her excitement sometimes turned hostile towards Matilda who would hang back observing from a distance. Sometimes Matilda would move forward for a closer look, attracting Cleopatra’s ire. This animosity never lasted too long as they would then huddle together when it was time for a nap. Matilda’s curiosity and vigilance paid off. Over time she came out of her shell and learned to deal with enrichment enthusiastically.

The new sleeping enclosures were put together complete with hammocks which had been made from fire hoses, platforms, water troughs, and space enough for a barrel to provide a bath. This proved to be quite an upgrade from a small transport cage.  Next we built the forest “sanctuary,” an area of forest enclosed with a two meter high concrete fence, that the bears could enjoy all to themselves. This enclosure promised tall trees, shrubbery, and plenty of mud. A shallow pool was installed during the building process.

It took 45 days to complete the sanctuary wall. During this time the bears were moved into their new sleeping enclosures. Unfortunately, it was found that Cleopatra had particularly sensitive foot pads. She really is a Queen. The enclosure’s floor was a little rough on her soft paws causing small sores on her toes. To combat this, branches were put in daily to cushion the floor. Construction of the wall continued. Once the wall was completed, the bears could be let out into their forest sanctuary and Cleopatra’s foot problem disappeared once she had access to the soft, moist Earth.

The day finally arrived when work was completed and the forest sanctuary was ready for habitation. When it was first opened up, to everyone’s surprise, it was Matilda who led the charge. This little bear had come a long way gaining much confidence since her arrival. Betty, on the other hand, dashed in and out of the sleeping cage. It was as if she had a fear of missing out on something if she went too far into the sanctuary. This all changed later when she ended up spending the whole of her first night in the forest. Cleopatra was a little slower on the uptake, resting in her hammock inside her sleeping quarters. This changed once she entered the forest. She started making the most of it and soon found a nice little area in the forest where she could rest.

By this time Blackie had undergone a vasectomy so he could be integrated with the girls. As his circumstances improved, so has his temperament. Once he was introduced to the girls, he immediately hit it off with Matilda and Cleopatra, the three of them chasing each other and frolicking around their forest home. At first Betty was a little colder towards him but he has slowly worked his magic on her. The four of them can be found all sleeping together in a single sleeping enclosure in the morning!

Unfortunately, the history of these animals is murky at best. However, it’s highly likely that these bears have never had free access to the forest during their captivity. At first, they seemed overawed at what it all meant, but instinctively they knew this was their rightful place. It has been a long haul but being able to witness these animals begin to live a semblance of a normal life, merrily darting around their forest enclosure , was something truly special.  The forest enclosure was built for practicality, not for show. While it may not be the most aesthetically pleasing to the human eye, it opened up a whole new world for these bears, one that they will continue to enjoy as long as they stay at the Care Center.

As of today, the OFI has almost 20 sun bears. With the continuing deforestation and poaching that affects orangutans and bears alike in Borneo,  we will probably see more of these unique and lovely animals in the future.

Orangutan of the Month: Lear