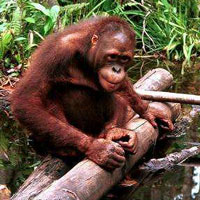 The photo on the left shows Somalia as he was when I first saw him in 1994. He had not yet been turned over to the Orangutan Foundation and you could tell how the isolation at so young an age was affecting him. I truly didn’t believe he would survive.

I had seen sick orphaned orangutans before, but always in the arms of their caretakers, those wonderful people who treat these babies as if they were their own. Dr. Biruté Galdikas “confiscated” Somalia by persuading the authorities that his life was in danger after visitors reported seeing him in desperate condition. Earlier Dr. Shirley McGreal of the International Primate Protection League who was visiting Pangkalan Bun, Camp Leakey and the Park after the International Primatological Society conference in Bali, had complained about Somalia to officials at Tanjung Puting National Park but had gotten little response. Her complaint prepared officials for Dr. Galdikas’s strong action.

The current photo of Somalia, taken in the Fall of 1999, shows that not only did he survive, he thrived, thanks to numerous caretakers who dedicated themselves to nurturing him back to health. Among those caretakers were Barbara Shaw, Bonnie Hall, David Miller, Michelle Dujmovic, Lone Nielson, and many others as well as local Indonesian assistants, Pak Sa, Pak Epeng, Pak Mekoh, Pak Sehat and others.

I can vouch that Somalia is now a rambunctious character who loves to play hard-to-get when it’s time to go back to the Care Center at the end of the day. His male caretaker cajoles in every possible way to entice Somalia down from his favorite spots in the forest, which always happen to be up a tree just out of reach of his caretaker!

Since Somalia seems to be less obstinate with females (the human kind), I said I’d try to get him down, using fruit as encouragement. It worked, but if you ever try to piggyback Somalia while trying to walk on logs stretched over the swampy water (not a strong point of mine!), I suggest you steer clear of the trees. Somalia cooperates only until he can reach out to the next tree, naturally taking the fruit with him.

Finally, after two or three “ups and downs” we reached the end of the forest where he quickly scrambled down and disappeared into the tall grasses. His caretaker, who had stayed out of sight behind us, was sure he would head back into the forest. We decided to continue on to the Care Center and decide from there where we would begin to search for him again. As we neared the Center, who was waiting for us but Somalia, with a look that to us seemed like he was saying, “What took you so long?”!

What a wonderful experience to see him so active after such a rough beginning, and to know that in some small way, being a member of the Orangutan Foundation International, helps Somalia and the many other needy orangutans. If you’re not yet a member, please join soon.

The Story of Sun Bears Bernie and Wawang