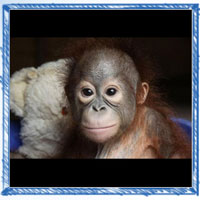 Sharon and Marty Kimmel visited Tanjung Puting in 1998 and photographed a number of the orangutan residents of the Park. They provide this month’s “Orangutan of the Month”- Rosemary, a former Camp Leakey orphan who was later transferred to the rehabilitation station at Tanjung Harapan, and then to the station at Pondok Tanggui.

“We were worried for Rosemary from the first moment we saw her at a feeding station at Pondok Tanggui. It had been pouring rain and she was wet and exhausted. Her right eye appeared to be injured. She came swinging down from the trees to the feeding station with a newborn baby in her arms and another young baby following her. The baby she was carrying was the first she had ever given birth to, although she had been known to raise and care for many orphans. The baby following them was one of these orphans. Rosemary could not fully take care of both babies. While she moved through the forest carrying her own baby, the orphan would cry and have great difficulty keeping up with them. Everybody was concerned for the adopted baby’s well being. That was the last time we saw Rosemary and her babies.”

Mrs. Barbara Shaw, Mr. David Miller, Mr. Joel Meadows and myself arrived at Pondok Tanggui on Saturday, May 8, 1999 – along with Mr. Yatno of course. Rosemary and her two babies greeted us upon our arrival. They were in trees next to the dock – Rosemary & her baby (a little boy) were in one tree, and her adopted son was in the one next to her. Rosemary was moving among the trees to get closer, and he was trying to catch up to her, and kept whining until she finally stopped. When he simply couldn’t reach the tree she was in, she held out her hand so he could grasp it and pulled him to her. They all three came on to the dock, and were given bananas and pineapples. The little one was rather reluctant to let go of Mom to get his own food, and kept a pretty tight grasp of her.”

“After a while, Rosemary wanted to get closer to the boat, as I’m sure that promised even more food and fun, so she worked her way around the dock from tree to tree to the front of the boat, but Mr. Yatno kept guard and thwarted her plans. So, she and the baby settled in a tree just over us, while her older son (I can’t remember his name) stayed as close as he could to her. She was still pretty patient with him, as she waited each time he whimpered if she moved out of his sight.”

“Mr. Yatno indicated to us that they hadn’t seen Rosemary in quite a while, and wasn’t sure if the baby was a boy or girl. He’s a very healthy looking guy, and his Mom has a very sweet disposition. Joel & I actually saw Rosemary for the first time two years ago at Pontok Tanggui when she only had the adopted baby. It was wonderful to see her again.”

Orangutan Of The Month: Enigmatic Nawi