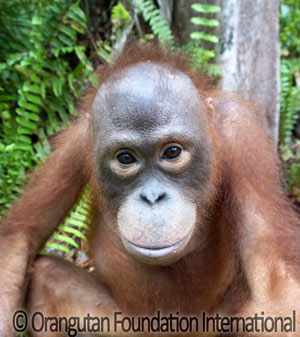 Mimi first arrived to the Orangutan Care Center and Quarantine many years ago as a young baby. Her bright and friendly manner immediately captured the attention of both the Care Center staff and volunteers. 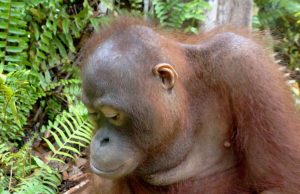 Initial field notes on Mimi’s condition reported her “silly” nature and cute, little, pot belly. But the shock of Mimi’s rapidly changing environments soon began to wear on her. As is not uncommon for young orangutans who have recently lost their mothers, Mimi began to exhibit signs of depression. First she lost her appetite and then, in time, her hair.

Depression and illness are an unfortunate reality in orangutan rehabilitation. We can only guess the extent of the trauma these ex-captive orangutans have witnessed in their short lives. It is heart-breaking to know that small and sweet Mimi had already endured so much pain, but we knew from experience to take her change in behavior seriously. Mimi was placed on a special diet and given extra time outside her sleeping enclosure. Orangutans in the wild cling to their mother for the first years of their life. So when a young orangutan falls ill at the Care Center, tender love and care is often the best medicine. 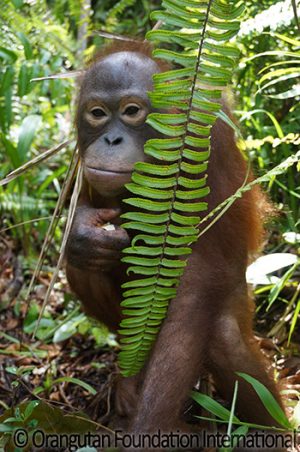 It was a slow journey for Mimi but in time she began heal. Her body put on weight and her hair grew back in soft orange wisps all over her body. The best part? Her happy-go-lucky attitude returned in full force. To see Mimi today, it would be hard to imagine this cheerful girl was ever feeling down.

The first time I met Mimi, I was struck by her easy presence. Her round face and soft eyes seemed to always hold a gentle expression that made me feel immediately at ease in her company. I imagined the daily forest release with her would be something of an uneventful affair. She would probably spend most of her time quietly foraging. Perhaps we’d sit together under the shady canopy. I was completely unprepared for the power-house of energy Mimi and her friends unleashed when released during the day!

On the backs of their caregivers Mimi and her three sleeping mates Mendru, Sinta, and Glenda, are carried into the forest. The moment they arrive, all four orangutans immediately scatter in different directions as though about to burst with excitement. Frantically they explore the forest like a group of school children let loose at an amusement park. It is during this time that Mimi shows off her short attention span. Nothing seems to capture her interest for more than a few minutes at a time. One moment she is at your side, the next she is up a tall tree, and another minute later she’s back on the ground bathing in a puddle. She finds it particularly thrilling to lure the caregivers into a game of cat and mouse. They try to keep track of her but she is always on the move! Mimi clearly relishes exploring every single inch of the OFI enrichment forest. 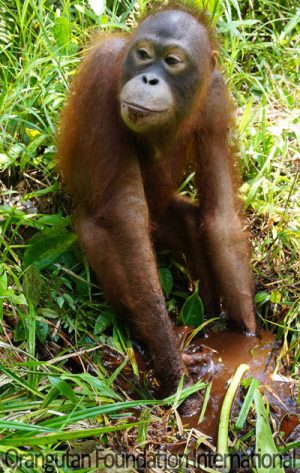 It isn’t until after the initial excitement simmers down that Mimi and her friends get to work on their favorite activity, nest making! They are, simply put, nest-making machines. All four of them seem to be in competition as to who can make the most nests throughout the day. By bending thin branches and cushioning the interior with soft leaves, orangutans can make pretty cushy beds for themselves up in the tree tops. It is a big part of orangutan behavior and an essential factor we examine when assessing an orangutan’s rehabilitation progress. Mimi can definitely make a nest but she isn’t satisfied with building just one. She will go on to make one after another after another. It is the only thing that seems to genuinely hold her attention. Sometimes she and all 3 of her friends will be in separate trees making nests all at the same time! It is quite a sight!

During these continued periods of nest-making, a forest release with Mimi can feel a bit like bird watching, in that you spend most of your time craning your neck looking up into the bushy canopy to spot a brightly colored animal. And like a bird, Mimi is just in her nest! In fact, the best way to follow Mimi in the forest is to listen for the sound of cracking branches and rustling leaves, the tell-tale sign of another nest being made. Mimi will often inspect her friend’s nests by sitting down in one for a minute or two before switching to the next one. Like a little Borneo Goldilocks, she’s looking for a bed that’s just right! 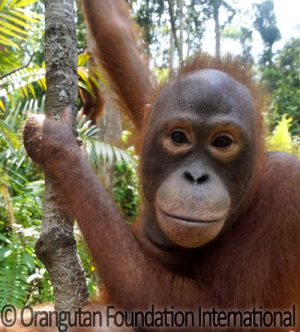 In addition to her spontaneous nest making, Mimi has displayed an array of impressive forest skills to the staff, proving her capabilities to fend for herself in the wild. This bright, curious girl has come a long way. She is endlessly full of surprises and positive energy making Mimi one incredible orangutan! When her time for permanent release arrives, I know this sweet girl will just light up the forest!

Orangutan of the Month for Sept, 2017: Karaba

Orangutans of the Month June and July 2020
NATALIE AND CANTIK: THE ROAD HOME