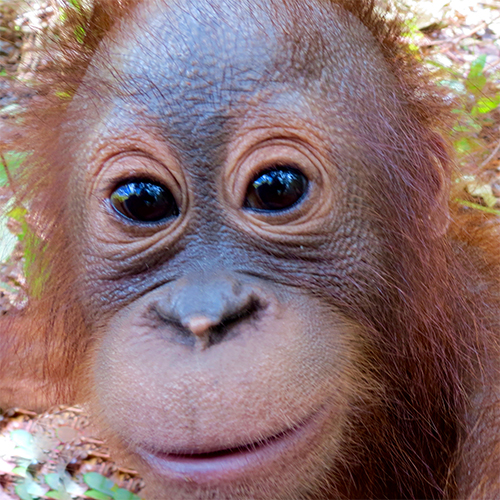 Each orphaned infant orangutan at OFI’s Orangutan Care Center and Quarantine (OCCQ) copes with the traumatic loss of their mother in his/her own way. But the most common behaviors we see fall tend to fall under two categories: 1) displaying a lack of confidence and seeking constant support and reassurance from caregivers or 2) displaying a dramatic assertiveness or even aggression and a desperate need for any kind of attention. Both reactions are understandable and predictable.  It is rare, however, to find a recently orphaned infant orangutan who carries herself with the kind of calm, gentle confidence that Mara does.

When Mara arrived at the OCCQ, she was estimated to be around two years old. She’s a beautiful young orangutan with blondish hair on her back and sides. The circle of pale skin that orangutan infants have around their eyes is more of an oval shape in Mara’s face, extending higher up on her forehead than usual and giving her a permanently innocent and interested look. 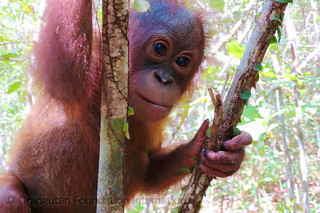 I first noticed Mara during a daily release trip to the Learning Forest, where infant orangutans are given an opportunity to explore in a protected environment and develop the skills they will need to survive in the wild.  All the other orangutans were either energetically climbing and playing or else clinging to the side of a caregiver. Mara sat silently on the edge of the group, digging in the soil, chewing on soft bits of bark she discovered there, and keeping a casual but curious eye on the goings-on around her. The self-assured, serene aura around Mara put her in stark contrast with most of her peers. I was captivated.

This was the first of many times that I saw Mara digging in the dirt, and I suspected that she was emulating a foraging behavior she remembered from her mother. But as with many proto-foraging behaviors in young primates, Mara’s digging is often more playful than productive. I have frequently observed her slapping down dirt and leaves onto her head with a somewhat serious air. It is hard not to be charmed by her odd form of solo playfulness. 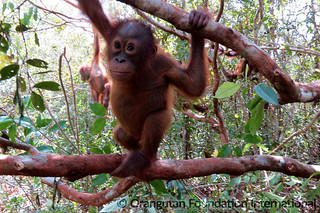 Mara’s goofy habits mean that she spends a lot of time contentedly exploring on her own, much like an adult orangutan would. She does not often seek out interaction, but she is not timid. She accepts the playful advances of other infants and is not afraid to engage in wrestling matches with those older and bigger than her. In particular, Mara’s outgoing side shines through in her compassion. She closely examines and grooms the small wounds on her fellow infants’ bodies and faces.  She has even been seen giving them kisses on the forehead. She is particularly close to little Panahan, another female infant who is around the same age and arrived around the same time. Mara is a leader who spreads a sense of calmness and peace throughout the group.

Mara has many challenges ahead of her and much progress to make in order to succeed on her own in the wild. But with continued support from donors and OCCQ staff, her quiet, resilient spirit will surely prevail. I do not doubt that Mara will multiply the support and love she receives to the benefit of the others in her cohort, pulling everyone along the road to recovery and eventual repatriation in the wild. She is truly a remarkable little orangutan!

Tags: OCCQ, Orangutan of the Month

Orangutan of the Month for Feb 2017: Penelope Cruz