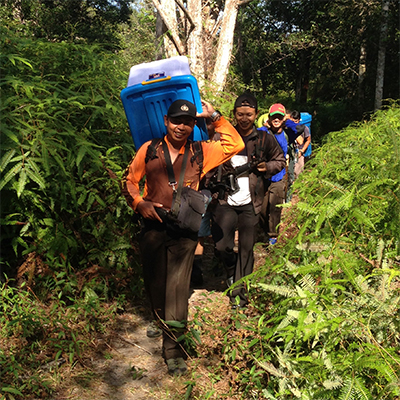 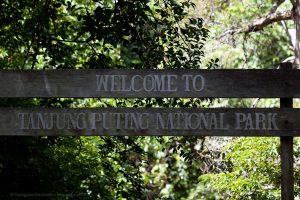 Tanjung Puting National Park in Central Kalimantan is comprised of over one million acres of mangroves, black water rivers, tropical heath forest, and peat swamp forest that form precious habitat to the largest population of wild orangutans in the world and an immense diversity of other flora and fauna. But this international treasure is surrounded by palm oil plantations and expanding human communities, increasing the danger of agricultural encroachment, forest fires and poaching. For decades, Orangutan Foundation International (OFI) has worked hand-in-hand with national park authorities to protect and patrol Tanjung Puting. To date, OFI has built and staffed eighteen guard posts in strategic locations. Maintaining all of these posts and teams of patrollers is costly and OFI has occasionally decommissioned an established guard post once the area was considered secure in order to respond to a current threat elsewhere, but recently it has become clear that one of OFI’s inactive posts is in urgent need of being revived. The process of restoring the post and renewing patrols has so far shed light on the sort of special collaboration of diverse individuals that fuels OFI’s successes. 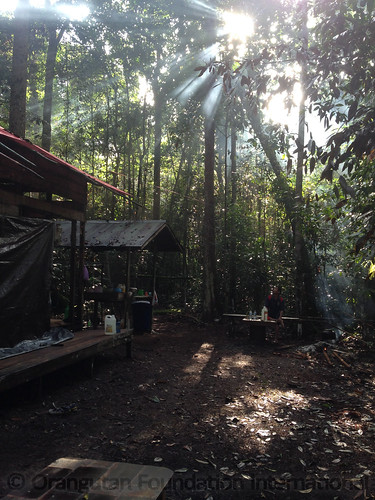 Post 17 is located at the very edge of the Camp Leakey study area, about a two hour walk from the main camp. It was established in 2002 in response to heavy illegal logging that was taking place in the national park at the time. Several years later, once it appeared the illegal logging problem had died down, OFI discontinued patrols based out of Post 17 to focus resources elsewhere.

Research assistants at Camp Leakey seek out and follow orangutans every day, occasionally ranging as far as the old Post 17 site, where they discovered increasing signs of intrusion; the trails are well-worn (despite the fact that Camp Leakey staff only very occasionally use them), bits of trash have been left along the trails, machete marks have been made on trees, and at Post 17 itself the old walls are covered in graffiti, the floors burnt through, and ramen packets litter the ground. Whoever is illegally entering this section of the national park may be taking part in a variety of extractive activities, but we can confidently say (based on discovered traps) that one of those activities is the capturing of live birds to sell into the pet trade.

Almost any tourist in Indonesia could tell you about the exotic birds that can be seen and heard from cages hanging outside homes. In some areas they are thought to bring the families that own them good luck. Some birds are bought for their magnificent plumage, others for their beautiful songs. But the markets that sell the birds are supplied by poachers who have extracted the birds from the wild to be sold into a domestic life where they cannot engage in most of the behaviors they are biologically wired for, like complex social interaction, flying, foraging, and raising young. And beyond the harm done to the individual birds, the decline in wild populations has reverberating impacts on rainforest ecosystems. Birds play a crucial role in seed dispersal and pollination, key endeavors to keeping rainforests growing and functioning. When bird populations suffer, so do orangutans and the other species that coexist with them. Besides, it is likely that the poachers extracting live birds are also taking (dead or alive) other species they encounter along the way.

When it came time to decide on a project for the 2016 volunteer construction teams to undertake this July and August, it was clear that rebuilding Post 17 was the area of most urgent need, and could provide opportunities not only for renewed protection, but for expanded research as well.

Thus, in early July, the first team of construction volunteers and hired Indonesian carpenters loaded a boat full of wood and headed out to Camp Leakey to devote themselves to three weeks of carrying hundreds of planks through the forest. About two weeks into the journey, enough wood had made it close to Post 17 that the carpenters anticipated people would soon be able to start staying on-site and beginning construction. In preparation, they rigged up a giant protective tarp over the frame of one of the two dilapidated buildings. Two days later, they returned to find the tarp cut down and stolen, and new graffiti decorating the walls. Everyone – carpenters, volunteers, and Camp Leakey staff – was alarmed by this development. As soon as Dr. Galdikas found out, she immediately alerted police and national park authorities, and mobilized a team of rangers chosen from various remote OFI patrol stations to come out and start work at Post 17.

The first OFI patrol team of four men – Pak Hadli, Pak Ayan, Pak Sabran, and Pak Alip – arrived at Camp Leakey near the end of July. Volunteers and Camp Leakey staff helped them carry out a very basic set of camp supplies to Post 17. All four men had previously lived and worked at Post 17 at some point in time but had not returned to their old home for several years. When the group arrived at Post 17, the four of them took a moment to take it all in. Pak Ayan, with a huge smile on his face, remarked in English, “Many memory here,” and then, joking, “Many lonely here.” Years ago, he lived at Post 17 by himself for seven months. The rangers tested the strength of the remaining structures, assessed the nearby stream as a washing spot, and continued reminiscing on their past lives here. Pak Sabran even found an old barbell that he had fashioned out of scrap wood years ago! Their excitement at returning to Post 17 was tangible. In the days that followed, Pak Ayan discussed with volunteers his gratitude to Dr. Galdikas for re-opening Post 17 for patrols, because it upset him to see the forest and animals he loved being exploited. When introducing himself and explaining his job to new people, he made sure to say, with his characteristically infectious smile, “I am always happy in the forest.” All four of the rangers went about their work eagerly and proudly. It didn’t take long before they started catching poachers. They took down their names, documented their identities and activities through photos and videos, disassembled their shelters, and educated them on the law and the damage they were doing to the forest. Upon returning to Post 17, the rangers were always eager to show evidence of their day’s achievements. 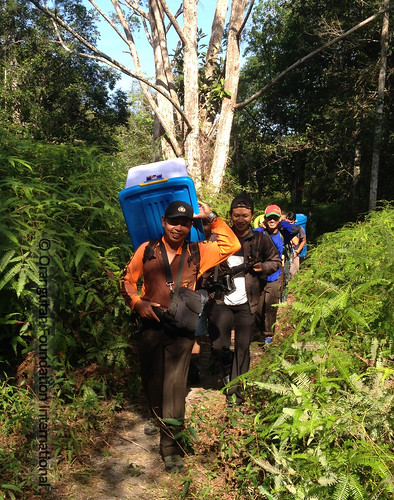 It wasn’t long before the police and national park officials had arranged a team of their own rangers to join the effort at Post 17. Dr. Galdikas accompanied the first rotation of police rangers out to Camp Leakey to discuss their mission and help get them acquainted with the area. The police immediately joined in on patrol shifts with the OFI staff and adjusted well to the rudimentary camp lifestyle. After ten days, their rotation was over, and soon afterwards another group of police arrived. On this second team’s first trek out to Post 17, they joked and laughed continuously, explaining to volunteers that they believe it’s important to always find reasons to smile and maintain “semangat” or good spirit, in order to fare well in the remote forest lifestyle.

The zeal with which the rangers and police threw themselves into renewing efforts at Post 17 set the stage for a continued joyful collaboration between them, Camp Leakey staff, and the construction volunteer teams. By the start of the second construction team in early August, all of the volunteers were staying at Post 17 overnight. When not on a patrol shift, the rangers helped out with camp maintenance, wood carrying, or construction. Volunteers and rangers worked and joked hand-in-hand during the daytime, played card games together in the evening, and slept in close quarters on wooden floors or in hammocks at night. All were devoted to this rudimentary lifestyle and committed to the mission of protecting the beautiful, wild sanctuary that is Tanjung Puting.

Re-establishing Post 17 has been a serious undertaking and financial commitment for OFI. Going forward, we will need to continue devoting significant resources to the upkeep of the post and funding of police and OFI patrol staff. The project can only truly succeed in a sustainable way with continued support. Join in on the collaboration!

Read more about the complexities of forest protection in Tanjung Puting National Park.

Help this field operation succeed by making a donation to OFI.