The Troubled History of Forest Protection

As one of Indonesia’s most famous national parks, it would be natural to assume that the protection of Tanjung Puting National Park (TPNP) is assured. Unfortunately, like many national parks in Indonesia’s sprawling archipelago, Tanjung Puting has been the victim of illegal logging, forest conversion, illegal palm oil cultivation, fire, and border disputes with local people, and jurisdictional disputes among government departments. 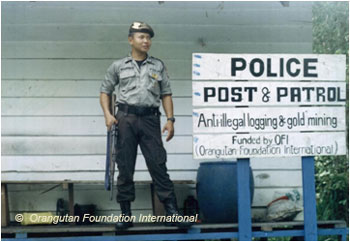 One of a team of police officers helping patrol the Park with OFI at the height of the illegal logging.

The designation of any area of land as a national park effectively recognizes, and aims to protect, the area’s threatened wildlife, biodiversity, and its ecological and economic benefits to local people. National parks fall under the jurisdiction of the Ministry of Forestry, and represent the highest level of protection afforded to any area in Indonesia. National parks also represent protected areas with high profiles. The status of national park is usually awarded to areas of high biodiversity, beauty, and international interest.

The challenges faced by Orangutan Foundation International (OFI) and other NGO’s helping to protect national parks in Indonesia were exacerbated historically by the epidemic corruption and cronyism of the President Suharto era, and later by the widespread lawlessness and political instability that followed his resignation in May 1998 after 31 years of dictatorial rule.  More recently, economic concerns have become paramount and local government decisions are made increasingly with economics, and not conservation, in mind.

“A study done in 2000 by the Indonesia-United Kingdom Tropical Forest Management Programme concluded that 73% of logging done in Indonesia was illegal. ”

In 1967, President Suharto issued a law appropriating all forest lands in Indonesia for the state, effectively disenfranchising the country’s millions of forest dwelling people, and robbing them and local villagers of lands that would traditionally have been theirs. This forest was then carved up into concessions and handed over to Suharto’s coterie of family members and business associates, leaving local people looking on as their forests were plundered and billions of dollars made their way to private hands in Jakarta. Although these activities were riddled with illegalities, and the Ministry of Forestry’s own figures show that, in 1993, 84% of concession owners were breaking the rules, Suharto’s ability to control much sociopolitical and economic activity in the country essentially made the operations legal.

At the same time, Suharto, who considered himself a conservationist, set up a series of national parks throughout the country, both in a genuine bid to protect the nation’s natural areas and in recognition of the symbolic significance of national parks, particularly internationally. While some effort was expended to protect national parks, nonetheless, unprotected areas were illegally logged with impunity. 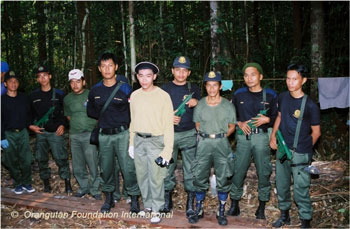 After massive student riots, forest fires and the Asian economic crisis, Suharto was forced to resign in May 1998. The vacuum created by his resignation plunged the country into uncertainty and chaos. Local people in Kalimantan and other areas, who had looked on for decades as their local forests were plundered, began taking what they believed was theirs. National parks were now fair game. All parks and protected areas in the country were overrun with illegal loggers. It was, as Dr Biruté Mary Galdikas put it, the “revenge of the little people’.  At the same time, local timber barons emerged, taking advantage of the lawlessness to establish regional timber empires, often in co-operation with military and local authorities. It is estimated that in 1999, 80% of all timber production in Central Kalimantan, the province where OFI works, was illegal, and it is likely that $120 million worth of ramin, a valuable peat swamp timber,  was removed from Tanjung Puting in that year alone.

In the new spirit of democracy, the new central government in Jakarta embarked on a program of decentralization. A 1999 law passed management of natural resources to regional and provincial governments, although kept overall management of national parks under the Forestry Department. in Jakarta  The conflict and contradiction this directive caused has been a problem ever since, as national government policy has been undercut by local government corruption and need for revenue.

It has been against this backdrop that Dr Galdikas and OFI have fought to protect Tanjung Puting National Park, its 400,000 hectares and 6.000 wild orangutans, for the last 40 years. It has not been easy work. During the Suharto era, the national government was largely supportive of the park and the presence of a high profile researcher and a lucrative tourism industry saw them enforce protection of the Camp Leakey study area. Illegal logging inside the park was well concealed and predominantly carried out by small groups of local men. Despite incursions, until the mid 1990’s, the park remained substantially undisturbed. 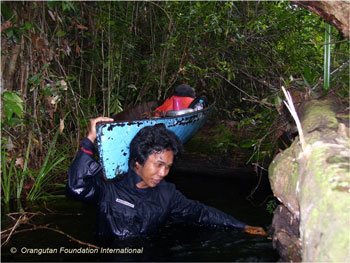 An OFI ranger, up to his armpits in the swamp, tows his dungout behind him as he patrols Tanjung Puting National Park

The huge fallout of Suharto’s resignation changed that. Parts of Tanjung Puting were quickly overwhelmed by illegal loggers, and even a small portion of the Camp Leakey study area was briefly invaded by loggers. Local men and migrants, most working for the new regional timber barons, kidnapped and assaulted two environmental investigators, while an American proboscis monkey researcher was forced out of the park by local people.  During these difficult times, OFI, working with the local government, took over co-management of the park, establishing guard posts, evicting illegal loggers and poachers, and establishing fire fighting teams. A community development program was established with Boston-based World Education to educate local villagers on sustainable farming techniques, and OFI assisted the local government in distributing rice to villagers after the rice crop failed. These projects, growing stability throughout the country, and continued support from the national and local governments helped bring illegal logging under control in the Park. But much damage was done, particularly in the southern areas of the Park where OFI and the Park authorities did not have much presence due to distance and inaccessibility.

There are, however, still massive threats to the park, which OFI is fighting every day. Palm oil plantation expansion along the parks northern border has almost destroyed all the forest in the parks buffer zone and OFI has begun a project to stop the same thing happening to the parks eastern buffer zone. Forest fires remain a constant threat, and saw OFI’s firefighting team battling fires in the south of the park in 2009.

The policy of decentralization has also brought up land use disputes between the national and local governments. Tanjung Puting, National Park, which is divided between two regencies in the province of Central Indonesian Borneo, was extended in both 1977 and 1996. The national government recognizes the 1996 borders of the park, while the local government, keen on the revenue provided by palm oil plantations, is lobbying for the eastern border of the park to be recognized based on the 1977 map. If the local government is successful, the size of Tanjung Puting could be slashed by 25%.

The pressures faced by national parks and forests in Indonesia have never been greater. It is hoped that, with greater worldwide attention being paid to the issue, the increasing stability of Indonesia’s still new democracy and the support of local and national governments , Tanjung Puting and all national parks can be saved for all time.

Read about our Forest Patrols in Tanjung Puting National Park