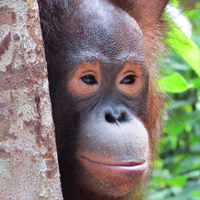 Without a doubt my favorite time of each day at the Orangutan Care Center and Quarantine (OCCQ) is seeing the orphaned orangutans climbing and swinging in the Orangutan Foundation International (OFI) Learning Forest in Borneo. Seeing these magnificent creatures in the trees, where they belong, is something to look forward to every day. 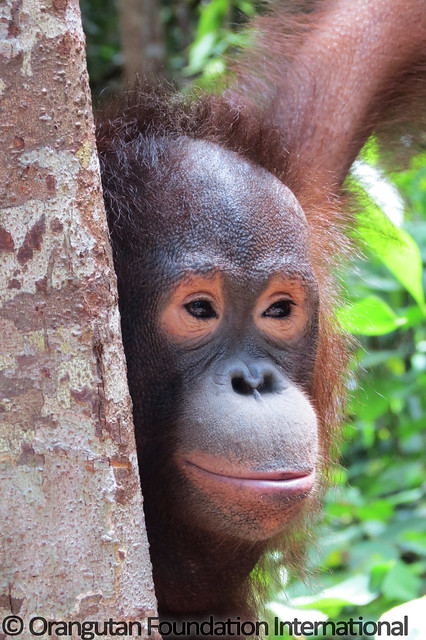 The infant and juvenile orangutans might not be ready for release back into the wild, but they get to spend their days learning new and vital skills in the forest canopy. I love watching the orangutan youngsters at play. On one of my last days recently spent at the OCCQ, I was in the OFI Learning Forest with juvenile female orangutans. After almost a year spent off and on in Borneo I was quietly confident that I could recognize most of the orangutans in the play group. I was gazing into the treetops when a hand pushed my leg aside and a juvenile orangutan walked past me on the path. She climbed into a tree a few meters away and started foraging for leaves. I was puzzled. I had no idea who she was. I asked the OFI staff who the orangutan was and they smiled and said “Who else? Lumley, of course!” As I gazed up at this confident orangutan climbing in the trees with her lush hair glowing in the sun I couldn’t believe it was Lumley. There was no way this could be the shy and scared orangutan I had met two months earlier. Yet here she was, without a care in the world, just doing her thing, climbing and brachiating in the tree tops. In the forest, Lumley comes alive! If you met her in her sleeping enclosure for the first time, she would be almost literally unrecognizable when you next saw her in the trees. 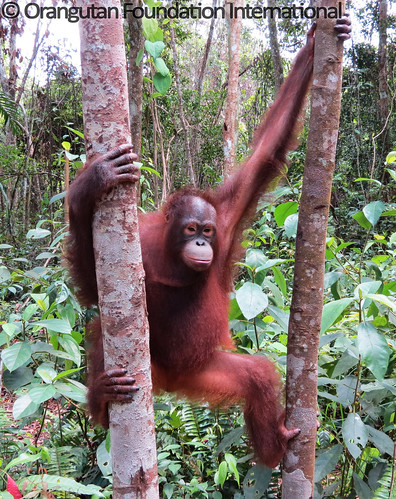 I first met Lumley when she was transferred to the Clinic at the OCCQ. Previously Lumley had been located at one of OFI’s soft release field camps. When she came to the OCCQ, Lumley was afraid of most people and emitted a high pitched squeaking sound whenever you were too close to her sleeping enclosure. I could feel how traumatized she was and wanted to try to make her feel more comfortable and less anxious. For the first few weeks, every time I walked close to Lumley’s sleeping enclosure, she would kiss squeak and rattle the sleeping enclosure. When orangutans are frightened or angry, their skin will become covered in goose bumps and their hair will stand on end. Lumley’s hair was always standing on end when she saw me. Just like people, orangutans can look at you and instantly decide they do not like you. There is nothing you have done wrong per se. They just decide they don’t want to be near you. I had a feeling that this was not the case with Lumley. Her behavior felt more like that of a traumatized orangutan who was scared to trust anyone. Besides, there was something special about this juvenile orangutan with her short, spiky hair and big round belly. I decided to persevere.

Over the coming weeks I made a point to walk past Lumley’s sleeping enclosure every day. I called to her softly and told her how beautiful she looked. She responded by rattling her sleeping enclosure and throwing fruit peels at me. The orangutan in the sleeping enclosure next to her, a juvenile male named Saddam, liked to play hand-clapping games. Whenever I played this game of slapping hands together with Saddam, Lumley would look on. 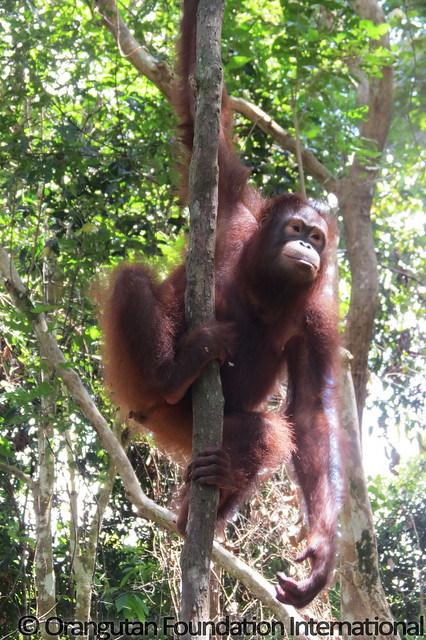 One day I noticed that Lumley wasn’t vocalizing as much as usual. In fact, I noticed out of the corner of my eye that her arm was reaching tentatively out from her sleeping enclosure in my direction. I turned my head to look and Lumley instantly pulled her arm into her enclosure and turned her back on me. A few days later I tried again, and this time when I saw Lumley put her hand out, I didn’t turn my head. Instead I slowly reached my arm out towards her. Lumley quickly withdrew her arm but then, slowly put her arm back out and ever so lightly brushed her fingertips against mine. It was a special moment for me and seemed to break the ice with Lumley. From then on, Lumley slowly began to come out of her shell and stopped voicing her displeasure whenever she saw me. One day, Ibu Tuti had just finished her afternoon round of giving milk to the orangutans. She came up to me laughing and said I had to go and see Lumley as she was being really funny. Lumley had just finished drinking her milk and her belly was full. I walked past her sleeping enclosure and noticed her patting her stomach. I went up to Lumley as she contently slapped her hands onto her stomach. Lumley suddenly stopped, put her head to the side and gazed at me. I took this as an invitation and started to drum on my stomach with my hands. I stopped and Lumley started patting her stomach again. We stood together patting our stomachs one after the other for about ten minutes and then Lumley lost interest. To have gained the trust of such a frightened and untrusting animal to the stage where we could understand each other and play was magical.

Lumley the orangutan was named after the English actor Joanna Lumley, known for her role as Patsy Stone in the television series, Absolutely Fabulous. The minute I found out that Lumley the orangutan was named after Joanna Lumley I just knew that there was something extra special about Joanna Lumley. I came to realize that Joanna was not only a talented actor, but she was also passionate about different causes, including conservation. Some years earlier Joanna Lumley had traveled to Kalimantan to film a documentary with Dr. Galdikas called ‘Final Chance to Save the Orangutans’. 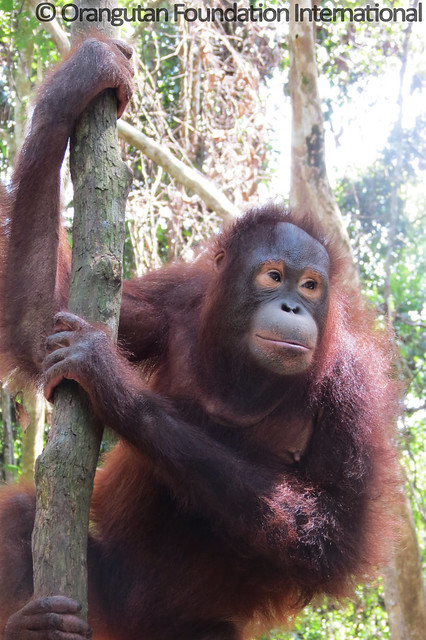 Lumley taught me much about orangutans. Prior to Lumley, I had not felt compelled to reach out to any orangutan who didn’t like me. I didn’t take it personally. Yet with Lumley I sensed there was something different, that she had a great spirit under her outer shell, a shell that just needed to be cracked for that spirit to be revealed. Once she opened up, Lumley would make me laugh every day with the things she did. She loved playing the hand slapping game and would often share one of the branches she was using to make a night nest in her sleeping enclosure. On occasion she would offer me a branch by trying to slap me with it. Once she became used to me, there was always a twinkle in her eye. Some days we would both shake our heads to the side and make funny sounds. Like her namesake, Lumley the orangutan is kind and yet very determined at the same time. Lumley is quite the character when she wants to be and I am so glad that I was able to get to know her. Lumley transforms when she is in the OFI Learning Forest. It is the highlight of her day. I cannot wait for the day when Lumley is swinging free in the trees once more, back in the great forest where she belongs.