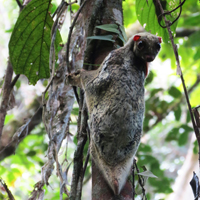 We had been driving for hours through palm oil plantations, desperately seeking out patches of protected rainforest we had been told existed but somehow could not find. At top speeds we flew blindly through the dust of cars in front of us, weaving across the broad dirt roads to avoid potholes or overtake giant tank-like vehicles (carrying crude palm oil) that looked like they belonged in a post-apocalyptic warzone.

Logging trucks loaded down with lumber passed us going the opposite direction, only heightening the sense of urgency in our search. Whenever the dust didn’t clear fast enough for the driver to see a pothole or bump in the road, my head hit against the door, my stomach lurched, and I more acutely felt the heat and dehydration. Our car was silent. We were all resigned to the road, to the carsickness, to the exhaustion, to the bewildering scenes that flashed by every time the dust cleared enough to see out the windows. The protected forests were out there somewhere. We had maps, we had directions from local authorities, we had GPS experts, but we got so lost in the palm oil plantations that we just couldn’t find them… 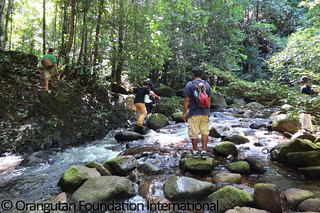 On my second day back in Borneo after over three-and-a-half years away, I was invited to accompany Dr. Galdikas and a team of expert Orangutan Foundation International (OFI) staff on a four-day trip into the Lamandau Regency of Central Kalimantan, which is further towards the interior of the island than most of OFI’s usual field operations. The team had two main aims: to assess the suitability of protected forest in the regency for releasing rehabilitated orangutans, and to meet with local authorities to discuss the possibility of OFI helping to develop ecotourism initiatives around those protected forests. After so much time away, this trip was a rude re-awakening for me. It highlighted just how grave the prospects for orangutan conservation currently are, but also gave insight into what is needed to forge forward on a seemingly hopeless mission.

Our expedition started smoothly. We had three cars packed full with a diverse, capable team of OFI Indonesian staff – including research assistants from Camp Leakey, GPS/GIS experts, and managers from OFI’s office in Pangkalan Bun and the Orangutan Care Center and Quarantine in Pasir Panjang. The first leg of our journey took us to the lavish office of the bupati (head) of the Lamandau Regency, where Dr. Galdikas laid out the team’s plans and aspirations. The bupati was supportive and suggested areas to search, even drawing up a map for reference. Upon leaving the bupati’s office we immediately set out for one of the areas he had indicated, which was up in the mountains. As we ascended the hilly landscape, I got a view of palm oil plantations like I had never seen before. Driving on flat land for hours through palm oil is one thing, but seeing it from above, extending all the way out to the horizon at some points, is quite another. It was sobering to say the least. Dr. Galdikas commented sadly that fifteen years ago it had all been rainforest. 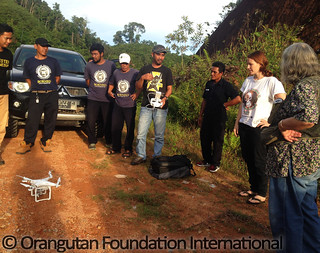 After a few hours we arrived at our destination and met with the local village chief, who was welcoming but wary of outsiders. He arranged for prominent community members to accompany us the next day, when the team set out to survey an area of community-managed protected forest. The Camp Leakey research assistants searched for signs of orangutans and every now and then excitedly stopped the group to point out sleeping nests high up in the trees. The GPS/GIS experts marked important features along the way and utilized a drone to get an idea of the overall forest coverage and land use. The local community representatives explained how the forest was demarcated and utilized, and what the potential plans were going forward. The divisions between different patches of forest were stark. In the area of forest that was currently being used fairly heavily by the local community for fruit production and other extractive activities, bird songs were few and far between. For at least an hour we neither heard nor saw anything noteworthy. But as soon as we crossed into the forest that the community was preserving for potential future use, we encountered several orangutan nests, occasionally heard the calls of hornbills and gibbons amidst the constant roaring of cicadas, found the forest floor to be littered with fruit remains, and even encountered a colugo – an elusive, nocturnal gliding mammal. It felt like real rainforest.

But between the hesitance of the local community to encourage outsider activity in their area, the difficulty in accessing the more flourishing patch of rainforest, and the unknown nature of the community’s future plans, the OFI team left the area unsure of how well their ambitions would fare there. 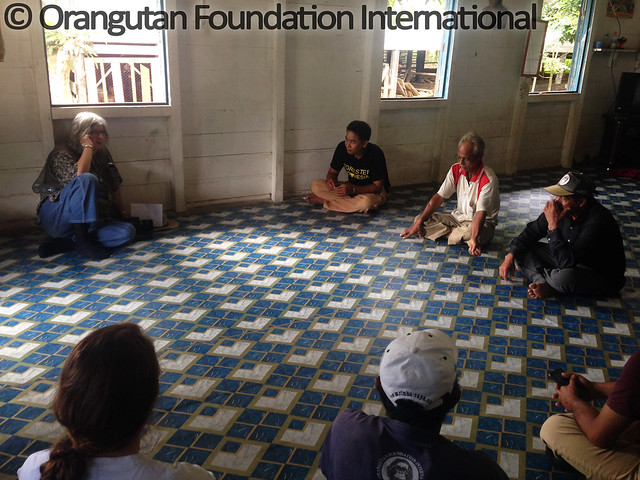 The next two days were a blur of palm oil plantations and dust as we sought out another protected forest we had been directed towards. At one point we finally found it, but it was on the other side of an immense river, and we had no way to get across. Hours of backtracking and trying a different route were unsuccessful. I started to allow self-pity to seep into my thoughts – because of the carsickness, the sore back, the monotony of hours in the car. On the last night of our expedition, after having spent over ten hours on the road, we found ourselves enjoying the hospitality of a family in a small, very remote community. After eating and bathing in the nearby river, the exhausted team was quick to fall asleep – some on the family’s kitchen floor, some inside the cars, some in hammocks under the clear night sky. Dr. Galdikas, her husband Pak Bohap, and I all wound up on the wooden front porch. I mustered up as much comfort for myself as I could; I carefully chose a spot where I thought I wouldn’t be too bothered by ants, laid out my yoga mat and dusted it off, unrolled my camp pillow and fluffed it up, and reclined with a satisfied sigh under my sheet. I rolled on my side and looked over towards Dr. Galdikas. She had no mat, pillow, or sheet. She lay on her side on the wood, her arm propped up as her pillow. This struck me, hard.

At seventy years old and after spending over half of her life working hands-on in orangutan research and conservation in Borneo, Dr. Galdikas is well within her rights to become an armchair conservationist and enjoy a more comfortable lifestyle. But she doesn’t let her age hold her back from being in the midst of the action, wielding her knowledge and influence for the benefit of orangutans, and always fighting for new solutions. And it’s not only her age that she disregards. At the outset of this trip Dr. Galdikas was just two days out of the hospital after a bout of viral pneumonia. She still had bandages from the IVs, and she was supposed to be using an oxygen tank at night. Yet on that second day she trekked for hours into the mountainous forest to take part in the survey. And there she was on the final night, sleeping on a bare wooden floor outdoors, no protection from the elements and insects, and no care for her personal comfort. She seemed to have no thoughts of herself throughout the whole expedition, but instead was absorbed with the mission, crestfallen by the predominance of palm oil, and kept wondering out loud what we could do to repair things. She lives for orangutans as fully as anyone could.

Around the same time as this trip, news was coming out that the Bornean orangutan had been reclassified on the International Union for the Conservation of Nature Red List of Threatened Species as “Critically Endangered,” which is the direst of classifications, just one step away from “Extinct.” Bornean orangutans probably deserved this classification years ago. The threats that face them are severe and only worsening, whether it be palm oil production, forest fires, growing human populations, pulp and paper production, mining, logging, other forms of deforestation, the pet trade, human ignorance and cruelty, or climate change. 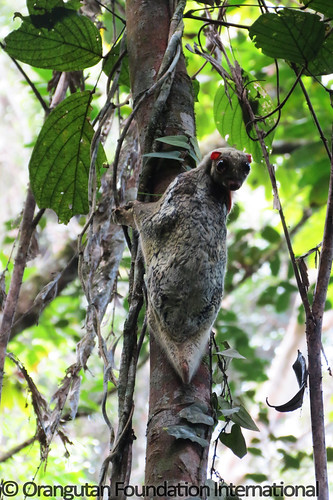 Knowing how grim the outlook is for the future of Bornean orangutans, and witnessing the desperation of the situation firsthand, would push many people to apathy. But Dr. Galdikas is unwavering, and we can all learn from her example. Of course we can’t all abandon our ordinary lives, move to Borneo to scour the landscape for healthy forest, and spend our nights sleeping on wooden porches, all while recovering from a serious ailment. But we can all find ways to display extraordinary resilience in our already established lives. We all influence the viability of Bornean orangutans and other critically endangered species through our daily actions and inactions. We all have a say in how extensively the threats facing orangutans harm their populations through the choices we make as consumers, through the policies we do or do not push for in our governments, through the support we do or do not give to organizations like OFI fighting for orangutans on the ground, and through the efforts we do or do not make to better educate ourselves and others.

On the last day of our journey, after resigning our search and starting back towards home, we stopped for lunch at an empty restaurant on the side of the road, which just so happened to be next to the office of a local environmental advocacy group – ordinary people. Upon hearing Dr. Galdikas was next-door, they came over to discuss an area of rainforest they had been working for years to protect. They just needed someone with influence to help them jump through the bureaucratic hoops. Finally, we had found some promising prospects. 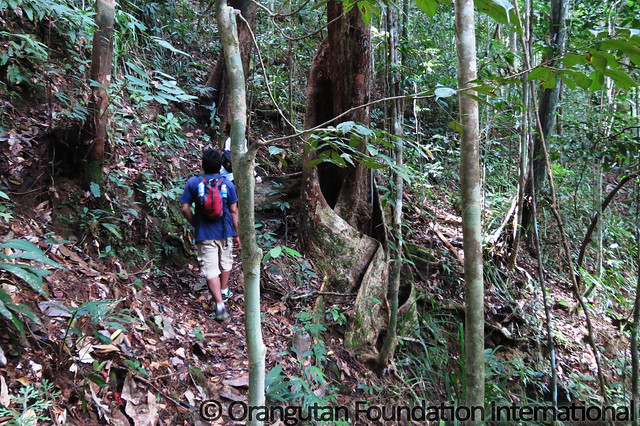 When we start to lose hope for the future of wild orangutans, it is important to remember that some species have bounced back from the brink of extinction before. But only when ordinary people made extraordinary efforts on their behalf.

What will you do in your own life to help orangutans, their forests, and all the other endangered species living in these forests? That is the question we should all be asking ourselves.